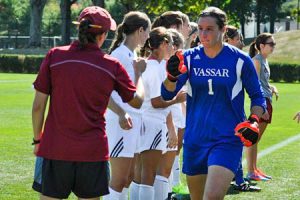 After a long summer training rou­tine and an intense preseason, both the men and women’s soccer teams have already had a strong start so far in their fall campaign. With their seasons well under way, both teams maintain the same end goal, to win Liberty Leagues, thereby quali­fying for the NCAA tournament. In the recent League polls, the wom­en’s team was slated to finish fifth in the League, finishing their 2015 season 8-6-3 while the men’s team was slated to finish third, rounding out their last season 11-6-2. The men are looking to build off a loss in the Liberty League Semi-finals last year. Both teams have returned a signifi­cant number of their starting players while also bringing in a rather expe­rienced crop of freshmen to bolster their roster.

Along with the new players, both teams have a fair number of veteran upperclassmen to help propel their teams to the challenge, as well as a determined and committed coach­ing staff. While the women’s team is certainly on the younger side, with 11 freshmen and four sophomores, Women’s Coach Corey Holten is only optimistic, “The underclassmen make up a great portion of the team. But we also have some great upperclassmen leaders as well. I think we have a lot of great options. I am most excited about the depth and all of the potential options we have. We have incredibly talented players and I am excited about all the different combinations we can put together.”

Senior Emma Nichols spoke of the team size and the new recruits, “This year we have a bigger team than we have had since I’ve been here. With eleven new freshmen we have real­ly looked to integrate them into the group and they have been invaluable to us with what they bring. We have a lot of depth in the midfield and there have been a lot of promising signs in terms of what we are able to do both defensive­ly and offensively.”

On the men’s side, Coach Andy Jennings spoke about the competitive yet nurturing en­vironment that the freshmen come in to, “We are lucky this year we really only graduate two starters from last years team, so it will be competitive for the freshmen, but all incoming freshmen have the opportunity to play. As a team, we discuss the transition process, and the current players are very good at helping them [the freshmen] through it.”

Senior Ben Glasner spoke more about his team this year, “The team has a strong combi­nation of experience and youth. We have a large group of players who have been working with Andy’s tactics for a while and that helps a great deal. We also grow as a team when the young­er members push us forward, trying to make a place for themselves on the starting squad and trying to shape the program into some­thing better than it has been. Everyone comes in determined to win the Liberty League, but it takes the new wave of teammates to rejuve­nate the dream. I feel this is the strongest pos­session-based team I have been a part of. That is not to say the work is done though, we still have areas that need improvement. The fresh­men seem to be transitioning well, adopting our tactics and putting in the work required to develop.”

Strong leadership, especially from within the team is key to any successful season, and it is most certainly a strength that falls in the Brewers’ favor. Upperclassmen leaders such as senior Captain Lucy Brainerd are ready to step up to the plate, “As captain I’m hoping to lead with a team-first attitude on and off the field as well as with a strong presence during games. I’m excited to see us reach our potential. We have 11 really incredible freshmen and overall a very strong roster, so it’s going to be fun to watch us peak.” Nichols agreed, “As a senior this year I’m excited to be a leader and to show the younger players what it means to be a Vas­sar women’s soccer player. On the field, I strive to have a vocal presence and help organize and anchor the team from the back.” Glasner of the men’s team had similar feelings about team leadership, “When we are practicing, the work ethic is critical to keep us ready for games and it falls on everyone, not just seniors, to be leaders. Anything I can do on or off the field to make the team a better environment to play in, and to make our program more successful is a worthwhile endeavor in my eye.”

In addition to team leadership and cohe­siveness, fitness is a major factor in terms of the Brewers’ success this fall. The two teams came into their fall seasons after working hard at conditioning all summer and pre-season to be in their best possible physical shape. Coach Holton spoke of the initiative that her team put forward, “The team took a lot of personal re­sponsibility and held themselves accountable over the summer. They each committed to staying fit, lifting and playing. Our team fitness coming into preseason was quality which has helped us stay healthy.”

Both teams have phenomenal commitment to fitness, something that is required for such a physically taxing sport like soccer. Some of the players participated in club leagues or pick up games for competition simulation and prac­tice. Senior Cosmo Veneziale played for both a men’s league team named Los Blancos and an under-23 club team called NY HOTA. Others like Glasner stuck to personal routines and fit­ness regimens, “I generally did longer distance runs every other day, ranging from 4-8 miles, to build up my cardio. On days when I didn’t do longer runs I lifted, and worked on sprinting and agility. I worked for an hour or more on my technical skills everyday regardless of my other workout, and I did abdominal work every day as well. As the summer neared an end I start­ed to break my workouts into two-a-days to prepare for pre-season.” This kind of diligence tends to have a positive contagious affect on teammates, as sophomore Hayden Van Brewer joked, “just being around Ben Glasner gets you more fit through osmosis. It’s science.”

However, the high intensity workouts and mental toughness necessary makes it all the more challenging when coming off of an inju­ry. Junior Emily Krebs spoke about the hurdles she faced this summer with injury recovery and getting back in tip top shape, “Personally, I had a lot of work to do this summer. I was injured for the last two seasons and this summer was all about getting back in shape and becoming the player I knew I could be for the team. I worked out everyday either running, swimming or biking. I also went to physical therapy and did lifting and conditioning every other day.” Senior Nick Hess added, “As seniors it’s import­ant to push the guys each and every day. Being a role model while at the same time being friends with the younger guys is key as well.”

Off the field bonding is just as important for these Brewers. As Hess described, “This year, just as every year, the team has great chemis­try. We are always laughing with each other and hanging out. Everyone came in pushing each other to be better. The freshmen are competing every day and all of the older guys are helping to make their first year great. I think you’ll see our chemistry build as the year goes on.”

So far this fall, the men’s team has a record of 2-1-2, after beating Maritime 5-0 as well as Rog­er Williams University 5-1, tieing Salve Regina University 2-2 and SUNY-Onteona University 1-1. They have only lost one game so far and that came this past weekend to Manhattanville College with a score 2-1. Glasner elaborated on the team’s style of play, “Last year we had some strong possession, and we played a similar style to this year. The thing we most need to improve on from last year is our determination to grind out results. We need to have a hard fighting in­stinct in combination with our skilled play to compete at the highest level.”

The women’s team continues their season with a record of 3-2 after recently coming up with a big overtime win against Whitman Col­lege this past weekend. So far dropping two tight games to St. Mary College 1-0 and Stevens University 2-1, but rallying back to beat NYU in yet another close overtime game 2-1, following that win with another 2-0 win against West­ern Connecticut. Three out of their five games have gone into overtime, something the team struggled with last season according to Coach Holton, “We want to play a full 90 minutes every game. Last year we were not as consis­tent and this year that is a priority.” Brainerd and Nichols reiterated these sentiments; “We want to be a 90-minute team, a team that plays at 100% strength for the entirety of the match.” With more than half of their games going into overtime and so far winning the majority of them, the team looks like they have made big strides towards improvement already.

The Brewers are ready to keep up the hard work and have very high, but very realistic hopes for the rest of their 2015 season. Coach Holton isn’t going to let the League pin her team into a slotted spot. They are aiming higher, “Our goals are always set high. We are looking to finish in the top four of the confer­ence and be in contention for the NCAA tour­nament. Every conference opponent is quality and there will be no easy games. But William Smith is always a tough match for us.” Coach Jennings is ready to repeat what his team has already accomplished, “We want to win the Liberty League Championship and qualify for the NCAA’s. We have achieved this twice in last four years, so it is achievable.”

Come support the Brewers in their upcoming games this weekend. The men’s team will face Stevens Institute of Technology this Wednes­day, Sept. 16th at 4:00pm at Gordon Field, and the women will look for another win this Satur­day, Sept. 19th at 5:00pm against Manhattanville College at Gordon Field.