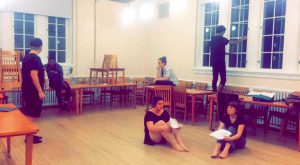 Many actors make their way from the stag­es of Vassar to those of Manhattan and beyond. But fewer make this transition and then catch a train back to Poughkeepsie for class the next day. Juliany Taveras ’16 is one of those actors. She wrote and performed “An Empty Glass” last year and just recently dis­covered that the play was accepted to a com­petition in Manhattan. She explained, “I wasn’t sure whether I would even apply—but, as more of a joke than anything else, I took a screenshot of the email I’d been forwarded and sent it to my cast, using a Facebook group message we’d formed when we all got together in April for Unbound’s first Staged Readings Festival.”

Co-director of the play, Taylor Dalton ’15, elaborated, “Julli [Taveras] messaged the cast with the MRT ad and was like ‘hahaha look guys’ and I was like ‘stop laughing if you don’t submit your play, I will.’ So she submitted it be­cause I threatened her, really.”

This joke turned into a reality when the play was accepted into the Manhattan Reperto­ry Theatre’s (MRT) annual Fall One Act Play competition. According to Taveras, “No part of me genuinely thought we’d be able to do it. But the next thing I know, the entire group (my co-director and now alum Taylor at the helm) was squawking at me to submit to it anyway. So I did. Within a few days, I’d been accepted to compete, and I guess the rest is history.”

Taveras learned about MRT during her sum­mer internship with Girl Be Heard, a social justice theatre company. The small theatre was created in 2005 and hosts plays, workshops, competitions, classes and events in the heart of Times Square. “An Empty Glass” will be fea­tured alongside 29 other plays in its yearly Fall One Act Play Competition. “The competition sought applications for plays that had already been cast and produced,” explained Taveras. The best play receives a $1000 cash prize.

Taveras wrote the play last fall when she was studying abroad. “It was part of an indepen­dent study I completed in London, in which I sat down with the intention of exploring ideas of ‘home’ and how to tell certain stories using theatre as a medium,” she explained.

London proved to be the ideal place for Tav­eras to write a play. “It was actually a relative­ly quick writing process (London offered me quite a lot of free time, relative to the chaos I’m accustomed to here), and it’s wild to me how far I’ve taken the project, a year later,” she ex­plained.

The play was first performed last year when Taveras returned to campus. Dalton ex­plained, “It was one of the first participants in Unbound’s Series of Staged Readings, which showcased a few student-written pieces in the Spring of 2015.”

Angela Brown ’16 didn’t see the play last year but is traveling to Manhattan to see it in competition. In an emailed statement, she said, “Even though I wasn’t able to see the show on campus, I was very present with those involved and heard many a conversation about the vi­sion/process. It was so free form; it managed to create itself without using the usual oh so mapped out ~Vassar Theatre~ paths.” Brown is interested in seeing a different kind of audi­ence that the show will attract off campus. “I’m so excited to look around at the audience and wonder how these energies will resonate with them,” she said. “Being in an audience at Vas­sar comes with a certain vocabulary– protocol, even. So I wonder what an audience with a dif­ferent vocabulary will feel.”

But performing the play off campus has a unique set of difficulties. “It’s not easy to re­hearse in Rocky the entire time and then get used to a tiny theater on the outskirts of Times Square in a day’s time,“ explained Taveras. The cast could not actually perform in the actual venue until the dress rehearsal one day before opening night. Taveras added, “And of course, there’s the daily road trip to and from the city (gas? parking? where’s that grant I applied to three weeks ago?).”

Nevertheless, the experience has been valu­able for the cast. “I go home every single night… and feel unbelievably blessed,” explained Tav­eras. “I am working with some of my closest friends and a group of fantastic performers/ artists/thinkers/movers/shakers. They couldn’t mean more to me.”

Dalton has similar feelings about the experi­ence. She explained, “This play has brought a playwright I believe in, a work that affects me deeply, and a cast that inspires me with their honesty together into one project. So my expe­rience has been incredible. To say the absolute least.”

The cast in particular makes the play so spe­cial for Dalton and Taveras. According to Dal­ton, “This cast… is an incredible group of stu­dents/artists/theatre-makers/activists/lovers/ thinkers that has come together to produce one of the most impactful one-act plays I have ever had the privilege to see, yet alone be a part of.”

After the competition, Taveras hopes the show will return to campus. “At the moment we’re just trying to make it through this last week,” she said. ”But then we definitely want to talk about the possibility.”

But even if the show doesn’t make it back to Vassar, these last few weeks will leave a lasting mark on Taveras. She continued, “This pro­cess has meant more to me than I could have ever known. We’re still taking it day by day, but when it’s all over, I know it won’t actually be over. We’ve all changed each other in some way, and I know it won’t be the last time we work together. I can feel it.”