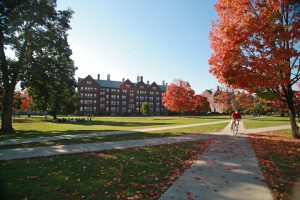 Sometime in the faint pre-dawn glow of the year 2008, Vassar College acquired a magi­cal artifact we now know as The Sorting Hat. For four years after, Associate Director of Res­idential Life, Rich Horowitz, retrieved the hat from its hiding spot and used it to assign fresh­man year roommates. Now, Horowitz said, “I’m anxious to bring the hat back to life after its three-year slumber.”

But, resurrecting The Sorting Hat might be more difficult than it appears. Part of the prob­lem is that the location of The Sorting Hat is yet undisclosed. There are reports from Assis­tant Director of Residential Life Anders C. Van Minter, who suggests, “There is a womp womp who protects the hat.” As anyone who has come across one of these furry ferocious crea­tures can attest, retrieval of the hat would be no simple or safe task. It may be well worth it for Horowitz though, who believes an element of magic is crucial to the selection of freshman year roommates.

Each year, a standard survey is sent out to all admitted students. Horowitz described the sur­vey in an interview, saying, “Our survey begins with some of the most basic match/mismatch issues, such as interest in all female or Well­ness housing, whether a student is a smoker and/or willing to live with a smoker, sleep hab­its and cleanliness,” Horotwitz noted.

Before the survey ends however, the residen­tial office’s standard line of questioning takes a sharp turn.

“Do you believe in magic?” The question first appeared on the survey in 2008, the same year that The Sorting Hat was acquired.“My sense is the question itself offers the possibili­ty of some magic while students are answering these questions and lost in a world of the fu­ture in which there’s so much excitement and anxiety swirling around and clouding things. I think it gives reason for pause and, generally speaking, I think it’s in these pauses that the best stuff happens.” Remarked Horowitz.

“The groovy stuff aside,” Horowitz contin­ued, “it’s a fun question and a great song by a band with one of the best names ever.” Al­though asked in specifics about how the ques­tion of magic influenced Horowitz’s decision making process, he declined to comment. We may suppose that a magician never reveals his secrets. In any case, Horowitz suggests that “by the end of the survey, students have had the opportunity to provide a fairly comprehensive snapshot of who they believe they are.”

While Horowitz and others at the Office of Residential Life may think that the survey pro­vides a rather straightforward measure of stu­dents’ habits and personality some students are of a different mind. Many students are inclined to second guess the survey questions in an at­tempt to anticipate with whom they might end up rooming.

Perhaps the most difficult question to pre­dict for students is the one about magic. Lily Shell, ‘16, said she answered “maybe.” Shell ex­plained, “I wasn’t sure if I would end up with someone really weird if I answered ‘yes,’but I also didn’t want to end up with someone who was no fun at all.”

For others, like Peter Galer ’16, “Initially, the question about magic felt like a curveball. But after consulting with my brother, I realized I couldn’t say no. I think it has to be yes or may­be. We go to a liberal arts college.”

The introduction of magic and online survey software that was brought about in 2008 was a stark departure for Horowitz and the rest of the Residential Life office, who had previously relied on snail mail to get the word out about selection.

Horowitz arrived in 2005. “That year’s se­lection was a chaotic scramble,” Horowitz ex­plined. It was difficult for Horowitz and team to match up the paper applications that they received from students and assign them room­mates. “I relied heavily on help from house ad­visors and our student workers to get the job done. Even after that, however, there was a mad dash to print the letters, stuff the envelopes and then send them out,” He said.

In 2008, the college saw the introduction of The Sorting Hat accompanied by a lightening of spirits, and the lightning fast technology of online surveys and files. But, as Horowitz notes, “while things have become easier, the need to find the time to slow things down enough to do the work well is the annual challenge.”

In addition to time concerns, for Horowitz, “there are many things that can help make or break a roommate match. Similarities may ac­tually be good or bad and the same can be said of differences. It seems to me that the key in­gredient for any success in any match is kind­ness, consideration and open-mindedness.”

Incoming freshman have had the opportuni­ty, since 2008, to choose their own roommates, or leave it up to the department and the luck of the draw. Horowitz said, “While some students each year choose this option, most students go old school, and allow the sorting to happen.”

Despite some students’ concerns that the survey questions do not accurately reflect their personalities, the element of magic Horowitz introduced gives students reason to trust they will be sorted well. And if things don’t go quite as well as they’d hoped, they can always switch.

Come next fall, it might be time once again for Horowitz to make his journey to the womp womp’s lair and retrieve The Sorting Hat. Soon, Horowitz might renew that age old feel­ing of magic which clings to our dormitories’ hallways, and simply won’t get out of our mat­tresses.