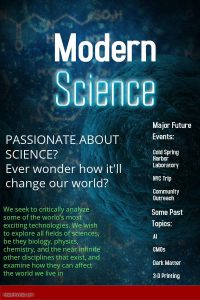 A scientific revolution has begun at Vas­sar this semester, led by a new pre-org called Modern Science. “We have had a great response,” Jay Kim ‘17, co-founder of Modern Science said, sitting across the table in the Re­treat. At the activities fair, for instance, the club put over 100 new names on their mailing list. “We really do want to help implement the sci­ence here at Vassar and create awareness about it, but we want to do it in a way that also suits Vassar as well,” Kim explained. “It’s just a real­ly nice thing, I think, to have a space for science at Vassar, because historically it’s been pretty neglected.”

Modern Science was created two years ago by Peter Kim ‘17. “It was actually called Vassar Scientific Literature Club, and that was this idea that people who are actually interested in sciences could look at research papers,” Jay said. He went on, “It was inactive for about a year, and at that point I contacted Peter and I said I was just really interested in the club, and I wanted a chance to actually help provide it. So at that point we started doing Modern Sci­ence.”

The important part about Modern Science is that it is accessible to everyone, not just sci­ence majors. “We want a lot of diversity,” Jay said. “We want to be very complimentary to­wards the humanities and social sciences. We don’t want the sciences to be a completely sep­arate discipline.” He gave the example of a dis­cussion of artificial intelligence (AI) that was brought up at a meeting last year. “We didn’t talk about it just in the scientist’s perspective. We talked about it in ways a political science major, for example, could see how the structur­al effects of AI could actually be implemented by society. You could do law, you could pretty much use it to learn how to prevent certain dis­eases from occurring.”

Modern Science opened to the public just this year. Last year, Jay explained, was the “beta phase,” and the club was only eleven mem­bers. Throughout the year, the club was able to smooth out its flaws, as well as test out meth­ods of sharing Modern Science with the entire Vassar community.

Their most immediate issue was the mate­rial they were covering during meetings. “We realized that no one really wants to read sci­entific research, at least not for fun,” Jay said. “We just sent out emails with articles that were a little more accessible,” he added. Those ar­ticles came from sources such as Nature and PopSci. “Nature isn’t just pure scientific arti­cles. The journal also has accessible articles for the public. PopSci was another one we use,” He explained.

The main concern for Modern Science is that not just science majors, or not just pre-med students will feel comfortable at their meetings. “We used a lot of articles that are more accessible and directed to the public,” Jay said. “You don’t have to come in with spe­cialized knowledge at all. It was just stuff that would be really interesting and fascinating to read about, something that would really grab you in.”

Even in the beta phase, Modern Science wanted to offer the full experience of being a pre-org at Vassar. “Last semester we actually had Professor of Physics, Zosia Krusberg do a lecture that was pretty popular, but she is gone now, unfortunately. I’ve asked a couple of other professors, as well, math professor Ming- Wen An Wissmann, and other executive board members of this club have also branched out to other professors as well,” Jay said.

This year, Modern Science wants to contin­ue offering the lecture series, since it benefits both the teachers and the students. “So hope­fully we could get a teacher to do a lecture every month next semester, since we have too many events this semester,” Jay said. He con­tinued, “It’s something we’re really looking for­ward to. Because I know when I was looking for a major advisor, I just looked online, and that was just as much as information as I could get. That’s not really a nice way to do it, though.” In addition to finding major advisors, seeing more of professors outside the classroom helps students get to know the types of people from whom they are learning.

“We want to do something like a sit down with faculty dinner,” Jay went on to say. “Be­cause I feel like if you’re at Vassar, a lot of people don’t know anything about professors unless you take a class with them, and even if you have a class, you really don’t know what the professors do. So we want to increase com­munications with faculty by doing a dinner. It would be a really casual dinner where we could just get to know the professors in a very casual and nice way.”

Now that they are open to the wider Vassar community, Modern Science had its first public showing last Friday. “We were on the Library Lawn, just because that would be more public than any other area. It also would be easy to move around in a group format,” Jay said. The event began at 3 p.m., which turned out to be slightly problematic, perhaps ironically so, due to lab conflicts.

Jay added, “It was just a method of getting our name out there for anyone that was inter­ested in the club. It was more creating aware­ness of what we’ve done in the past, and an idea of what our discussions will be like for general body, plan events, and plan the lectures we’re doing this semester.”

This semester, Modern Science plans to take on an ambitious amount number of events. “One of the bigger trips that we’re planning on doing this semester is, and it will still be open to the public of course, is a trip to New York,” Jay said. “That will just be more for fun and bonding, but it will also be visiting places like The New York Hall of Science, the American Museum of Natural History, the Rose Center, which is an observatory,” he added.

Another trip they have planned is to the Cold Spring Harbor Laboratory, which is a highly-ranked laboratory only a couple of hours from campus. “We want to try to arrange a dinner with the researchers there, as well, so we can communicate with them to see what’s happening,” Jay said.

There is plenty of excitement surrounding Modern Science and everything they hope to achieve this year. Their first priority is to make the sciences more accessible. Even Jay said that the sciences are not his first choice, “To be honest, I’ve been more of a math person,” He said. “I am pre-med, and knowledge can just pop out at you in so many ways that you don’t expect it to. Sciences have always been a way of exploring the world around us, and there’s so much that we don’t know, and I feel like it’s just so interesting to find out.

Modern Science meets every Monday 6 p.m. to 7 p.m. in the Deece Dodge room. While the newly minted pre-org hopes to revolutionize the sciences at Vassar, Jay concluded, “I think science really is a tool for revolutionary change in people’s lives.”