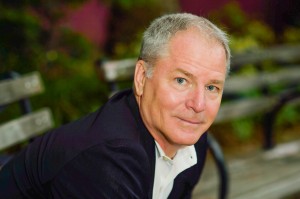 Mohamedou Ould Slahií’s voice can just barely be heard from behind the tightly sealed gates of Guantánamo Bay. Although his words passed through the bars al­most ten years ago, Slahií reamins there, fourteen years after his incar­ceration. The freshmen class read Slahií’s story over the summer.

In this year’s freshman common reading, the incoming Class of 2019 was presented with the book, “Guantánamo Diary,” written by Mohamedou Ould Slahi. Writer and human rights activist Larry Siems who edited, introduced, and anno­tated the book, presented this year’s STARR lecture, “Finding Mohame­dou, Finding Ourselves: Uncensor­ing the Guantánamo Diary” on Sept. 24 in the Villard Room

In addition, Siems gave a short background introduction of the book for incoming freshmen on the Freshmen Common Reading Program 2015 Moodle page. “It’s remarkable that we even have this book, really,” He said in the video.

He went on to say, “Mohame­dou, who wrote this book in 2005 in an isolation cell in Camp Echo in Guantánamo, wrote the 466 page manuscript by hand in English, his fourth language, a language that he learned almost entirely in Guantánamo.” Whenever a prison­er writes anything, Siems said, it is considered classified from the mo

ment it’s uttered. “This manuscript was taken away, taken to a secure facility inside of Wash­ington D.C., and stayed there for seven years,” Siems said.

The autobiographical book shares personal stories about Slahi’s time as a prisoner in the infamous Guantánamo prison. Readers are exposed to the injustice Slahi suffered at the hands of the military; some of which include (but are not limited to) blaring heavy metal music, sleep deprivation, false letters from fam­ily, forced lack of hygiene, elaborate kidnapping schemes and blatant sexual harassment.

In a video on Moodle, Professor of Psychol­ogy Randy Cornelius explained the “Value of Emotion” in the book. He said that as he read, “Even as Slahi is being treated like a dog, be­ing forced to endure all kinds of deprivation, torture, injustice and so-on, he never-the-less often responds with kindness and compassion. These reveal a certain kind of man with a cer­tain kind of values.”

Sponsored by the Dean of Faculty, the Fresh­man Writing Seminar Program and the Vassar First Year Program, the STARR lecture will ex­pose freshmen, who spent their summer read­ing “Guantánamo Diary,” to the realism of the situation.

In the lecture, Siems confronted the issues illuminated in Slahi’s book. Among one of the challenges faced with publishing the controver­sial Guantánamo Diary was the legal struggle to release Slahi’s original manuscript. After seven years, the government finally allowed for the release of the book under the condition of 2,600 black bar redactions and censorship lines.

“Finally in the summer of 2015, they were able to hand me a disk that had a PDF file that was the government’s declassified version of the manuscript,” Siems said.

Those lines, Siems said, still keep the much of the public from reading the full truth of Slahi’s time spent in Guantánamo. Siems said, “Even so, it’s an amazing story.”

The Class of 2019 was introduced to “Guantánamo Diary” in the early summer when they were instructed to read the book and discuss it on Moodle. Vassar Faculty post­ed thought-provoking questions about the readings and allowed students to respond. For instance, in “The Prisoner’s Voice,” English Professor Amitav Kumar asked, “How, in the account that you are reading, does the subjec­tivity of the prisoner rise to the surface and af­fect us?”

Professor of History on the Eloise Ellery Chair, Rebecca Edwards offered her own advice on how to read the book, saying, “Maybe stop and take a walk now and then.” She added, “If a certain passage confuses you or stresses you, read it again, and think about it some more.” The professors’ videos offered a preview of what freshmen could expect from both Siems’ lecture, and from Vassar classes from a range of departments.

The freshman common reading is selected by the Writing Subcommittee of the Committee on Curricular Policies. Dean of Freshman and Professor of English Susan Zlotnick explained, “When choosing the book, we keep in mind the books that have been selected in the previous years and try to—over the course of four or five years—select books that represent the range of subjects taught at the College.”

She added, “‘Guantánamo Diary,’ which re­counts Mohamedou Ould Slahi’s extralegal rendition, imprisonment and torture in the name of national security, opens up a space for thinking about recent US policy. Our incoming freshmen have grown up in a world defined by the events of 9/11 and the conflicts, including the ‘war on terror,’ that followed. Guantánamo Diary fills in some of that recent history for our students.”

Slahi’s story is not an easy one to hear. Sla­hi, barely over thirty, received a call from the police to come in for questioning in his home country of Mauritania, Africa on November 30, 2001. “It was voluntary,” Siems said. He believed he would be home by the next day. Siems ex­plained, “Instead, the Mauritanian government held him for a little over a week while the gov­ernment of Jordan arranged a rendition flight to pick him up, and took him to Amman, Jordan where he was interrogated at the US request for eight months in a Jordanian intelligence pris­on.”

The Jordanians concluded that he wasn’t who the US thought he was, and were ready to send Slahi home. However, Siems said, “They sent him on to Guantánamo on August 5, 2002, and he has been there ever since.”

Throughout the novel, Siems left commen­tary and notes referring to and explaining the redactions that scatter the book. About the top­ics that were discussed at the lecture, Zlotnick ensured, “Larry Siems will address a variety of issues, including the challenges of editing a heavily redacted manuscript, but also the im­pact that the release of Slahi’s diary has had.”

The Writing Committee sponsored a public reading of selections from Guantánamo Diary in the library during the first week of classes to underscore the fact that we could not bring Slahi himself to campus because he’s still im­prisoned.

Siems said, “I think what happened to him [Slahi] at Guantánamo is at the heart of ‘Guantánamo Diary,’ and it’s a pretty harrowing and disturbing story. I think for anyone who is an American citizen, a student or somebody who studies the principles by which this coun­try was founded, you’ll find a pretty troubling story.”

The lecture is open to anyone. Students, faculty and alumnae are encouraged to attend. Those who have not had the chance to read Guantánamo Diary need not fear. Zlotnick ex­plained, “I’m sure Siems will provide enough context to make the talk valuable to all mem­bers of the Vassar community.”

In this way, Siems explained, “He is able to tell a story in which he is primarily interested in the human side of what is a very dehuman­ized place. We get these amazing portraits of in­terrogators and guards, people that are in your neighborhoods, probably, now having come back from Guantánamo having served there. People we never hear from because they don’t get to talk about their experiences, either.”

This book, Edwards said on Moodle, is a challenging, and possibly even disturbing read. In a world still recovering from the devastation of Sept. 11, shrouded in the perpetual fear of for­eign conflicts and terrorism, this enlightenment is an important part of Vassar students’ knowl­edge of the world. Edwards said, “At the heart of a modern, liberal arts education, is willingness to confront discomfort and complexity and dif­ficult questions.“