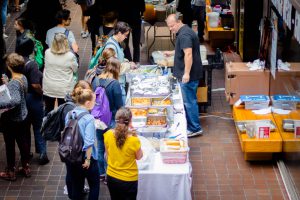 There are not many campus traditions that are as widely appreciated as Tasty Tues­days. Every Tuesday, as the name suggests, a few restaurants in Poughkeepsie that are just a little too far for students to walk to set up stalls in the College Center to sell their food. While there are many student favorites, the longest line tends to be for the Indian food from Kismat.

For any returning Vassar students, they will have noticed, however, that on Tuesdays, that corner of the College Center looks a little dif­ferent this year. This is because Kismat was not welcomed back. There have been rumors float­ing around, but none of them were justified by either Kismat or VSA.

The owner of Kismat Sammy Ahmeb said, “I loved doing Tasty Tuesday. I had been doing it since 2009, and I don’t know why Vassar hasn’t invited me back this year but I respect their de­cision.”

The VSA explained the situation in a little more detail. Vice President of Operations, Ruby Pierce explained, “All vendors have to sign a contract as well as provide proof of insurance and a health department permit.”

She went on to say, “Kismat was in viola­tion of the Tasty Tuesday contract in regards to complying with requests from the Campus Activities Office.”

Kismat and Vassar are by no means on bad terms. “I can promise that there was fair and due process in alerting them to this violation and giving them opportunity to revise their practices. The violation continued, and we had to let them go,” Pierce said. Ahmeb said, “I am more than willing to follow all the rules.”

Although they can’t take part in Tasty Tues­day this year, Kismat has started offering lunch at reduced prices Monday through Saturday. Ahmeb is confident that the business that he started will still succeed despite his departure from Tasty Tuesday.

Ahmeb has a long history with food. “My family started a Bangladeshi restaurant in 1943 in Manhattan that has branched out into over sixteen restaurants,” He said. “I learned how to cook from my uncle and brother and worked with them for a time,” He added. The type of food he offers at Kismat is his specialty. Ahmeb explained, “I have specialized in Malabari cui­sine, which is a type of South Indian cuisine.” Kismat will be missed, but Tasty Tuesday must go on.

The event does not happen on its own. Pierce, who is in charge of which restaurants are included in Tasty Tuesday, explained the selection process. “We take into consideration what kind of food students want to eat and which restaurants are willing to participate. There are some vendors who have been here for years, so we invite them back,” She said.

There are some issues, occasionally, with finding restaurants that are willing to relocate to the College Center for a few hours every Tuesday. “If we catch word that students want someone to come, we work on getting that to happen,” Pierce went on to say. “Not all restau­rants want to participate, though, even if Vassar wants them here.”

Without Kismat, Tasty Tuesday has not been short of food. Ku Yah, for instance, is one restau­rant that specializes in Jamaican and West Indi­an cuisine. As the description online explains, “Their vision was to bring an elegant dine-in restaurant to Poughkeepsie which would be an element of surprise in this small town, hence the Jamaican patois expression of surprise, ‘Ku Yah.’”

The Carribean restaraunt settled in Pough­keepsie in 2011 and has been coming to Vassar for Tasty Tuesdays ever since. The owner of Ku Yah, Winston, said, “We originally wanted to start a French bistro in the nineties. But our kids kept us busy and we put it off until a couple of years ago.” He added that Vassar students give them good business, and will hopefully contin­ue to do so.

Love Feast is a new addition this year. Kamini Oppenheimer, who runs the Love Feast stall at Tasty Tuesdays serves vegan Indian food such as black-eyed peas, black bean and sweet po­tato curry and ‘channa saag,’ or chickpeas and spinach.

She started catering in Millbrook in 2011, and said she has finally found her passion with Love Feast. “I’m finally doing something I really en­joy,” She explained. Her love of experimenting with different cuisines helped her create the idea behind the food she offers.

Tasty Tuesday is an alternative every Tues­day for the Deece, Express Lunch or the Re­treat. While it may not be a lasting tradition for some vendors, it has been a tasty treat for students since 2008.