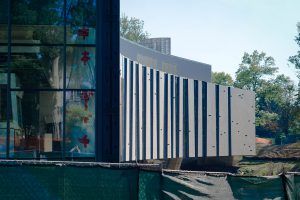 Vassar has been committed to science as a part of the liberal arts education since it hired its first professor in 1865, the renowned astronomer Maria Mitchell.

Recently the College has been working to­wards bringing its science facilities and pro­grams up to par with its arts divisions. Although the College currently houses the Biology, Chemistry, Cognitive Science, Computer Sci­ence, Earth Science, Mathematics & Statistics and Physics & Astronomy in various buildings around campus, a new building is set to unite the programs when it opens at the beginning of next semester.

Dean of Strategic Planning and Academic Resources Marianne Begemann, who has spear­headed the project since its inception, noted that the Bridge will be installed with the latest scientific equipment and resources. She ex­plained in an emailed statement, “[The Bridge] will have laboratory space for teaching envi­ronmental and earth science courses, shared facilities including a robotics lab, fabrication facility (electric and machine shops), a stock­room/storage facility, phytotron, herbarium, vi­sualization lab, teaching spaces, administrative suite, offices, a cafe with seating and outdoor patio, as well as shared open common spaces for study and small group gatherings.”

At 80,000 square feet, the building is also much larger than any other academic building at Vassar. According to Professor of Chemistry Joseph Tanski, who has been involved in advo­cating for an updated science space on cam­pus since the 2003, in order to to ensure that it would not be incongruous with the existing buildings, the Bridge was designed to serve as a link between areas of campus. Tanski confirms, “The proximity and overlap between sever­al science departments will make it easier to work together collaboratively and will enhance the experience for students.” In an article pub­lished in The Alumnae/i Quarterly, Beth Dun­lop ’69 noted, “Its structural system will allow for the use of lighter materials–glass, metal, and mesh–that will make its gently curved form seem almost to float across the landscape.”

Significant efforts have been made to ensure that the Bridge is as ecologically conscious and responsible as possible, especially becuase it is situated directly above the Fonteyn Kill, which runs from Arlington through campus between Olmstead and Skinner Hall. Environmental ini­tiatives for the integrated science center project include wetland restoration on the Kill and res­toration of the Edith Roberts Ecological Labo­ratory, the wildlife area surrounding the stream.

The addition of the Bridge building is not the only alteration Vassar has made to its science facilities, however. According to Begemann, major renovations to Olmstead Hall, New En­gland Building and Sanders Physics were com­pleted earlier this year. The renovations are part of the larger Integrated Science Center project that includes the new construction.

All buildings involved in the project are Leadership in Energy & Environmental Design (LEED) certified. Tanski notes, “[The consid­erations] include energy considerations such as heat recovery from the Bridge air exhaust and lights on timers, wildlife friendly bird safe glass, rainwater collection for irrigation, the use of local materials such as the bluestone in the Bridge and low VOC building materials.”

In addition to the College’s general concern for keeping all of its facilities renovated, the renewed focus on developing space for the sci­ences has been one part of a campaign called Vassar 150: World Changing. The fundraising campaign concluded in June of 2013 and, with $46 million raised for the new science center alone, enabled construction to commence.

The Bridge building nearing its opening on Jan. 4, 2016, is to many the culmination of years of hard work, and the next great step in Vassar’s history. Tanski remarked, “Many of Vassar’s peer college’s have renovated or built new sci­ence facilities in recent years, and our science project is part of Vassar’s commitment to being a leader in liberal arts education.”