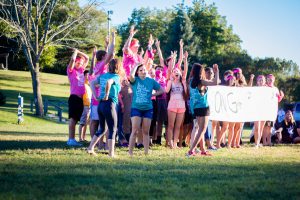 At Vassar, traditions are constant­ly changing, taking on different meaning to students and evolving with the campus culture. Serenading is one such tradition, constantly in flux due to its controversial reputa­tion on campus.

This year’s Serenading, which took place on Sunday, Sept. 20, proved lit­tle different, as students and admin­istrators grappled with where the century-old tradition was to go in the future in light of decreasing student interest and rising concerns among students about the event’s historical connection with hazing.

Serenading is among the oldest ex­tant traditions at Vassar, along with other events dating back to the 19th century such as Founder’s Day, the Daisy Chain and Salve Night.

Originally called “step-singing,” Serenading began as an oral tradi­tion in which the junior class sang to, and passed along marching songs to, freshmen, who would repeat the process in their junior years.

In recent decades, however, the tradition had changed greatly, and many came to view it as unsavory. As the Vassar Encyclopedia puts it, “In recent years, it has devolved into more of a food fight than a song fest—a free-for-all in­volving ketchup and chocolate sauce” (Vassar Encyclopedia, “Vassar Traditions”).

This “devolution” is the cause of why, in the eyes of many students, administrators have recently imposed several changes to Serenad­ing to halt elements of the tradition that many consider to be hazing. These alterations have included a restriction to limit the food-fighting and to a water balloon fight before freshmen sing, and, in the case of this year’s instalment, a decision by the Administration to move the event to the Sunday of All Families Weekend.

In spite of the College’s efforts to clean up the reputation of Serenading, many students remained skeptical of the power dynamics in­volved in the tradition, arguing that only a very slim minority within the freshman class actual­ly expressed interest in participating, whereas some others were openly concerned by it.

According to Noyes House President Ashley Hoyle ’18, most freshmen in her house that she asked for feedback were more confused than excited by the tradition, and didn’t follow why it was scheduled to take place during All Fam­ilies Weekend. “Generally, they don’t under­stand what the point is and they don’t want to take the time away from some of the families that are going to be here,” she commented at a VSA Council meeting on Sept. 13.

Likewise, Josselyn House President Cecilia Hoang ’18 asserted that, due to similar feedback, she and other house presidents were faced with the uncomfortable decision between uphold­ing the College’s tradition and responding to input students they were elected to represent. “This is their experience. We can’t take that away from them,” Hoang posited, “but if it does turn out that they reach a near consensus about not wanting to participate, is it plausible that my obligation to respect what my house wants to do takes precedence over my obligation to a tradition?”

On Sept. 18, after extensive conversation among their respective constituencies and house teams, Hoyle, Hoang and Davison House President Nathaniel Lindley ’18 released an offi­cial statement announcing that their respective residential houses would not be formally par­ticipating in this year’s Serenading.

The statement read, “As bodies commis­sioned to uphold ResLife’s mission of culti­vating an empowering, socially conscious, and responsible environment, we feel that, in order to maintain the dignity of our houses and their residents, we must distance ourselves from an event which verges on hazing. This decision has been reached in response to sentiments within our respective houses.”

It went on to note, “Some freshmen have reported that the prospect of this event makes them feel ‘anxious’ and ‘unsafe…’ Because this event consistently results in an uncomfortable and unsafe environment across campus, it is clearly time to reevaluate and enact change.”

Although freshmen from non-participating houses who did wish to take part in the tradi­tion were encouraged to tag along with other residential houses, only a handful did so. In­stead, the majority of freshmen and house team members from the non-participating houses walked to Ballantine Field together in solidar­ity after the end of the water balloon fight and singing had ended to take part in the remaining events of the day, including a pizza picnic and a fireworks show.

Some students, however, have questioned the validity of claims that Serenading qualifies as hazing, and remain critical of the houses who opted not to participate. They insist that those who believe Serenading to be a form of hazing are simply being hypersensitive to the issue. Many students took to the ever-controversial, anonymous social media outlet YikYak to voice their criticisms.

One person posted, “None of that was haz­ing. Way to just come for the food.” Another commented, “Freshmen shouldn’t participate in the fireworks because it’s a form of hazing.”

Hoang, however, maintained that she, Hoyle and Lindley acted in their constituencies’ best interests and meant no offense by their late ar­rival to the event. “We respect the house teams, the Senior Class Council and the Traditions Committee for all the work that went into [Ser­enading], because that’s not insignificant,” Ho­ang asserted at a VSA Council meeting on Sept. 20, shortly after Serenading had ended. “But the fact is that there are opinions out there that are calling our decision-making process autocrat­ic, selfish, lazy, deceitful…It’s hurtful, frankly, and untrue. I can say confidently that we spent a great deal of energy to ensure that we were representing, to the best of our abilities, what our constituencies wanted.”

She went on to say, “I don’t think that the loudest voices in the rooms are the only ones that ought to be heard…We each have received a multitude of emails, hand-written notes slipped under our doors and face-to-face interactions with people thanking us for thinking with their interests in mind.”

The nature of Serenading has long been a topic of uncertainty, and its future even more so. Although the VSA Traditions Committee is in name responsible for such events, few stu­dents are aware of precisely what role it plays in them, and many have begun to question the purpose of the nascent group if the College’s leadership can commandeer the event through administrative actions.

In response, VSA President Ramy Abbady ’16 resolved to address such concerns soon, suggesting that a committee tasked specifically with organizing Serenading, clarifying underly­ing uncertainties surrounding the tradition and trying to craft a future for it that would appeal to future students in a way that did not resem­ble hazing.

However the future of Serenading will turn out, there is little doubt that it will remain a contentious issue in years to come, whatever it may look like.