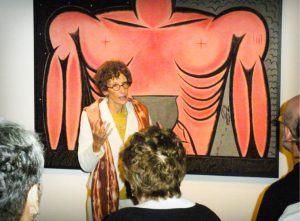 Lurking in the basement of the Frances Lehman Loeb Art Center are dozens upon dozens of artistic works that have not seen the light of day in years. Yes, there’s more to the Loeb than Picasso and cheese plates. In anticipation of an exhibit opening in January, Latin-American Art: Fluid Ecologies, former San Francisco University and UCLA Professor Judith Bettelheim will be giving a lecture on Oct. 1 in Taylor Hall at 5:30 p.m. In the lecture, she will discuss several pieces of artwork that will be some of the highlights in the exhibit.

Discussing two pieces by renowned Cuban surrealist José Bedia and one piece by Wifredo Lam, considered a grandfather figure to Latin American art, Bettelheim will shed light on how these works fit into their artists’ collect­ed works and Latin American art as a whole.

Curator of the Fluid Ecologies exhibit, Lisa Paravisini-Gebert, who is also a Professor of Hispanic Studies and the organizer of this lecture, expressed her excitement in having Bettelheim give the lecture, saying, “We have these pieces at Vassar and we don’t know very much about them. Here is perhaps the best person in the world at this moment to actu­ally help us understand something that we own, that is part of our collection. Because Latin-American art has not been a central as­pect of the mission of the Gallery, although we want to make it one, it is not a piece that has been extensively studied. So what I see about her visit to Vassar is this opportunity to hear from the expert about something we own and know very little about so we collectively can learn about it.”

Several years ago, Bettelheim curated an exhibit at UCLA and the University of Mi­ami on Bedia, and within the art world she is held with high esteem, considered almost a grande dame of Latin American, specifically Cuban, art. The foremost expert on Bedia’s catalogue, she will be able to elaborate on his work and explain the influence he has created, which hopefully should attract a great deal of students to become interested in the exhibit and diversify the Gallery’s collection of art. During a lecture at the Miami Art Museum, she explained how Bedia’s works caught her eye, “I was introduced to Bedia’s work during a lecture by Charles Merriweather…I was im­mediately enticed…[I] considered it stunning. especially the way the young artist skillfully merged references to his Cuban religion with a complex experimental installation.”

Bettelheim has also written numerous books on Afro-Cuban art. Several of her writ­ten works focus specifically on Bedia and Lam. She has also received many awards for her contributions to the academic world, in­cluding several grants and national endow­ments.

The three pieces that Bettelheim will focus on were purchased as part of a donation giv­en by an alumnus in the 1990s, with a provi­so that the money be used specifically to buy Latin-American art. Most of the other works bought with that donation will also be fea­tured in the Spring exhibit. This exhibit will act as both a thank you to the alumnus who supplied the works and an opportunity for this art to gain the attention it deserves.

It will be Paravisini-Gebert’s first time cu­rating an exhibit, but she feels that it is neces­sary to have an exhibit on Latin American art, because the art has so much cultural power. Paravisini-Gebert also intends to use the ex­hibit as an opportunity to bring the commu­nity closer, inviting not just Vassar clubs and students, but the surrounding colleges, high schools and middle schools to have the im­pact of this exhibit be greater. She will also create a website for the exhibit so that guests can learn more background information be­fore attending.

The LatinX clubs and classes on campus are encouraged to supplement their learning with a visit to the exhibit. Sarah Sandler ’18 [full disclosure: Sandler is a staff writer for the Misc] is currently taking LatinX Literature, which piqued her interest in the topic. “We’ve only talked a little bit about Latin-American Art so I’m excited to see how these works tie into the literature and culture we’re learning about,” she explained.

The role that diversity plays can alter per­ception one has about a community. Paravis­ini-Gebert found the works to be much dif­ferent than what one would conceive as Latin American Art. Describing how vast the topics of the artworks for the exhibit are, she said, “They’re not stereotypically what we would expect from Latin American artists. Some of them are political, others are ecological, and hence the name of the exhibit as Fluid Ecol­ogies. They are ecological in very creative ways. They reference the slave trade, they ref­erence the need for balance, environmentally and politically. They represent the many ways of seeing reality that have been a part of Lat­in-American history.”

As mentioned earlier, Paravisini-Gebert is creating a website for the future exhibit and it should be up before the end of October Break that will enrich those who wish to learn more about Latin American art and remain as a place for visitors to share their reactions to the art to further help understand these works and their impact. The website will include paintings from the exhibit with information and exist after it has closed to allow for people to still discover the importance that diversity has in art.

In talking about the long-term goal of this project, Paravisini-Gebert explained, “The idea is a little bit to test diversity and expand diversity in the gallery, try to provide a link through the work to the local community with a website that invites the community to come in and see the pieces and also to highlight the fact that Vassar does have in its collection a number of significant Latin American artists represented. It would be very nice to pull them out, dust them off a little bit, and let the world see them, because there are some really nice pieces.”