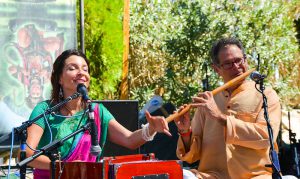 “Bhakti” translates from many Indian lan­guages to “devotion” but the term en­compasses much more in these cultures than its English translation does. Associate Profes­sor of Religion, E. H Rick Jarow, explained, “Bhakti is the tradition of singing songs of love to God. It’s been a major part of Indian spiritu­ality and religion from the seventh century on.”

Indian Devotional Music has no fixed form but is usually lyrical and expresses a love for the Divine. According to Jarow, bhakti is about much more than music. “Bhakti is not always singing and listening in India. It is kind of like a carnival–there a lot of participation. A lot of active listening and engagement with the mu­sic,” he explained.

Jarow organized Vassar’s upcoming Bhak­tifest, which takes place this Tuesday at 7:30 in the Villard Room. For the event, he organized for well-renowned chanter and vocalist Gina Salá to perform alongside Grammy-winning artist Steve Gorn. Gorn will play the Indian bansuri flute and clarinet. Rob Morrison will also be on tablas.

“Gina is very highly regarded,” explained Jarow. “She has sang in a number of languag­es and performed on many different instru­ments.” Born in Seattle, Salá has since per­formed at the Pentagon, the US Capital and the United Nations. She is the principal singer for Cirque du Soleil’s “O.” Her work emphasiz­es creativity, happiness and a strong sense of the self and Divine.

Jarow discovered that Salá would already be in the area performing and quickly tried to bring her to Vassar. “Steve told me that Gina was going to be on the East Coast around this time so the event was kind of born around that,” he explained.

The Asian Studies Program sponsors the event, with support from the Office of the Dean of the Faculty and the Carolyn Grant ’36 Endowment Fund.

According to Jarow, “We have done a couple of events like this before. Every 3 or 4 years we try to bring someone special to campus. In the past, we’ve had a famous yoga instructor and a Classical Indian dancer come. The event usually corresponds with Gandhi’s birthday.”

The Western world has paid increasing attention to Bhakti in recent years. Jarow ex­plained, “It has really been integrated into the Western world recently. Lots of Bhakti Yoga centers are opening. The Omega Institute is doing a program on it. There is a big yoga, mu­sic and dance festival on the West Coast every year.”

This increasing presence in the Western world fills a void. Jarow continued, “It’s kind of become a form that we didn’t already have here–a fusion of community, art, music, fun and spirituality.”

Jarow hopes the department’s events con­tinue to expose people at Vassar and in the community to new cultures. “A lot of peo­ple from outside of Asian Studies come and a lot of people in the community too. I hope it exposes them to an authentic practice, how amazing these can be,” he explained.

Jarow’s experience with this culture started when he was a teenager. He dropped out of Harvard and moved to India, where he learned about many of these traditions. But he came back to the U.S. and eventually to Vassar to learn even more.

“I was interested in Paul Young’s advice: to integrate and learn your own culture before you learn others. So I went back to college and in my studies, I tried to combine Eastern and Western thought as much as possible.”

Events like Bhaktifest help make some of these lessons Jarow has gathered in his trav­els more accessible. Art especially provides a nice medium for students to explore new cul­tures and ideas.

Vasundhara Mathur ’18 noted the impor­tance of having these kinds of artistic-themed international events on campus. She explained, “I definitely believe in the importance of en­gaging in music and art from around the world because even though politics pervades art, the act of making music is universal and has the power to evoke emotions that transcend the complications of intercultural interactions. It can connect people on a very real level.“

Mathur continued, “It also has the ability to communicate the essence of a culture that is often lost in translation. As someone who thinks of music as an important part of her life, listening to artists from different plac­es has opened my mind to new ways of ap­proaching and feeling about music.”

Much of Salá’s work is dedicated to this kind of discovery–both of the self and of one’s greater culture and community. Her online biography reads, “She continues to grow and deepen and study in the field of sound and wellness and sacred sound, even as she leads retreats, chanting and workshops internation­ally. Singing is Gina Salá’s path to opening the heart, which brings freedom and ease and joy. Her passion is empowering us to recognize our magnificence through our own voices, and singing us into remembrance of Who we are.”

Post-Baccalaureate Fellow for the Office of International Services, Robyn Cox ’15, noted the office’s focus on sharing students’ unique cultures. “As far as importance…a celebration of cultures, we invite students to share a tal­ent, cook a dessert for the International Des­sert Cook-off, and most importantly, in my opinion, to present the flag of and a fact about their country,” she explained.