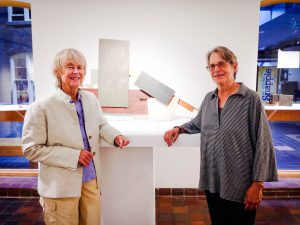 For the next two weeks, the Palmer Gallery will be occupied with objects such as a min­iature of wooden stairs bounded on both sides by a thick wall, a piece of sketch paper attached to a wooden block of the same color or some metal grid screens glued onto a rough piece of paper. These works belong to two artists, So­phia Healy, from White Creek, N.Y. and Andrea Woodner, based in Manhattan, in their first collaborative exhibition, “In Conversation”, at Vassar’s James W. Palmer Gallery.

The initiative was brought up by the Associ­ate Director of the gallery, Monica Church, who used to work with Healy as a studio assistant. She describes this collaborative exhibition as a discovery. It all started with Church’s visit to Healy’s studio in White Creek.

“I went in, and there were all these small pieces tacked up on the wall and I thought it was really beautiful. Then she said, ‘Do you want to see my friend Andrea’s storage space?’ When I saw Andrea’s sculptures, I said, ‘You guys need to show this work together,’” Church noted.

The opening reception for “In Conversation” took place on Sept. 24, 2015, with the presence of the two artists, guests and Vassar students. Sharing her reasons for using wood as a me­dium, Woodner noted, “Wood is at hand and there’s a lot you can do with it. I love the forgiv­ing nature of wood and the fact that it has real character and it can be practically anything you want it to be.”

Sharing about her working style, Woodner said, “I try to make a spatial presence, a physi­cal presence that’s a new thing in the world. It’s more of an inquiry and an investigation than it is a recollection. I’m really looking at the material at hand to make something new in the world.”

Different from Woodner, Healy did not start with wood. “Originally, I came from paper. I make handmade paper for cotton and linen rags. I started collecting pieces of wood for Andrea to make sculptures, and then I thought, ‘Why don’t I make some too?’” Healy also credited her partner: “I would never have done all these wooden pieces if it hadn’t been that I saw hers. She inspired me to do pieces of wood.”

Talking about the differences between her style and Woodner’s, Healy noted, “I work to­tally by chance. I throw some pieces of paper on and go, ‘Oh that could look good together,’ or pile up stuffs and go, ‘Wait a minute that would look good.’ I don’t really have any emotional at­tachment to the work in the beginning, but later I’ll think, ‘Oh this can be named such and such,’ and it brings up some memory.”

Although Healy and Woodner have been looking at and discussing art together, they have never put their works together on dis­play. Commenting on this collaborative aspect of this exhibition, Woodner said, “They’re just so at home with each other. We could be doing very different works, but the fact that it comes from both of our brains just makes it completely compatible in a very different way. So I’m very happy to see the work combined.”

A visitor at the opening reception and full-time artist herself who has taught at the Univer­sity of South Carolina and Rochester Institute of Technology, Judith Ellers commented on the exhibition, “The minimal quality of it begs a lot of questions. Certainly, I can see a Southwest in­fluence in the work. I enjoy the works that are quite simple in nature. Her choices of color are subdued, and I also enjoy the dichotomy. I like squares, and to put the two squares together and have it talk to one another is an interesting idea to me.”

Church also noticed the subtlety of the works’ colors. She noted, “I love her color pal­ette. I love these greys. This is a show where you come in and it looks like there isn’t any col­or, but there’s this very narrow beautiful color range here that’s very rich. Especially looking at the show we had here before, the Eric Brown’s, which was a lot of bright color, very geometric patterning, this is like at the opposite end of the spectrum.”

When asked to give opinions on her partner’s work, Woodner said, “I think she’s an incredi­bly original artist. I don’t think at first blush you see, because I think she doesn’t work in the most ‘innovative’ materials, but her conception of art is highly original and almost progressive. She doesn’t ever look back, she keeps moving forward and she keeps trying things that no­body else would try and makes statements that nobody else would make. I think of myself more as a sculptor and I think of Sophia more as an artist.”

A student visitor at the opening reception, Nnennia Mazagwu ’17 noted, “I enjoy this art­work, because it makes me feel like maybe I can have a gallery opening or create something like this. I just appreciate art I can access.” Mazagwu went on, “I wish there was some type of story that tied it all together, something to explain. Even the exhibit, they just have numbers, noth­ing to explain.”

Responding to Mazagwu’s question, Church said, “If we had the labels up visually, they would compete with the artwork. We worked with a graphic designer who helped us get just the right grey. If you notice, the numbers are grey, they’re not black, because if they were black, they’d be popping off the wall. We were really aware of the fact that we wanted them to be present because when you walk into the show and look for the numbers, we want them to be subtle so that visitors will learn to start thinking visually.”

Healy also shared, “We want the sculptures to talk, and we don’t want too much thinking for the viewers. We want them to just look.”