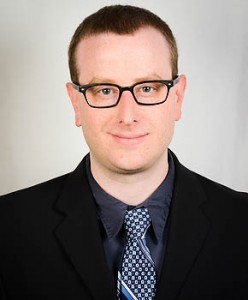 Courtesy of The Catholic University of America

The digitization of sound sounds more like a futuristic process than it does a part of our country’s historical narrative. But recent movements in academia are trying to change that, to reexamine and strengthen the historical value of sound that is often dissipated in the culture of fast-paced, forward-thinking minds of the 21st century.

The Creative Arts Across Discipline’s (CAAD) Grant will bring Josh Shepperd to lec­ture about these often overlooked yet critical topics of sound preservation and digital human­ities.

Shepperd wrote, “I’ll be visiting Vassar to talk about three research topics. The first is my book project on the origins of public broadcasting in the U.S. Surprisingly, to this point no one has ever written a history of where noncommercial media came from! It turns out that NPR and PBS are later products of political advocacy conduct­ed by educational technologists in the 1930s and 1940s.”

Shepperd continued, “The second topic will be phenomenology of media, especially regard­ing the question what is media space? It’s an often cited but rarely interrogated conceptual question in the field of Film and Media Studies. I argue that we need to return to the concept of spatiality as an epistemological category…to ful­ly understand what we’re describing when we use common terms like blog space.”

Shepperd’s discussion, however, will mostly revolve around his last point–the current work he is doing in sound preservation. “Finally, I’ll be giving a public lecture on the digital humanities work I’ve been conducting as National Research Director of the Radio Preservation Task Force of the Library of Congress. We’re attempting to chronicle extant materials related to broadcast­ing history for the first time through a metadata interface. From there we hope to embark on a rigorous historical digitization initiative that will preserve tens of thousands of hours of in­terviews, public forums, news events, and sports broadcasts for historical study. If we approach radio not just as an early form of television, but as the sound of U.S. cultural history, we find that many groups not accounted for by historical ar­chives are given their due thanks to radio’s his­torical capacity to air local non-theatrical com­munity events,” concluded Shepperd.

Professor of Film, Phillip Scepanski said, “So there’s this big effort right now in the academy, and the Library of Congress is part of this: to try to take note of and preserve the audio history of the United States in 20th century. So part of what I’m doing in the radio class is sort of tapping into these archives that are available online to explore them…Usually archives are ei­ther working towards archiving and preserving things, or they tend to focus more on accessibil­ity and education. [Shepperd is] trying to make sure they do both. I think that’s part of the rea­son why [the Library of Congress] has an actual professor instead of, not to downplay anyone, someone who works in library sciences.”

One of Scepanski’s students in his class, Louis Khourey ’16, noted the importance of having this material available for students and researchers. “It can be [really frustrating] for researchers to look at sound archives and discover so many missing links. Especially when vinyl was more or less the only way of preserving something, loads of iconic radio programs are only able to be discussed by memory where the recordings have been lost or broken.”

Though Scepanski and Shepperd have not yet crossed paths, Scepanski finds his work with topics like audio preservation and radio histo­ry important. When asked about his personal thoughts regarding Shepperd’s lecture, Scep­anski responded, “I think it’s really interesting. I mean it’s really great that we’ve been able to get the CAAD grant to be able to bring him.”

As specific as the subject matter may be, au­dio preservation and radio history seems to be a source of solidarity within the expanding field of media studies. Scepanski said, “We have an­other guest coming in a week before Thanksgiv­ing, who’s going to be talking about podcasting and digital audio business[,] [specifically] Ear­wolf Podcast. He also has a lot of history with independent and community radio, which is an interest of mine. It was sort of by accident that we discovered that we both worked at the same radio station, albeit at very different times. So we didn’t actually cross over, but I sort of dis­covered by knowing who he is and what he does that we were at the same radio station at one point.”

Another lecturer on the topic will come to campus before Thanksgiving. Scepanski said, “[The second guest] is a student of a professor that we had visited last year. Michelle Hilmes, who almost started the field of radio studies, was his advisor when he was at the University of Wisconsin–Madison. It’s kind of interesting that now we’re building up a series of guest who all come from the same world of audio preserva­tion and radio history. It’s really exciting.”

Regarding the significance of the topic and its potential for use by students, Shepperd said, “In terms of the national project, all of our par­ticipants (over 120 professors and 350 archives) hope that students of American history begin to take radio seriously as a major repository of 20th century experiences and events. Our national radio archive is an untapped treasure trove of music, ideas, and opinions, and thanks to new innovations in digital technology we’re just starting to be able to access and circulate this material. It’s also important to remember that historical preservation is not simply a ques­tion of accumulating material and transferring it into a digital format. There are multiple regu­latory and copyright expediencies that precede the preservation and circulation of information, which I’ll address in the lecture. Developing conditions of historical recognition for other­wise marginalized groups is in itself a political advocacy, one that requires familiarity regard­ing appropriate gatekeeping institutions and policies.”