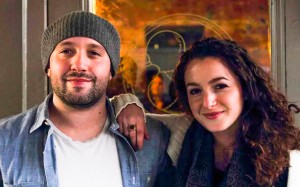 Very rarely do we hear the account of a suc­cessful, apron-wearing entrepreneur. A few weeks ago, the New York Times published a food section, as they do every Wednesday, that included a feature about a brother and sis­ter team who opened two New York City food spots in the past couple of years. As it turned out, one half of the duo, Julie Horowitz, was a member of the Vassar graduating class of ‘08.

She and her brother, Will Horowitz, only recently opened Ducks Eatery and Harry and Ida’s in NYC.

Ducks Eatery, on East 12th Street between 1st and 2nd Ave, opened three and a half years ago. She said, “In its original state, Ducks was a grilled cheese and tomato soup concept. My brother was living in Colorado at the time and wanted to open little Duck huts along the ski mountains. When he moved back home, it changed to a late night grilled cheese concept intended for the bar scene in White Plains, NY where we grew up.”

Their journey took them to SPiN New York, a table tennis nightclub in NYC’s Flatiron dis­trict. Horowitz added, “It took us a few years at that location to really begin evolving Ducks into what it is now, which is still hard to catego­rize into a specific genre of food, but definitely reflects us and our backgrounds more than it ever did.”

While she was at Vassar, being in the food business wasn’t on Horowitz’s agenda. She said, “I started off as a Psychology major but switched to French while JYA in Paris”. Before she joined her brother to open Ducks, Horow­itz was teaching English in Réunion, a French island near Madagascar.

If she hadn’t joined her brother in opening their food spots, Horowitz said, “I imagine it going in two very different directions. Either still living the expat beach life while teaching in Réunion or potentially working in the maga­zine/editing industry. I worked at House Beau­tiful for a summer in college and really loved the artistic direction of it. Whenever I get to use the skills that I learned there, during food photoshoots, branding, it still really hits home for me.”

In addition to Ducks Eatery, Julie and Will also run a delicatessen called Harry and Ida’s. Horowitz commented, “While Ducks is defi­nitely our home base, it’s a very tiny space with limited room for expansion and research. We had been running our pastrami sandwich as a late night special at Ducks and at fairs and fes­tivals, but it never really had a home and didn’t quite fit in with our menu.”

Harry and Ida’s is actually named after the Horowitz’s great-grandparents who owned a deli in Harlem.

Horowitz clarified, “Harry and Ida Zinn were my great-grandparents on my dad’s side. They were immigrants to the U.S. from Hun­gary and opened their Kosher delicatessen in Harlem in the early 1900s.”

The Horowitz’s have taken a lot of inspira­tion from this business their great-grandpar­ents ran. Horowitz went on to say, “According to our grandmother, who passed away at 99 last year, their deli was really known for their pick­led beef tongue and potato salad which she re­membered making and eating a lot of as a child. They also had this great pastrami recipe, which is the basis of the one we use today at the shop. Oddly enough, I resemble Harry and my broth­er looks exactly like Ida.”

While pickled beef tongue might sound a little eccentric, it might not be compared to some of the provisions sold at Harry and Ida’s. Horowitz added, “The inspiration from the in­gredients is constantly evolving. Initially, much of the inspiration came from mine and Will’s travels as well as our childhood.”

Horowitz went on, “We grew up going out to the North Fork of Long Island where our grandparents on my mom’s side still live. Our grandfather was a big fisherman and was bring­ing home fresh clams, mussels, and bluefish, which my grandmother, a classically trained chef, would cook up, always with a side of her fresh sourdough bread.”

Horowitz explained that many of their reci­pes are merely variations of traditional recipes. She said, “A lot of the ingredients that we play around with at the store are ones that we grew up with out there, especially all of the seafood, the cattails, different salts and seaweeds. Much of the store’s contents really come from that part of the state.”

The other ingredients that they use, Horow­itz explained, came later. “Ingredients like eels, frog legs and crazy mushrooms came later, usually from big foraging adventures which my brother gets to do a lot of,” She said. “Our dy­namic usually involves him thinking up some crazy concoction and me making it accessible enough for public consumption.”

The adventure for the Horowitz siblings doesn’t end with Ducks Eatery or Harry and Ida’s. Horowitz added, “Our immediate plan is to open more satellite locations of Harry and Ida’s around the city in the next year. We are also starting to package some of our menu items like our brisket jerky and ‘Deez Nuts’ (named pre-politician).”

Horowitz keeps her plate full. “When I’m not at either place, I also run a small cake busi­ness on the side (Shweetums),” She said. “It’s something I’ve always loved doing and in the past few years have really gotten the chance to experiment, learn new techniques, and build a customer base. Whenever I’m making cakes that involve fondant, I always think back to my days in the Vassar Costume shop with Hol­ly Hummel and Arden Kirkland. It’s amazing how often I utilize what I learned from them in drafting and draping, but now with sugar dough instead of fabric.”

Running two storefront businesses and an online one on the side doesn’t keep Horowitz busy enough. She said, “My brother is also in the process of writing a cookbook called ‘Salt, Smoke, and Time’ with Harper Collins, for which I’m painting/drawing all of the illustra­tions.”

If you get the chance to visit Ducks Eatery or Harry and Ida’s, be sure to take Julie’s rec­ommendations into mind. She concluded, “My all time favorite dish at Ducks is the smoked mussels. We serve it in a tin (Spanish conser­va-style) with chili oil, cured meyer lemon, maple and house-cultured smoked butter on toast. I could eat it every meal, everyday… and sometimes do. As incredible as the pastrami is over at Harry and Ida’s, my favorite thing is actually the small jar of conserved cockles we make with homemade smoked thyme oil and sprinkled with a little chive salt.”