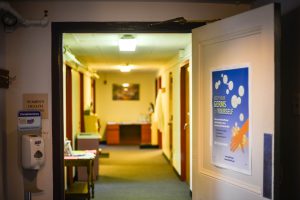 The atmosphere in the Jade Parlor was less awkward and more expectant before the start of the Birth Control Q&A discussion on Tuesday. Students weren’t there to judge or poke fun, rather, they hoped to fill in the gaps in their knowledge of safe sex.

“One of the largest questions we try to ad­dress during this discussion is how students can go about accessing different forms of birth control (whether that be on or off-campus),” outreach chair for CHOICE and the wellness peer educator for the office of Health Educa­tion, Natalie Kopke said.

“The Office of Health Education has held multiple versions of this event throughout the years. It’s usually a small, discussion-based event (with an attendance of roughly 20 or so students) headed by birth control specialists,” She went on to say. “Through our discussion, we hope to help students figure what form of birth control is right for them. Ultimately, we hope that this will be starting point for further campus discussion as well as means of provid­ing transparency as to how to go about access­ing sexual health resources on and off-cam­pus.”

The office of Health Education along with CHOICE collaborated and hosted this year’s discussion in the Jade Parlor on Tuesday, Sept. 29.

The session was led by Nurse Practitioner and Nursing Supervisor Anne Dadarria and health educator from Planned Parenthood in the Mid-Hudson Valley, Judy Di Matteo. “This session gives students an intimate setting to learn and ask questions about something that will affect them for most of their reproductive lives,” Dadarria explained.

There are many misconceptions about birth control that Dadarria hoped to dispel. “Many people think that because they have birth con­trol they don’t need basic gynecological care anymore,” Dadarria said. “However, contrary to popular belief, these check ups must be done at least once a year along with tests to check for STD’s.”

Di Matteo and Dadarria began the discus­sion with the different types of hormonal birth control. Both women kept the tone light, and made sure students knew they were free to interrupt with any doubts and queries. When the discussion moved on to birth control in­struments, they even passed were passed each contraceptive around the room for students to observe.

There are different forms of IUD, including a copper IUD that creates a hostile environ­ment for sperm and Mirena, which can com­pletely stop blood flow and can last up to five years.

IUD’s do not require surgery, and there is no incision made,” Dadarria said. “It is a pro­cedure that can be done by many clinicians at Planned Parenthood. Once it is put in, it does not get expelled easily.”

As for emergency contraception, the copper IUD and different types of pills can be used in case of emergencies. Pills such as ‘Plan B’ and ‘Next Choice’ are easily available but ‘Ella’ is a little harder to procure and more expen­sive. These are all good options in emergency situations, but have side effects if used for too long. “I don’t recommend taking these pills on a regular basis as they can cause nausea and irregular menstrual cycles,” Dadarria said.

Daily birth control pills are another pill that come with a warning. You must take them at the same time every day for them to be effec­tive. They also help with heavy blood flow, anemia, endometriosis, acne and can even re­duce chances of ovarian and colon cancer.

Something that not many people had heard of, Depo-Provera, is a birth control shot. It is taken every 3 months, but it is less popular due to its extensive side effects: mood changes, thinner bones, weight gain and acne. It also stops the menstrual flow after a point.

The session concluded with some facts about condoms. “Just because someone is on birth control doesn’t mean condoms aren’t im­portant. They are still the only form of protec­tion against STD’s,” Dadarria said. “The female condom has a lower effectiveness but is made out of plastic, not latex and is a better option for people allergic to latex,” She added.

The session was informative and extremely helpful for students. One attendee, Robin Cor­loto ’19 said, “I liked how the session touched base with protection for people of all genders.”

Living with healthy sex habits is just an­other aspect of college. “Navigating a college environment, for most students, is difficult enough. Add to that the pressures of navigating a safe and healthy sex life and it can become rather… overwhelming,” Kopke said. “Through this event, the Office of Health Education and CHOICE hopes to give to the Vassar commu­nity the tools (and information) necessary to make positive sexual health choices.”

The event Tuesday created a safe atmo­sphere for students to learn more about what they wanted to know on the topic of safe sex. It created the bridge for those who feared speak­ing up about the topic.