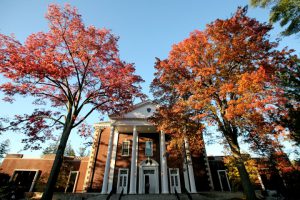 Ken Oldehoff stuck his head in the door.

“Sorry, I was just on the phone with somebody from the Local Economy Project, the Hudson Val­ley Farm food hub, or farm hub, asking me what Vassar would buy next fall because they’re planning what to plant.”

As the Director of Marketing and Sustainability, Oldehoff finds and brings more local food to campus. The Deece that “popped-up” under the tent outside the College Center a few weeks ago, and has also been under the tent on the big side of the Deece occasionally, is a showcase not just of the local foods that Ol­dehoff has found, but also a tribute to the talented chefs on Vassar’s campus.

Senior Director of Campus Din­ing Maureen King explained, “I think we’ve been talking about it for awhile. I mean, we’ve been do­ing the pop-ups in the Deece.”

The move to push the pop-up tent outside was Oldehoff’s idea. King said, gesturing from inside her office behind the Kiosk, “Ken had had this idea last year to do a pop-up somewhere in this area, where students could use a meal.”

She went on, “We’ve done bigger events in the dining rooms, and that was just an idea to create some va­riety for students, just to do some­thing different. Eating in the same place every day can get monoto­nous for students.”

The pop-up Deece provided a way for students and chefs alike to take a break from their usual proceedings. King said, “It’s a way to showcase some of the talent we have on campus. For example, There was the pop-up tent inside last night, next week we have our bakers, they’re going to be doing a special dessert, and we’ve showcased local pro­duce from the Poughkeepsie Farm Project.”

While the idea for the pop-up Deece isn’t a new one, moving it outside was a novelty. “It’s a little more labor intensive, moving it outside, because when you do it in the Deece, every­thing is right there. We just put up a little tent right over the station,” King said. She added, “But to do it outside, you have to move every­thing outside. You have to get the tables out­side. For that one, you needed grills, which we don’t actually have on site.”

Oldehoff added, “We happened to have the grills from the Labor Day BBQ , we said ‘okay, we can use those.’”

Figuring out what to serve was easier than the manual labor. Oldehoff said, “The menu was me talking to the chefs saying, ‘I just want to try this, let’s come up with something simple since it’s the first time.’” The food, grilled chicken and vegetables, of course, were local. Oldehoff went on, “It was kind of very very simple. But Bruce Harms, the chef in the Retreat, saw a dressing in the New York Times and said ‘well, why don’t we do it with this?’ And it was like, ‘yeah, sure, why not?’”

In addition to the BBQ chicken, Oldehoff and King said that being able to provide the vegan option was important. “When we initially talk­ed about the menu for this we made sure that we had a vegan option available,” King said. “I don’t know that that was initially on our plate, but we really needed to make sure that we had a vegan option.” That ended up being the egg­plant stacks. Oldehoff wanted to make sure that they could show off their seasonal foods. “There’s just so many options,” He said.

Because the event fell the same day as Con­vocation, King wasn’t sure how the turnout would look. Jennifer Williams ’18, who works as a catering waitstaffer and also worked at the first outdoors pop-up Deece, wrote in an emailed statement, “The pop-up event outside of the Retreat was not as popular as I thought it might be. However, that may be because of advertising.”

For that reason, Oldehoff said, they limited the outside pop-up Deece to serve only about 200 portions. “We tried to make it clear to ev­erybody, since we didn’t know how it would go,” He said. As for the experience of those working the event, Williams said, “It was defi­nitely a different atmosphere working outside as compared to inside. It was actually more fun to work because while we were waiting for peo­ple to serve, my amazing coworker and I just danced and sang to music with the adult em­ployees.”

Pop-ups inside the Deece are not much dif­ferent. Showcasing local food is always the pri­ority. “The pop-up events inside the deece are always very popular; we always run out of the food before the end,” Williams said.

Moving a bit of the Deece outside was sim­ply something new that Campus Dining wanted to try. “This was just an idea we had,” King ex­plained. “We just wanted to see if students liked it, there was nothing else to it.”

Oldehoff added, “It just seemed like a good idea. We’re lucky to have a number of people in the department who work really hard. It’s not easy to feed as many people as you are. But they’re willing to say ‘yeah, that sounds like fun. Let’s try it!’ And that’s what we do, we say ‘yeah! Let’s try it!’”

As for the outside pop-up Deece trying to draw attention away from the Deece not using enough local food, King said, “It’s hard to dispel the thoughts and rumors that we use all pro­cessed foods.”

At the recent food presentations from differ­ent vendors, Oldehoff said that what he’s heard from students has been discouraging. “Some of the infrastructure in the Hudson Valley that grow local foods is a direct result of the sup­port that Campus Dining at Vassar has done,” He said. “It’s a fact that we have supported peo­ple who, otherwise, their business would have starved. So sometimes it’s really discouraging, for me it’s really discouraging, to hear people say ‘we’re not doing anything with local foods,’” Oldehoff went on.

“That’s another misconception, that things that come from Aramark are packaged and fro­zen, and the guys just heat it up, and that’s just really not true,” King added. Oldehoff said, “I think a lot of public schools now prepare stuff in a local kitchen and then ship it out to all of the schools. So when people come to college their freshman year they think, ‘oh, they proba­bly made it from the same way they made it in the public school that I went to.’”

Vassar’s food comes from many local provid­ers, including Red barn, the Poughkeepsie Farm Project and other nearby orchards. Oldehoff said, “Vassar has been a leader when it comes to using local foods, on the east coast, I can’t say anything about the west coast.”

He went on, “It’s much easier to have local foods when half the country eats food from Cal­ifornia.” In fact, King said, “We have 24% local foods.”

“We try to mix things up. We’ll probably have this BBQ parfait. We’ll have to have a vegetarian option, too. I’m not sure what we’ll have. A cup of mashed potatoes for a meal swipe might be a little tough,” Oldehoff said. “We’re here to try new things. I don’t know what else to tell you.”