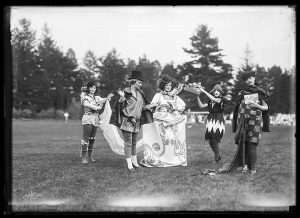 In an image from nearly a century ago, taken in May 1930, the class of 1932 gathers on the lawn near Main Building for their tree ceremony. Dressed in white robes, hoods and some with fake white beards on, the large group of students are holding a flag emblazoned with their class year. Some students stand around the small sapling they just planted as their class tree.

Although class trees and the events around them don’t h

ave much presence on campus now, it was a big deal 85 years ago, involv­ing dove-releasing, secret rites and digging the hole using Matthew Vas­sar’s silver spade. The tree ceremo­nies were documented by a series of images dating from 1904 to 1935.

This series of visual materials can be found in the “Glass Plates Neg­atives” collection at Vassar’s digital library. With 870 images in total, the collection was recently conserved and digitized at an off-campus con­servation center. The images were

processed from corresponding glass plate negatives, which was a common way of pre­serving images in the last century.

The story behind these images can be as refreshing as the stories they depict.

Although the images just became avail­able, the glass plate negatives they were made from have been in the stacks of the Archives and Special Collections Library for decades. A College Archivist working in the Special Collections, Laura Streett says that the plate negatives have been there for as long as she could remember. “I’ve been here for 11 years and my boss has been here for 16, so it’s possible that they were wrapped in bubble wraps and cardboards when this wing of the library was added.”

Special Collections has been making an ongoing effort to digitize Vassar-related documents. So earlier this year, the first 100 packages of the plate negatives were sent out to the Northeast Document Conservation Center (NEDCC), a non-profit conservation center specializing in the preservation of library and archival materials in Massachu­setts. There, the packages were opened; the plates were cleaned and re-housed; and im­ages were made from them.

According to the Senior Photograph Con­servator at NEDCC, Monique Fischer, the first step was to unwrap the packages. She wrote in an emailed statement: “The glass plate negatives arrived housed in acidic cor­rugated board and wrapped in bubble wrap. Tape was used to hold the package together… the first part of the procedure was to unwrap the packages and inspect the glass plate negatives. Many were in stable condition. However, a few were broken with missing pieces.”

The imaging procedure consisted of photographing the negatives and electroni­cally reversing the negative color. Director of Imaging Services at NEDCC, Terrance D’Ambrosio elaborated on how to photo­graph translucent materials such as a glass plate. According to him, they would employ a copy stand, which has an arm that holds the camera facing down and parallel to the table surface. For transparent materials, the copy stand’s table has a window cut out of the center with a piece of glass inset. And below it there’s a flashlight.

He wrote in an emailed statement, “So the idea is that we set up the glass plate over the window, and then when we release the shut­ter, it triggers the strobe, the strobe releas­es a burst of light, and we capture the glass plate in a single, quick shot, just as the light passes through the glass.”

With photo captures taken, D’Ambrosio and his colleagues then proceeded to invert the negative images into positive ones. Al­though traditionally carried out in a dark room, this process is done electronically. “With the digital file, we do the same thing, essentially, but with the capture and editing software we use. So for each individual dig­ital image, the photographer made manual adjustments to the levels–brightness, con­trast, etc.–to make sure that they all looked their best,” explained D’Ambrosio.

After imaging and digitization, each indi­vidual plate negatives was re-housed in four-flap enclosures and placed in flip-top boxes. Fischer explained the special criterion of these packing materials.

“All housing materials used have passed the Photograph Activity Test (PAT), which is an international standard test for evaluat­ing photo-storage and display products. The tests evaluates possible chemical interac­tions between enclosures and photographic images after long-term storage,” she wrote.

Recounting their experiences working with these glass plate negatives, both D’Am­brosio and Fischer agreed that their handling was the hardest part. “In part it’s that they’re heavy and require very gentle handling, but there’s also the background knowledge that this is a totally unique but incredibly fragile object, and one misstep on your part could destroy it,” wrote D’Ambrosio.

At Vassar, Digital Initiatives Librarian, Joanna DiPasquale was responsible for cate­gorizing and posting them online. She wrote in an emailed statement, “Once the digital materials were sent to us, my department worked with our College Archivist to collect as much metadata as possible (description, what images belonged with others, etc.), and placed the materials into our digital repos­itory…We had very basic information. Our college archivist did an amazing job fleshing out this information so that the items were better organized and searchable.”

One aspect of this information is the pho­tographer’s name: Edward L. Wolven. A con­tract photographer of the college during the period, Wolven took most of the recovered images. Streett shared further information about this Poughkeepsie photographer. “We know he was active at Vassar from the turn of 20th century into the 1930s. He was con­tracted out, and hired as an official photog­rapher to take athlete team photos, or to re­cord dramatic events such as the Field Day. His name is all over our prints, and also in scrapbooks, since he would offer images for sale and students would buy them and add them to their scrapbooks.”

To improve the understanding of Vassar’s history and to better facilitate students and faculty members with their research, Special Collections started a consistent endeavor to conserve and digitize materials related to the College a few years ago. Untill today, many films and recordings have been digi­tized, as well as every issue of Miscellany News untill 2011, with more recent issues to follow. The Vassar Quarterly will be posted online soon, too.

Streett conclude, “It requires a substantial amount of money to carry out this project, and we are always looking for interested par­ties to help with it. We rely on the help, kind­ness and generosity of people.”