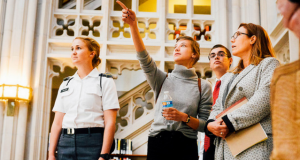 Although they are in such close proximity, the schools in the Hudson Valley area don’t often come together to share their ideas. “I think it’s really sweet watching all these schools come together to talk about philosophy and engag­ing in philosophical discussions,” Erin Leahy ’16, a member of the Philosophy department’s majors committee said of the second an­nual Mid-Hudson Philosophy So­ciety meeting. She added, “Having a central event or location to come do philosophy together is really special; and to have a whole day with events that are interrelated to give a broader context of a certain philosophical issue is also really valuable.”

You didn’t have to be the next Aristotle or Socrates to attend and enjoy this event. All that was required was a curiosity about society and a willingness to learn. Lea­hy said, “Quite simply, I hoped to learn more about a certain philosophical subject. I really enjoy Philosophy and this is me just learning some philosophy that’s not in a class environ­ment.”

The Mid-Hudson Philosophy Society’s sec­ond annual meeting that took place on Satur­day, Sept. 26 in Rocky was filled with future majors, introspective, prospective and current Philosophy students, and students with an in­satiable desire to gain a more profound under­standing of contemporary issues. It provided students and faculty with a space to learn from and converse with like-minded thinkers about the morals of torture and its place in history and society.

The Mid-Hudson Philosophy Society is a philosophical alliance that consists of five schools that surround the nearby Hudson Riv­er. Students and faculty from Bard College, Marist College, the State University of New York at New Paltz, the United States Military Academy at West Point and Vassar College meet annually to combine their knowledge and different perspectives to discuss one phil­osophical topic. The previous one took place at West Point last year.

The conference attracted approximately 80 students and faculty from across the five colleges. It featured a lecture by distinguished professor of Philosophy at The New School for Social Research, Jay M. Bernstein.

Bernstein’s presentation was based off his last book, “Torture and Dignity: An Essay on Moral Injury”, and was titled “Torture and the Rule of Law.”

Bernstein’s lecture focused on the initial foundations for modern moral law against the use of cruelty and torture—a pressing issue in the contemporary world today. Professor of Philosophy and Chair of the Philosophy de­partment, Giovanna Borradori, explained that Bernstein’s discussion of this topic comes at an appropriate time. “This issue is at the cen­ter of contemporary debates about the bru­tality of the industrial prison complex in the US. You can imagine how delicate a point this was for both the West Point cadet and Pro­fessor Bernstein, who at this conference had a unique chance to speak openly and deeply about a topic of urgent political concern for everyone.”

Philosophy professor, Travis Holloway, said that the lecture contained many aspects that related to current issues. He stated, “The talk itself was a response to the ongoing crisis of Guantanamo Bay. The fact that even though we have national human rights and interna­tional humans right, we still treat certain peo­ple as exceptions to these rights.”

He went on, “We have to return back to the basic principles of modern and moral law to understand that they were intended to apply to all people, based on the idea that we are all equal and born equal.”

Leahy agreed. She said that, while this coun­try may believe that torture is in the past, it is still very-much present. “Torture, for that mo­ment, was seen as a thing of the past. Now, a lot of people do still use torture, and our own country does still use torturem,” She shared. She added, “I think his [Bernstein] thesis is basically that torture is logically unsound with our current government system, our cur­rent justice system. It logically does not make sense. And that was really interesting.”

The Mid-Hudson Philosophy Society’s con­ference allowed students to think critically about a current controversy in a controlled environment of like-minded and curious thinkers from five schools. The students and faculty brought with them their own diverse perspectives and background knowledge, en­hancing the existing ideas of those around them.

Borradori, cited one captivating instance during the lecture. Borradori said, “One key point was when a West Point cadet asked Professor Bernstein whether a line could be drawn between psychological and physical torture.”

Borradori went on, “Professor Bernstein said that a clear boundary between physical and psychological torture could not be drawn, and examined the case of solitary confine­ment. He defined it as one of the most trau­matic examples of torture practiced every day in the United States, a country where torture is suppose to be illegal.”

The event consisted of formal meetings such as a keynote address by Bernstein and a student’s panel. It also comprised of more informal moments, such as lunch in the Aula and a campus tour.

The event was beneficial in helping stu­dents bridge the physical, intellectual and so­cial gap between the five colleges. Borradori said, “In addition to the conference room, these informal moments of sharing encour­aged an emerging sense of community be­tween students and faculty coming from dif­ferent campuses.”

In the Student Panel, Vassar Philosophy ma­jor Arshy Azizi ’16 presented a paper entitled “Tort Law and Corrective Justice.” The paper consisted of philosophical questions concern­ing the distinct responsibilities of law and the role of the jury as a stand in for civil society. The respondents from the other four schools provided a detailed analysis of Azizi’s paper and responded with thoughtful objections.

Borradori believed that the event clearly showcased the epitome of a liberal arts expe­rience. She shared, “All in all, it was an illu­minating session that shows the high degree of sophistication that smart undergraduates at all of these institutions have acquired through their liberal arts education.”

“The strength of the Philosophy Depart­ment at Vassar College is in the pluralism of approaches to philosophy and the breath of philosophical areas that we cover, both in terms of our scholarship and our teaching.” Borradori said.

Borradori went on, “The pluralism that we stand for and practice, day in and day out, was on full display during the student panel seg­ment of the conference. We are proud of the quality of mind that our students showed in the questions that followed the keynote ad­dress and during the Student’s Panel.”

For Leahy, the discussions happening gave her a new perspective on a topic she is very familiar with. She said, “It’s like reading a re­ally cool article that you don’t have to read for class. And you’ll learn something new—some­thing you would not have learned otherwise.”

Access to such events as the Mid-Hudson’s Society Philosophy conference enables stu­dents to broaden their horizons and further enhance their liberal arts education. It allows people to discover something on their own without the hassle, stress and pressure that often accompanies school lectures.

“I strongly believe that the collaboration between students and faculty outside of the classroom setting is an important component of the liberal art education.” Borradori said, “This conference was a unique opportunity for that.”