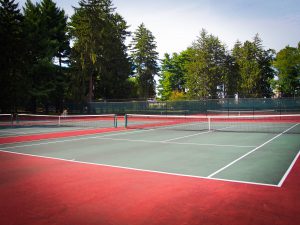 The women’s tennis team at Vassar College has sustained a long running tradition of winning. Head coach Kathy Campbell has been with the team since the late 1970s and boasts an impressive re­sume that has seen the Brewers ranked among the top-15 teams in the Intercollegiate Tennis Associ­ation (ITA) Northeast region since 1988. Her teams have also been na­tionally ranked for 18 years. Vassar won the Liberty League title every year from 2002 to 2010 and has also won the Seven Sisters Champion­ship 11 times since 1987, including victories in 2013 and 2015.

Still, this fall, the team faces a difficult situation. Last year, the roster consisted of 13 players, a good surplus, considering the travel party consists of 10 girls. This sea­son, however, the roster consists of seven athletes. A team needs six athletes to compete in match, mak­ing a roster of seven risky when it comes to competing over the course of an entire season. There are sever­al factors for the drop in numbers, including the graduation of seniors, a lack of freshman recruits and JYA departures. These all have been consistent issues throughout the years.

One additional cause of this year’s low numbers has been the departure of sophomore Lauren DiFazio from the team. DiFazio was notified via a handwritten letter on July 23 this past summer. The letter read: “After much consideration over the summer, I have decided to reduce the size of the team for this coming year. In making the team smaller, I am also making an effort to insure that the team members’ skills throughout the roster are clos­er in ability to push each other more and to raise the overall level of play. Therefore, I am not able to offer you a spot on the team this year.” It went on to explain, “At our May meeting after the season, I did remind you that each year I decide who returns to the team the following year.”

DiFazio acknowledged the gap in skill, yet described her determined mindset going into the summer via interview: “I just wasn’t getting bet­ter… It was kind of like a wash. [I said to myself] I’m going to go home over the summer and work my ass off because I want to play. I don’t want to be on this team if I’m just gonna be benched the whole time. So I go home and I literally played tennis for 6 hours every single day. It was ridiculous. I was running, I was training, I was weightlifting.” DiFazio suggested that had she known about the cut earlier, she

could have done something else with her sum­mer. She explained, “I didn’t do anything, like I should have had a job. I should have been doing something with my life, but instead I was train­ing, cause I really care about tennis. I want to play on this team.”

DiFazio sent Coach Campbell a follow up email on Aug. 3. According to her interview, she did not hear back and left messages on her work and home phones. DiFazio received an email from Coach Campbell on Aug. 10 explaining that the two could find a time to talk in the near fu­ture. After several other emails, DiFazio affirmed that she and Campbell did not speak until Aug. 21. “It was the Friday before I came back here she called me and I was like hey look I’ve been work­ing really hard, I know you don’t know that. Can I just try and walk on? She lets anybody walk on who emails her. She was just like no… This is so ridiculous. I have nothing to do with my two or three extra hours a day except fight her on this.”

That same day, in an emailed statement to Michelle Walsh, the school’s Athletic Director, DiFazio expressed her frustration with Coach Campbell’s decision in the email and requested that she and Walsh meet. According to email transcripts between Walsh and DiFazio, the Athletic Director met with Campbell on Aug. 24. Walsh’s email read, “I had the opportunity to speak with Coach Campbell today and she con­firmed that she would not be offering you a spot on the team this year based on two primary fac­tors: Her intent to have a smaller roster in 2015-16 and her assessment of your tennis skills during the 2014-15 season. Each head coach at Vassar is responsible for determining the players who make the team and the decision of the coach is final.” The email continued that Walsh would be available to speak about the issue when Di­Fazio returned to campus. Still, Walsh stressed, “Please know that it will not change the outcome in regard to your status with the team.” DiFazio added, “No one is giving us a logical explanation. It’s just like, well she wants to make the team smaller. The team is way too small.” The soph­omore also revealed that several of the current players were nursing minor injuries, that, while they could be played through, may become a cause for concern later in the season.

Although she worked hard over the summer to improve her skillset and be an asset to the team, DiFazio did admit to having broken the 48-hour rule last season. The rule, a component of the Alcohol, Tobacco and Drug Policy mandated by the College’s Department of Athletics and Phys­ical Education, mandates that athletes may not use any of the three aforementioned substances 48 hours before athletic competition, while away for athletic contest or during practice. The form states, “The Vassar College Athletics and Physi­cal Education Alcohol, Tobacco and Drug Policy was developed for the health and well-being of all Vassar Student-Athletes and intercollegiate athletics as a whole. A member of any team/pro­gram will be held to a high standard of behavior, as it is a privilege, not a right to participate in in­tercollegiate athletics… However if your coach/ team has a more restrictive policy you must abide by that policy for the duration of your in­volvement.” The form requires a signature from all athletes before the beginning of each season. DiFazio explained that she was suspended from practice, however the situation seemed to have worked itself out. Campbell did not cite this as having anything to do with DiFazio’s removal from the team.

DiFazio commented further about her deci­sion to attend Vassar. While she mentioned that the timing of the letter did not provide her the opportunity to transfer to play somewhere else, this was not what she desired. “When I looked at schools I didn’t pick the school because I loved the tennis program. I picked it because I liked the people and I liked the school. It’s Division III tennis… I’m not gonna transfer for tennis and I don’t want to. I would rather have both here be­cause I think that’s something that’s completely reasonable.”

Discussions between Campbell, Walsh and DiFazio have been ongoing throughout the past several weeks and progress has been made. Di­Fazio commented on these meetings, “It’s tak­ing up a lot of my time having to meet with all these people. Obviously I’m upset about it or I wouldn’t be doing all this.” She did contend, however, that things were improving. On Sept. 18 she stated, “This was the most sympathetic they’ve been. They were like oh we’ll try and find a solution. We’ll talk about it. They seem like maybe they’ll do something.” After reach­ing out to the Dean Begemann last Wednesday, DiFazio seemed confident via an emailed state­ment that the situation would resolve itself soon.

Coach Campbell also offered her thoughts on the situation and the impact that smaller num­bers will have on the team going forward. Put­ting things in perspective, she explained, “Last year was the largest roster size our program has had in a few years. When putting together any team, I always make an effort to insure that the team members’ skills throughout the roster are close in ability to push each other and to raise the overall level of play. It’s not uncommon for our fall roster to be smaller as we typically may have players studying abroad in the fall and re­turning in the spring for our championship sea­son.” Thus numbers are not as important in the fall. According to the Vassar Athletics website, after this weekend’s Intercollegiate Tennis Asso­ciation Northeast Regional Championships this weekend, the team only has two more matches scheduled for the remainder of the semester.

Campbell’s final statement spoke more to the team’s performance in general. She explained, “We have a cohesive, supportive group with a positive team dynamic. The team members and I are very excited to finish this fall season on this high note, and we look forward to contending for a top spot in the league this spring.”