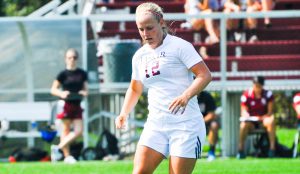 This past weekend, the men’s tennis team hosted the Intercollegiate Tennis Association (ITA) Division III Northeast Regional Men’s Championship, where 19 teams from across the region came to compete. The Brewers had a strong showing as senior Daniel Cooper and junior Nicholas Litsky won their first round of doubles before falling to The College of New Jersey pair 8-3. In doubles, senior Evan Udine and junior Alexander Luckmann fell in the sec­ond round to a Hamilton pair 8-2. In singles play, Udine fell in the first round to Michael Gardiner from Ithaca College 4-6, 6-0, 10-7 and junior Juan Felipe Laso was defeated in the second round by Danny Polk from Stevens University 6-2, 6-2. Cooper was also downed by Stevens’ Charles Drake 7-6 (7-1), 6-2 in the round of 16. Litsky advanced to the semifinals before losing a tight match to the number two seed from Skidmore College Kai Leung 6-3, 7-5.

The women’s tennis team also competed in the ITA Division III Regional Championships this past weekend in Geneva, N.Y. In singles play, defending champion sophomore Kate Christensen fell in the second round to Alice McGinty of NYU 6-1, 6-2. Sophomore Courtney Geiss was also defeated in the second round by the number three seed Karmen Yai of NYU 6-0, 6-0. Senior Kelsey Van Noy advanced to the round of 16 before falling to the number seven seed, SUNY-Geneseo’s Mako Tanaka 6-2, 6-0. Despite a tough loss in the first round, soph­omore Morgan Fitzgerald rallied back into ac­tion to win the consolation bracket. In doubles play, Christensen and Fitzgerald advanced to the second round of doubles before dropping to a SUNY-Geneseo team 8-0. The senior duo of Lauren Stauffer and Van Noy, after falling in the first round, came back strong, making it to the finals of the consolation bracket be­fore falling to a Rochester team 8-4. The Brew­ers will be back in action this weekend at the Joss courts at 10 a.m. where they will take on Union College. They will then head to Annan­dale-on-Hudson, N.Y. to play Bard College in their first duel matches of the season.

This past weekend, the women’s golf team traveled to South Hadley, Mass. to compete in the Mount Holyoke Invitational. At the Invita­tional, the course was a par-72 over 5,845 yards. Despite the high winds on Saturday, senior Amiee Dubois carded her best career score of 76, just four over, and ended up finishing ninth out of 83 players. The team finished with a 677 for the weekend and earned sixth place out of 14 teams at the invitational. Vassar jumped over LIU-Post into the sixth position standings after finishing seventh on Saturday.

The men’s cross-country team competed this past weekend at the Purple Valley Classic in Williamsburg, Mass., one of the best races on the national schedule. It was an 8k race and the Brewers faced eight regionally ranked squads throughout the event. Sophomore Michael Scarlett helped the team earn a score of 302 as he finished 55th overall out of 244 runners, placing first for Vassar. Scarlett ran a 27:09.5, beating his previous personal best of 27:23.94. Sophomores Jack Yaworsky and Philip Brown also finished second and third respectively for Vassar with times of 27:17.8 and 27:39.8. Yawor­sky bested his personal best time of 28:44.6 while Brown continued to be a top scorer for the Brewers.

The women’s cross-country team also com­peted at the Purple Valley Classic this past weekend in Williamstown, Mass. The team ran a 6k for the first time this season and compet­ed against five nationally-ranked teams. Vassar put five runners in the top 50. Senior Ava Far­rell led the way for the fourth consecutive race of the season finishing 37th overall with a time of 23:42.6, a personal best time eclipsing her previously set best of 23:43.9. Sophomore Katie Voegtlin finished second for Vassar with a time of 23:49.8, finishing 44th overall. Freshman Christina Prater-Lee tallied her fourth consec­utive top-three finish for the Brewers, finishing 53rd overall with a time of 24:02.9.

Women’s soccer’s three-game winning streak ended this past Saturday as they took a tough 5-0 defeat against number 25 Montclair State University (MSU) on Gordon Field. The Brewers just managed two shots at a goal while MSU landed five of their 16 attempts. This puts Vassar 5-3 overall for their season and MSU 7-1-1. Vassar’s goalkeeper senior Emma Nichols managed five stops in the game, but the Brew­ers were out-cornered 6-2. The women will travel to Canton, N.Y. next weekend to play St. Lawrence University.

The women’s field hockey team began Liber­ty League play at Weinberg Field last Saturday against St. Lawrence University. Vassar, who is 7-2, 1-0 in League play, wasted no time getting on the board, scoring 2:16 into regulation with a goal by freshman Monica Feeley, assisted by senior Lauren Wiebe. A few minutes after the goal, sophomore Storm Sideleau got on the board to double Vassar’s lead with an assist from freshman Mikayla Young. Junior Emma Bracken came up with unassisted goal number three following a goal scored by St. Lawrence to regain their two-point lead. Weibe posted the fourth goal, her fourth goal of the year so far with an assist from Feeley. Freshman Paige Amico, sophomore Ashley LaMere, and junior Sophie Arnold together saved a total of six shots from the St. Lawrence squad.