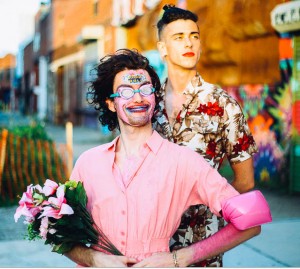 As college students living on a pretty small campus, we are constantly within a bubble. Most of us stay on campus and rarely leave. But this fall, art might strengthen the bonds between Vassar and the broader community it sits in.

On Oct. 23, from 5 to 10 p.m. Artoberfest will take over the Library Lawn. Artoberfest, Davison House Team’s Fall Event, will offer both art and music for all to enjoy. In case of rainy weather, the event will be in the Villard Room.

Davison President, Nathaniel Lindley ’18, is the main coordinator of the event. He emphasized the help and collaboration from the whole Davi­son House Team and the artists they invited. “I’m the main coordinator of the event, but all of house team has been putting in tons of effort. We’re also working closely with Drew Needleman who is the head of Fat Pug Records,” wrote Lindley.

One objective of Artoberfest is to offer the cam­pus an engaging entertainment option. To achieve this, the organizers are experimenting with differ­ent technologies. Lindley explained, “our main goal for Artoberfest is to provide an exciting and immersive art experience for everyone. The plan is to project local artists’ work onto big screens and onto Rocky while the bands are performing. We’re also exploring the possibility of showing some of the bands’ music videos while they play.”

In addition to offering an interesting experi­ence for its audience, Artoberfest also sought to connect the campus with its surrounding com­munities. According to Lindley, they reflected this goal in their selection of performers at the event. “We really wanted to go with local bands to fit with the event theme of connecting Vassar and the surrounding Poughkeepsie and Hudson Val­ley area communities,” he commented.

In order to get in touch with local musicians and artists beyond Vassar, Lindley asked for help from members of Fat Pug Records (FPR), a Vas­sar student band that cooperates with off-campus musicians. “With this goal in mind, we reached out to Drew Needleman at Fat Pug Records, who was able to book the type of show that we were looking for. Fat Pug does a lot of work with mu­sicians from underprivileged groups, so all of our bands are either queer or incorporate strong femi­nist messages into their work,” Lindley noted.

Coordinating with different parties on and off campus, FPR was able to book the following line­up. PWR BTTM, pioneers of the ‘genre-queer,’ will be headlining the festival. In the vein of glam rock, their style has a 90s garage punk sound. With their music, the duo of Hopkins and Bruce give indie music a queer voice that they felt was lacking. Having released their debut in Septem­ber, PWR BTTM has received very positive re­views so far, from publications including Rolling Stone, Pitchfork and NPR. Another performing group, Vagabon is an all-female emo and lo-fi rock group that produces the style of music with a hard and distorted sound to them. They aim to promote a feminist perspective in a musical genre largely dominated by male white performers. Re­spectively based in Brooklyn and New York City. Bruise is a female fronted lo-fi garage band while Youth Posse is a five-piece psychedelic rock band. Youth Posse will go on at 6pm, Bruise at 7pm, Vagabon at 8pm, and PWR BTTM will finish the night starting at 9pm.

For Head of Fat Pug Records Drew Needleman ’18, it was an enjoyable to help with Artoberfest. Needleman said, “FPR is proud to assist Davison House in booking their upcoming event. Given how both the local and national music scene is dominated by straight white men, FPR works to help underrepresented groups, females, people of color, and those who identify as queer or gen­derqueer have the opportunity to perform, record and get the recognition that they deserve. We’re proud to announce our lineup.”

Artoberfest also attempted to strengthen the bond between Vassar and local commu­nity through promotional strategies. Lindley explained, “Artoberfest is open to guests from off-campus, and we’re making a big push to ad­vertise it to the greater Poughkeepsie and Hud­son Valley area. We want to try and bridge the gap between Vassar and the surrounding community and feel that an event like this is a great place to start.”

Besides musical performances, Vassar’s pho­tography club, PHOCUS, will also lead a cyano­type workshop in the first hour. Popular in the late 19th and early 20th centuries, cyanotype pho­tographs produce a blue-toned effect, which is in fact where the term blueprint originally came from. The interactive workshop will take place before band performances.

Moreover, PHOCUS will showcase student art­work, projecting visual art on the stage, the sides of the audience, and even on Rocky Hall with the help of the Film Department. Artwork from the Poughkeepsie community, from galleries and ven­ues such as Mill Street Loft and the Poughkeepsie Arts Council, will also be exhibited.

WVKR has also worked with Davison House to help with Artoberfest, airing PSAs all week to promote the event in the community. Promotions Director for WVKR, Luke Dowker ’17, explained. “Our role as a community station made us a natu­ral choice for collaboration. Overall, I think we’re excited because we see this as a first step in get­ting WVKR’s name back on the student body’s cultural map.”

Cooperation took place among House Teams as well. Josselyn House Team will also be contrib­uting its part to the event. Josselyn House Pres­ident, Cecilia Hoang ’18, said, “We feel fortunate to promote and be involved with events [that] uphold queer and feminist voices and values, all while bringing our community together around radical multi-media art forms. Davison House Team is doing something totally novel in facili­tating the convergence of art, Vassar, and its sur­rounding community in this way.”

With the festival around the corner, Davison House Team is very much looking forward to Ar­toberfest, with off-campus bands of diverse styles and large screen projections. “Davison is very excited for Artoberfest and we’re hoping that this one-of-a-kind event can really provide an exciting and meaningful entertainment option for every­one,” concluded Lindley.