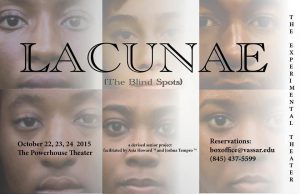 Lacuna is defined as a blank space or a miss­ing part. At once, the locution brings to mind a sense of ambiguity and negligence; the result is passivity.

However, Asia Howard ’16 and Joshua Tempro ’16 daringly defy the status quo. They react to the “missing parts” and aestheticize the “blank space” into a powerful interface of social consciousness and artistry.

This week, Howard and Tempro will present their senior project Lacunae at the Powerhouse Theater. The event’s description reads, “Lacunae, or Blindspots, is a movement-based devised piece that seeks to assert and celebrate the presence, power and beauty of those often caught in soci­ety’s blind spots–queer, gender non-conforming and femme Black people. Lacunae seeks to ex­plore the surveillance of these bodies as well as the invisibility coupled with it. For those who have been unseen and unheard.”

Lacunae blurs the line between not only per­formers and audience members but also perfor­mance and reality. The architecture of the perfor­mance will play an intrinsic role in blurring these lines. Howard wrote, “It will be performed in the round, because we were very interested in how cultural perceptions of Black femininity, much like the effect of the gaze within the panopticon design, has the power to incite self-monitoring. We also wanted to put those often in the position of surveillance at the center–the seat of power.”

Lacunae peels away the curtain to see, hear and understand those unseen, unheard and underesti­mated in the femme Black community. By virtue of this empowering nature, the project requires and consolidates the symbiosis between perform­er and viewer. Howard wrote, “I would like audi­ence members to walk away realizing that what we present to them is at best the tip of the ice­berg, and that they have been seen. For one hour of their lives they were held accountable for their complicity in the culture of invisibility surround­ing Black women, and hopefully when they leave the theatre doors and go back into a world where they can be comfortably anonymous, they choose not to. I hope that they make of themselves instru­ments to speak to these women’s existence and to help the best they can to prevent more from disappearing.”

The impressive scale of Lacunae is attributed to these two senior thesis members. Outnum­bered by the number of responsibilities, Howard wrote, “[I]t was necessary to wear a few hats…I generated most of the staging for the material that [Tempro and I] wrote as an ensemble—which I am also a part of. I’m performing in the piece and designed the set.”

Tempro also weighed in on his role, saying “[Howard] and I acted as co-facilitators of a de­vised ensemble piece, so everyone had a lot of creative input. I primarily worked as stage man­ager, and general ‘person in the room with a lot of opinions’.”

Professor of Drama Shona Tucker played a constructive role in guiding the two seniors to gain structure and momentum. Tucker wrote, “My role as adviser started over the summer as the nudge. I began by getting [Howard] and [Tem­pro] to think along both practical and abstract lines in parallel.” Tucker also gave them practical deadlines for specific tasks so that the process is more manageable.

The process of the project is just as manifold. Howard wrote, “The process began over the sum­mer, when I just did a lot of reading and compiling text that had a lot of promise. When we got back to campus, Josh and I divided up the rehearsal weeks by themes: Elements, Divinity, and Re­birth… We wrote the pieces in the vein of what­ever that week’s theme was, and our movement worked under the same influence. It really guided the product. Crunch time came during the third week, when we were asked to present a skeleton of the piece. To our surprise we already had forty minutes of the piece. Of course, even into tech, the piece is growing and shifting. That’s what’s so exciting about the fact that it’s our living baby.”

Tempro echoed Howard’s excitement about the process. “We got to learn each other’s creative style, and by the end of the first two weeks we had pieces on the ground already. We ‘finished’ up on those themes, spent the next week really putting together what we’d written, and went into tech…We’re still finding new angles and ideas, and we’re really happy with what we’ve created,” he said.

The dynamics of the piece itself are just as riv­eting as the inspiration behind Lacunae. Howard wrote, “I was inspired to do this project while studying abroad in Italy. While I thoroughly en­joyed my time there, I was often made very aware of my presence as a Black woman in the fact that I was often sexualized and exoticized. I’ve experi­enced it a great deal in my travels, but what gets me through it was often the thought that I was just passing through–a foreigner there to experience what she could while she could. It was hard to do when at home the Michael Brown Case was com­ing to yet another disappointing end, and know­ing that when I left Europe I would go home to essentially be a foreigner in my own country.”

Lacunae surely extends beyond the parameters of a mere project or performance. It is a manifes­tation of personal resonance, culture and identity. Howard wrote, “The project is important to me because Black women have been the backbones and the stepping stones for so many liberation movements that served just about everyone else, and it’s time that they’re recognized for it.”

Tempro agreed, saying, “I think it’s so import­ant that the art of Black people, particularly Black women, is seen and heard. The ensemble is put­ting their lives on the stage, and it deserves to be paid attention to.”

Lacunae’s participants can barely contain their reverence for the input of work as well as their excitement for the output of work. Tucker wrote, “I find the movement of black bodies in tandem to convey message uber exciting. I find that the students have created this vibrant, smart and challenging work (both for themselves and their audience) hopeful and celebratory. I find their courage commendable and say go further. I am happy the Drama Department has been able to support our African American Seniors on this culminating work.”

In all, Lacunae seeks to observe the nature of social blindspots and let them be known to not only audience members but conscious members of society. Tucker wrote, “I would like audiences to be more than moved. I would like them to want to pay more attention to their interactions with fellow inhabitants of this planet. I think Lacunae is the Shonda Rhimes-like vehicle of Vassar Col­lege. It’s smart; it’s got texts interwoven that are stealthy and unsettling. The piece is saying Black female lives matter. We love us. Open yourselves to respect us and love us too.”