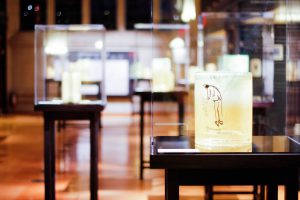 In the dim-lit North and South Wings of the Library, a series of golden glass cylinders, as if illuminated from inside with brown and green smear­ing, silently draws attention. Sitting in transparent display cases on wooden pedestals, the glasswares have black glass thread drawings on the surface, weaving together a visual narrative of the Irish novel “Ulysses.”

This is the United States premiere of Ulysses Cylinders, by Dale Chihuly and Seaver Leslie with Flora C. Mace and Joey Kirkpatrick. This collabora­tive exhibition combines glass sculp­tures created by well-known artist Dale Chihuly, with pen and ink draw­ings by painter Seaver Leslie. Two other participating artists, Mace and Kirkpatrick created the glass threads based on Leslie’s drawings.

The concept behind these cylinders started almost 40 years ago. The exhi­bition’s Project Director, Paula Stokes said, “Chihuly and Leslie did an earlier iteration of a body of work called the Irish Cylinders, where they translat­ed ideas and concepts based on Irish culture and literature into pieces of art. This was in the 1970s at the Rhode Island School of Design.”

She continued, “Almost 40 years af­ter that original body of work, the two artists decided to come back together and actually specifically focused on the works of Joyce.”

This idea to explore “Ulysses” in depth came to Leslie in London. “The works of James Joyce are very exciting in that they are both complex and very simple at the same time. I enjoy Joyce’s progress in creating characters and building a compelling storyline. His psychoanalytic undertone was also in­teresting to an artist like me.” So when Chihuly visited him, the two immedi­ately discussed using the glass medi­um to translate Joyce into sculptures.

Many stages of production are in­volved in making the cylinders, which utilized the “pick-up technique,” a spe­cial procedure invented by Chihuly himself. It took a group of 10 to manu­facture each cylinder.

Stokes elaborated on this technique. Paula Stokes “The objects themselves are blown glass and the drawings are translations of Leslie’s sketches in pen and paper, or pencil and paper. Flora and Joey translated those drawings into glass thread drawings, which are bent, shaped and formed into the il­lustration. During that glass-making process, these thread drawings are picked up di­rectly from the molten glass and embedded right into the hot glass. They’re not painted; they’re not drawn on. They’re actually fused together right into its surface…The technique allows one to translate drawings directly onto sculpture in the process of making hot glass. It’s very imme­diate. It’s also very fragile.”

The nature of this creative process requires collaboration among various parties. This coop­eration can be difficult. But Chihuly and Leslie made it work. Leslie recounted, “I’m a painter and he’s a sculpture working in 3D. He has al­ways admired my watercolor paintings. When we collaborated, there have never been any dif­ficulties. He let me do what I want and I let him do the same. It is a very rewarding process, and working with glass is very fun and exciting.”

Last summer in 2014, the works was first displayed at Dublin Castle, in Dublin, Ireland. Working to connect with Irish galleries and an Irish national herself, Stokes talked about the cyl­inders’ world premiere. “It was during Blooms­day, which is a big festival for James Joyce…It was a huge deal and it was important for the artist the work would be premiered in Ireland because obviously the inspiration being Joyce and to get some kind of approval from the Irish people,” she recounted.

Returning to the U.S., the exhibition found its connection with Vassar through Chihuly’s wife, Leslie Jackson Chihuly, an alum from Class of ‘83.

With a layout plan from the Chihuly Studio, Associate Director of the Palmer Gallery, Mon­ica Church, and Curator and Assistant Director for Strategic Planning at the Loeb Art Center, Mary-Kay Lombino worked with Stokes to set up the art pieces. “During the installation we worked from a layout plan for each room and each object within each room…Because a plan is good in theory, once the objects were placed in on the pedestals, we were able to make decisions about if a pedestal needed to be moved a few feet one way or another to create the best flow for viewers of the exhibition,” she explained.

Stokes added that while they sought to pro­vide an organic viewing experience for the au­dience, there was also a chronological order to the arrangement of the works so that visitors can have a guideline to hold onto.

As the exhibition has been set up for a few weeks, it has already caught the eyes of many Vassar students. Raquel Jackson-Stone ’16 com­mented, “I thought they are really interesting. Some cylinders try to tell a story, while some others seem random. I have seen Chihuly’s works in other places, and they are complete­ly different from these. Chihuly often does big blown glass sculptures, and I’ve seen one exhi­bition in a greenhouse in Ohio. This collection is much smaller in size, which perhaps views each piece as a part of a bigger whole.”

Also trained in glass arts, Stokes spoke highly of this body of glass works. “I love the simplicity of the work, even though it’s not really simple. It has apparent simplicity because it’s a very sim­ple slender shape. Like a blank canvas, it anchors everything together but it doesn’t take away…

She continued, “I also love the fact that the artists are ambitious and audacious to come and take on a classic masterpiece of that level and try to interpret it into a completely different medi­um. It’s a risk. It’s making yourself pretty vulner­able…And artists need to do that.”

Library is an unconventional setting for art­works, but it suits this body of works quite well. Stokes explained, “Something that’s kind of unique about Chihuly is how he often replaces his work in context that are not always muse­um-like. He’s famous for not just his museum work but his gallery work…So by placing this specific body of work, which is inspired by a novel but is also a piece of sculpture of art, he hopes to broaden the audience to people who might not even know about him in this context. But also, the work itself creates essentially a vi­sual portal to the book that for some people who would be intimidated by it to have access to it. It is very democratic…I think that’s part of it – to demystify part of the complex novel and make it more accessible to people and to a different audi­ence. It’s kind of provocative in a way.”

As Church concluded, “It works incredibly well with the library’s clear leaded windows that stream in natural light. The sculptures are being seen in a spectacular space, surrounded by books, and students doing research, what could be a better fit?”