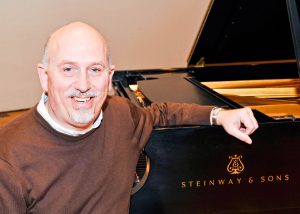 The Vassar Music Department’s fall concert series will continue this Saturday, October 24th, with its Jazz Event. A medley of faculty members will be performing, including Peter Tomlinson, piano, Mike DeMicco, guitar, Jim Osborn, trumpet and flugelhorn, Ed Xiques, saxophones, Lou Pappas, bass and from outside of the college, Tom Melito on drums as a spe­cial guest artist. Melito teaches jazz percussion at Central Connecticut University.

The group will be playing original composi­tions from Peter Tomlinson, Mike DeMicco and Ed Xiques, and the arrangement is produced by Lou Pappas. This is the first time that the jazz sextet will be performing all together, as they have only performed individually or in smaller groups for the annual Music Department Wel­come Concert and Commencement Concert. For Osborn, “this is a rare opportunity for all of us to rehearse and perform together as we are all collaborating on songs and arrangements. We are excited to be playing for our wonderful students and their friends and for our friends and families from the local community!” The event provides an opportunity for these talent­ed musicians to come together and perform as a collective entity for the Vassar community.

The collaboration was assembled by Jim Os­born and Peter Tomlinson and, while the mem­bers perform regularly in the tri-state area, this is the first time they will be performing as a jazz sextet at Vassar. Osborn has been teach­ing at Vassar since he started teaching trumpet in 1982, and he started the Vassar Jazz Ensem­ble in 1983. He now directs the Vassar College and Community Wind Ensemble and four jazz combinations in addition to teaching trumpet and Jazz Ensemble. The members find the ad­dition of Tom Melito as indispensable. Accord­ing to Central

Connecticut University, Melito has been on the New York City Jazz scene for many years and has performed in several prominent events, including the JVC, Montreal and Berne Jazz Festivals. His drumming has been heard behind such varied artists as John Pizzarelli, Frank Wess, Harry Allen, “Sweets” Edison, Lew Soloff and Bill Watrous and his various televi­sion appearances include the CBS Early Show, Entertainment Tonight and CNN World Beat. He has also been active in the jazz education­al community and has created many different CDs for “Windplayer” Magazine. The concert also hopes to highlight the work of Peter Tom­linson, who will be performing multiple orig­inal compositions. In 2010, Tomlinson started the Poughkeepsie Day School, where he teach­es students in grades K-12 piano. He has studied with Barry Harris, Armen Donelian and War­ren Bernhardt, and has recorded albums with Grammy Award winner Jay Ungar. The Music Department describes Tomlinson as “a highly sought after leader for small jazz combos as well as a sideman and accompanist to jazz vo­calists.” Ed Xiques, an accomplished saxophon­ist, has worked with various artists, including Aerosmith, The Jackson Five, Tony Bennett, Liza Minnelli and Frank Sinatra. He has also performed for the Hudson Valley Philharmon­ic and New York Pops, giving him an accom­plished and diverse resume.

The concert will be showcasing jazz through original compositions as well as some classic jazz standards. Lou Pappas, who will be playing double bass, describes the event as “a wonder­ful concert, not only for jazz lovers, but anyone who appreciates good music played by great musicians!” Pappas will also present a song, “Blues for Jim San,” by bassist Don Thompson, which is one of his favorite tunes. Prior to Vas­sar, Pappas had been a bassist for the United States Military Academy Band, and the Music Department states that “he has performed at jazz festivals across the United States. Mike DeMicco, an accomplished guitarist, has re­ceived many accolades and praise from key outlets in the jazz community. The Jazz Times describes DeMicco as “the perfect blend of soul, polish, and technique.” His classical jazz is heavily beneficial to the jazz sextet, and his extensive experience in various jazz festivals and ensembles makes him perfect for this con­cert.

In regards to the event, Ed Xiques believes that “it is important to experience all kinds of music live. Recordings are important but beats the experience of live music.”The con­cert features a cross-style of jazz, from be-bop to Broadway, Latin, Swing, Ballads, and many other styles. Even if you have never listened to jazz before or attended a concert at Vassar, why not start now and come to this fantastic event that the faculty has worked very hard on? The music program hopes to highlight this unique event, as it is distinct from previous jazz events at Vassar. Osborn encourages “everyone to come out for an fun evening of straight ahead jazz and swinging arrangements presented by your very own faculty members! Come see if we practice what we preach!” The concert will start at 8 p.m., and, as always, it is open and free to the public.