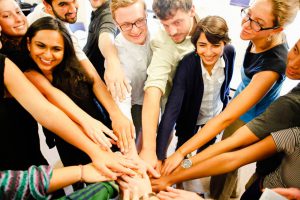 Yasmeen Silva ’15 hit the ground running af­ter she graduated last year. This Thursday, she was already back on campus as a recruiter for a new organization called Change Corps, a year-long training program. The employer info session, hosted through the CDO, was held in the Jade Parlor for students who wanted to pursue a career in organizing.

Silva started the session by explaining what Change Corps is. “Change Corps is a paid, one-year, full-immersion training program in grass­roots organizing. Organizers are given compre­hensive training in grassroots organizing tactics and strategy after which they have the responsi­bility of running campaigns for some of the na­tion’s leading progressive social change organiza­tions,” She explained.

She went on, “Past and present partners of Change corps include Everytown for Gun Safety, MoveOn.org, Democracy for America, the Toxics Action Center and the National Education Asso­ciation.”

Change Corps is a way to experience working with and training under many influential and ex­perienced people. Among others are names such as Bill McKibben of 350.org, Justin Ruben of Mo­veOn.org, Van Jones, of the Ella Baker Center for Human Rights and host of CNN’s Crossfire, and Cecile Richards of Planned Parenthood. Change Corps provides the opportunity to learn the ins and outs of organizing and campaigning after which individuals get assignments. Planning and running campaigns, talking at conferences and establishing powerful coalitions are all part of the job at Change Corps.

Change Corps’ goal for the future is to provide field support for today’s urgent and important campaigns and train organizers who will hope­fully become leaders and activists in the future and take social initiative.

Last year, their campaign partners included MoveOn, Democracy for America and Every­town for Gun Safety. The organizers turned out voters to the polls last fall to lift up Senate candi­dates who supported women’s health, advocated for background checks and safer gun laws that will save lives. This year, they are adding more campaigns—working with the National Educa­tion Association, Toxics Action Center and more. Organizers end up gaining real hands-on experi­ence and making a genuine difference in the is­sues they are passionate about.

Yasmeen went on to explain why she, person­ally, wanted to join Change Corps and what she’s been doing with the organization. “I had done a bunch of organizing here at Vassar and I knew that organizing was something I wanted to do for the long haul, but I never thought I could make a career out of it until I had paid my dues either working on the ground as a volunteer or working unpaid internships.”

Associate Director for Employer Relations, Susan Smith confirmed Change Corps’ presence at Vassar. As she said, “In February, 2014, David Rossini ‘03, President of Change Corps, hosted an information session on the Vassar campus. Sever­al students interviewed shortly after that session, and Caroline Stanton ‘14, was hired for the fol­lowing year. Caroline returned to campus last fall and hosted an information session, and we look forward to Yasmeen Silva’s visit on Thursday, Oc­tober 22. A triple play of Vassar alumnae/i.”

Silva’s path to this point did not originally lead to grassroots organizing. “To be honest, I really want to ultimately work in the Domestic Vio­lence movement, but I was under-qualified (as a new graduate) for almost all of the paying jobs within that movement,” She said. “I accepted the job with Change Corps so that I could acquire the skills that are sought after within the movement, without compromising my financial future.”

Silva’s role as a Field Organizer gives her the type of experience that she believes will be ben­eficial for not just her future, but the futures of the many lives that she is impacting. “I am a Field Organizer with Change Corps. Right now, I am working on a campaign for one of our partners, the National Education Association (NEA). De­spite being the largest labor union in the coun­try, the NEA is still a victim of expanding right to work laws (this is especially evident in Michigan, where I am organizing), and general union-bust­ing and anti-union rhetoric.”

She continued, “In addition, I am aiding the NEA with a campaign they launched last year called ‘Degrees Not Debt.’ Right now we are focused on ensuring that the Higher Education Act is re-authorized with expanded Pell Grant provisions, as well as pushing something called the Student Aid Bill of Rights, which would help protect students who take out loans to pay for school. The ultimate goal is to both pass those pieces of legislation as well as get more students engaged with organizing through Degrees Not Debt.”

A valuable lesson Yasmeen has learnt from Change Corps is her organizational skills and how to truly make a difference. “I have learnt dif­ferent forms of organizing, and how to organize in different settings. Essentially, as their slogan would say ‘how to get change unstuck’.” She said.

The information session was for all Vassar stu­dents who are interested in this kind of field or career and wanted to learn more about it. Along with the experience, Change Corps provides the additional comfort of monetary support. “Change Corps provides a real/clear pathway for students who want to be professional activists and provides training and experience,” Silva said. “Most importantly it and pays them.”

Many people, like Silva herself, don’t realize that they can make a career of grassroots orga­nization. Silve went on, “Not everyone has the option of working on campaigns they care deep­ly about without making an income until they build enough skills and networks to do the work full time. Change corps allows people to hit the ground running with stable footing in that sense.”

Change Corp will be holding an information session on Thursday 10/22 at 7 p.m.