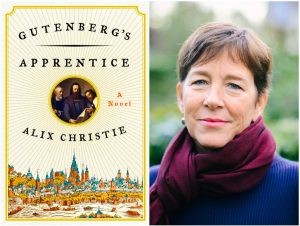 Our days are filled with books, whether we’re curled up with one before going to bed or groaning at the 300 pages of reading we’ve left to do in a single night. Sometimes, books can define a person. The Gutenberg Bible defines all books.

Without the Gutenberg Bible none of this would be possible. How did this revolution of the written word come about? On Wednesday, Oct. 21, Alix Christie ’80 gave a lecture on the making of the Gutenberg Bible in the Class of ‘51 Reading Room in the Library. Christie is the author of the recently published work, “Guten­berg’s Apprentice: A Novel,” which follows Johann Gutenberg’s actual apprentice, Peter Schoeffer, as he observes his master print and pub­lish what became known as Guten­berg’s Bible, running into contention with the Catholic Church along the way.

Christie explained that her grandfather was a strong influence when it came time to writ­ing the book. She said, “I had gotten an MFA in fiction in the late 1990s, and starting looking into the history of the Gutenberg Bible when I moved to Germany in 2003. My grandfather was a letterpress printer and type-founder and I’ve been printing myself since I was sixteen. But the real preparation was reading, reading, read­ing, in German and French and English, about the medieval period in that particular city of Mainz, Germany, where printing was invented. I spent a few weeks there soaking up the atmo­sphere, and then I started writing.”

The Gutenberg Bible happens to be the first widely published book, revolutionizing West­ern civilization. It was printed in Germany in the mid-15th Century by Johannes Gutenberg, before its wide-spread distribution throughout Europe.

Before Gutenberg popularized the printing press, books were written by hand. This pro­cess could take a tremendous amount of time. Gutenberg’s mass printing allowed for knowl­edge to spread throughout Europe at a greater pace, radically altering the publishing world and civilization as a whole.

Before she arrived at Vassar, Christie would print books with her grandfather’s printer and eventually her own. During her time at Vassar, Christie was a philosophy major, played soccer and wrote for the Vassar Chronicle. Originally from California, after moving into Main Build­ing, Christie was amazed at the types of people she was able to interact with on a daily basis. “Vassar was a transformational experience for me,” She said. “The small and vibrant seminars and general atmosphere of intellectual serious­ness was amazing.”

After graduating, Christie pursued a Masters degree in Journalism at University of Califor­nia, Berkeley. Simultaneously, she became an apprentice of printing for Yolla Bolly Press. She later also got a Master of Fine Arts degree from Saint Mary’s College of California.

In the past, Christie worked as a foreign cor­respondent for several newspapers. She now writes short stories, several of which have been featured in magazines. “Gutenberg’s Appren­tice” is Christie’s debut novel.

Several years ago, Christie, who lives in Lon­don, was just beginning to write the novel when she came into contact with the Associate Direc­tor of the Libraries for Special Collections, Ron Patkus, when he was in London for Vassar’s ses­quicentennial.

Recounting how they met, Patkus said, “By chance we sat next to each other at a table, and she then told me about the novel she was writ­ing, the novel which has become ‘Gutenberg’s Apprentice.’ Of course the topic interested me because of my work with early printed books, and we began to share information.” He went on, “What fascinated me most about her work was the fact that she was approaching her topic using the art of fiction.”

Christie’s return to Vassar was the result of a chance meeting with English Professor Bob DeMaria while he was in London. “Last year, as director of the Media Studies London Abroad program, I taught a course called ‘Print Culture of London from Caxton to Pearson.’ One of the many places my students and I visited was the St. Bride Printing Foundation in the city of London, right across the street from the place where Wynken de Word set up his printing shop at the turn of the end of the 15th century,” DeMaria said.

He went on, “They had a great program of teaching the art of printing. We all got a chance to try out one of the nineteenth-century cast iron presses!”

The group ended up with more information than just about the printing press. “Our guides really knew their stuff, so when they recom­mended a recent speaker at the Foundation I took notice. That speaker, of course, was Chris­tie,” DeMaria said. He got in touch with her soon after that. After “Gutenberg’s Apprentice” was published, Christie contacted DeMaria about giving a lecture to coincide with the nov­el’s paperback release, which would bring her back to the United States.

Despite the fiction genre of the novel, De­Maria said that he still greatly respected Chris­tie’s work. He explained he was not an expert on Gutenberg. “My field is 18th century British literature. I am a scholar and I’m often suspi­cious of novelists because they naturally feel they can embellish history, whereas I want to hold them to the facts. In this case, however, we have a novelist who really knows the facts, and they come through along with the richer and more detailed narrative that makes up the fic­tion. That’s an unusual combination.”

Currently, Christie is researching to prepare for her next historical novel set in 19th century Montana. She also recently finished a novella called “Motherland” about a female guard in the Nazi concentration camps. In addition to writing, Christie frequently reviews books and art exhibits for The Economist.

“Gutenbuberg’s Apprentice” is more than a mere historical account. As described on the back cover of the book, “Peter and the men he admires must work together to prevail against overwhelming obstacles—a battle that will change history… and irrevocably transform them.”

Christie responded to what lasting influence she hoped her lecture would have, saying, “I would hope that the lecture will inspire people to reflect on how massively the last media rev­olution changed the world five hundred years ago and therefore think more deeply about how our own technological revolution is rewiring our world today. Tools like these change how we communicate and live and even think, and it’s absolutely vital to make the right choices about how we use them. Every new technology brings fear and excitement and a lot of ambiva­lence, and that’s where we are today.”