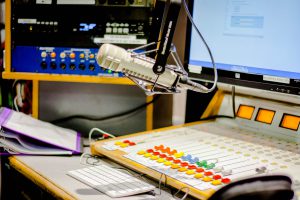 The students behind WVKR, Vassar’s inde­pendent radio station, already put in the work to provide alternative and independent shows. They were recently contacted by the creators of the new Cymbal app to help pro­vide the support and structure to bring WVKR out of the radio station.

Cymbal recently reached out to WVKR, and they are now in the process of helping WVKR increase their listenership. Head of Growth for Cymbal Charlie Kaplan, described the app, ex­plaining it is a new iPhone app for music dis­covery. “It’s commonly compared to Instagram, but rather than posting photos or videos, you post songs from Spotify or Soundcloud,” he said. “Users follow friends, artists, and every­one in between, and their feed becomes a fully playable, constantly updated playlist, curated by the people who matter to you.”

This year’s General Manager of WVKR, Kathryn Marshall ’16, had previously heard of Cymbal before WVKR started working with them. “I vaguely knew of Cymbal before they reached out. A label I was interning for last summer was working with the app on a fea­ture, and they actually ended up being one of the originally featured labels on Cymbal,” Mar­shall said.

Collaborating with Cymbal means that WVKR will become a much more familiar name among those outside of Vassar and im­mediate Poughkeepsie communities. Marshall continued, “Beyond increasing our listener­ship, Cymbal provides a new way for us to gain traction with labels, artists and other stations. The feature lets Cymbal users find and follow us easily, and we hope that this will increase our online visibility.”

She went on to say, “This year at WVKR, the executive staff is really working on our re­lationship with a new generation of listeners, in addition to maintaining our strong support from the community.”

As Kaplan explained, Cymbal serves as both a place to listen to music, and also as a form of social media. He said, “The big difference between a song on Cymbal, and a song you hear anywhere else, is that it actually matters to someone who matters to you. It’s not about an algorithm that collects data about your pref­erences and then tries to give you things you’ll like. It’s also not a constant feed of every song your friends are listening to. It’s just the song that matters to them most, right now.”

Music streaming services like Spotify, Soundcloud or Pandora are already commonly used, but Cymbal functions differently. “Cym­bal’s mission is to be the single place everyone can come, regardless of the kind of music they love, or how they like to stream, and share to­gether,” Kaplan said. To help achieve that goal, Cymbal has enlisted college radio stations, in­cluding WVKR, to create even more unique content.

Kaplan explained, “College radio has histor­ically been a home for original music curation, and the greatest advocate for alternative, out­sider and emerging music. One thing I have to decide in trying to make Cymbal the web’s best community for discovering music is who should be that community’s most important voices.”

Out of all the college radio stations in the country, Kaplan chose Vassar as one of the lucky few to be an early part of the app, partly because his sister is an alumni who graduated in 2007. “She’s four years older than me, so I was visiting her as an awestruck, admiring high schooler, thinking all of her friends were the smartest, coolest people I could imagine,” Ka­plan remembered.

Vassar is one of the charter college ra­dio stations featured on Cymbal, along with WOBC (Oberlin), WRMC (Middlebury), WPRB (Princeton) and a few more. “There’s this sense of community between the featured college stations, we follow each other and get a glimpse of what’s being played at stations across the country,” Marshall said. She went on, “There are other types of featured accounts as well: artists, labels. A couple days ago, a band I really like, Small Black, started following us. Building connections between artists and la­bels is crucial to the way college stations work and Cymbal provides a new platform for the community to grow.”

WVKR plans to work with Cymbal in other ways than just connecting with artists online. Marshall said, “By improving our digital pres­ence, we aim to provide listeners with a variety of ways to listen and engage with the station. For example, we use the app to post music that is played on air, as well as new music being sent to the station.”

She went on, “Brendan and James, the music directors, are using the app to highlight new music sent by independent labels across the globe. Luke, the promotions director, is aiming to post songs reflective of our diverse program schedule.”

WVKR plays music all day long, so students should tune in whenever they get a chance to take advantage. “College radio stations serve as a refuge for independent music and talk. With the increase in commercial stations na­tionwide, alternative programming is being silenced,” Marshall said. “Dedicating a feature to college radio stations is an incredible way to support independent programming. While the digital age has presented new opportunities to be heard in places beyond our broadcasting range, reaching an audience can still be diffi­cult,” she added.