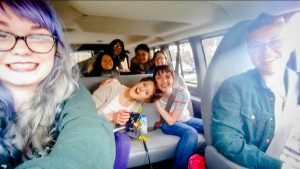 “While VARC certainly agrees that animals should be treated better, we think that the goal should be to end exploitation not just make it more bearable. A cage is a cage no matter how big and there is no way to humanely kill some­one who does not want to die,” said VARC co-president and events coor­dinator Brooke Thomas ‘17.

Vassar Animal Rights Coalition (VARC) tends to make a strong im­pact on people. Thomas explained how she had never been a part of an organization like VARC. “I was a vegetarian and I occasionally gave people leaflets or told them about documentaries,” She said. “VARC has provided me a more organized plat­form to do those same things.”

VARC was founded with the hope to raise awareness of and combat the mistreatment of animals. While any­one, vegetarian or not is welcome to join the group, it is hard for members of VARC to find common ground with the rest of campus. “I have en­countered many people at Vassar who disagree with what VARC is trying to do,” Thomas said. It is not just enough for other students to pick and chose what they believe can be nested under the label “animal cruel­ty”. “Many people seem to agree that animals are treated poorly, especially in factory farmed situations, but they do not agree that all use of animal’s bodies or products is something that should stop,” Thomas explained.

Olivia Price ’17, another mem­ber of VARC, said that it is hard to be a member of a group that is not taken seriously. “It definitely never felt good that it seemed the campus didn’t respect the group,” She said. “It was hard, especially freshman year when social life seemed like the most important thing ever, to feel like people thought we were extreme or unreasonable.” She added, “Tabling at Meatless Monday was just so disheartening.”

Thomas went on, “Some of these people have been vegetarians whose goals are to improve the welfare of animals and some have been non-veg folk that tend to agree that animals should be treated better but either have not chosen to change their diet or they eat mostly local, ‘hu­manely slaughtered’ meat.”

To widen awareness around campus about what VARC stands for, VARC is hosting a con­ference later in the year. Thomas elaborated, “For the fall semester we have participated in planning the 3rd annual Students for Critical Animal Studies Conference. This will be held at Vassar on November 20th and 21st. We are also planning something in regard to Vassar’s deer cull.”

The conference is a student-run offshoot of the Institute of Critical Animal Studies. “All pre­senters at this conference will be current stu­dents,” explained Thomas. “Presentations will be about anything animal related that students are doing work on.”

The event description reads, “SCAS finally will only accept papers that promote radical critical intersectional presentations that foster total liberation from an academic-activist per­spective. We encourage marginalized voices and perspectives. We accept only presentations from students.”

VARC hopes to use this event to draw more people to their organization. They want to show how VARC is for all types of people, vegetarians, vegans and animal rights activists alike.

Campus Dining Liaison and Feed-In Coordi­nator Kacy King ’16 said that she joined VARC because of her own background as a vegan. “I joined VARC because I’ve been vegan since high school, and anti-speciesism activism has always been important to me,” She said. “I wanted to join a group both for the community aspect and so I could learn and grow as an activist,” She added.

Christian Vivar ’17 had a very different ap­proach to joining VARC. But after joining as a sophomore, he was hooked. “I joined as a soph­omore and was intrigued by topics I had never thought about before (such as speciesism), so I attended VARC meetings regularly thereafter,” Vivar said.

He added, “VARC is my first experience with an animal rights organization. This is partly due to the fact that I didn’t become interested in ani­mal rights in a serious way until late in my fresh­man year, but also because I had little exposure to animal rights growing up (aside from the oc­casional news story, social media, posters, etc.).”

For Thomas, VARC’s distinct approach to an­imal rights was what drew her to the group. “I joined VARC because the forms of activism that I observed the members performing appealed to me. In many animal rights circles issues of race, class and gender are not talked about,” She said.

Thomas added, “VARC members, however, were openly talking about how things like Peo­ple for the Ethical Treatment of Animals (PETA) campaigns were sexist and how food access could affect someone’s ability to go vegan.”

VARC actively ensures that, as an organiza­tion, they are not blindly following the guide­lines set by other animal rights movements. Thomas explained, “Since I have been here, VARC has consistently been critical of the An­imal Rights movement and has tried to under­stand liberation as something that must be col­lective for both non-humans and humans.”

As part of their efforts, King and Thomas help plan plenty of food-related events. “VARC does a lot of cool stuff like volunteering for animal sanctuaries, hosting speakers on campus, giving away free vegan baked goods during midterms/ finals (part of my position as a feed-in coordi­nator), and also some more low key events like potlucks,” King said.

Thomas went on to explain that their plan­ning is not limited to fall semester. “For the spring we plan to have a tasting of some sort (in previous years we have hosted tastings for vegan cheese and vegan bacon). We also have potential plans for events surrounding vivisection and in­tersectional activism,” She said.

VARC has had a presence at Vassar for 40 or 50 years. “I do not know exactly when VARC started or what their mission statement was but we are working on developing an institutional history by reaching out to VARC alums,” Thom­as explained. “I would estimate that it started in the 70s or 80s as a general animal rights club with the goal being to help bring awareness of animal cruelty to Vassar students,” She added.

According to their org description, VARC is available as a way for students on campus to combat species-based violence, and encourage people to reflect upon the societal objectifica­tion of non-human animals. “These forms of objectification include but are not limited to the use of in entertainment and in clothing, ex­perimentation on, and physical consumption of non-human individuals,” the description says. For members of VARC, being a part of the org certainly leaves a lasting impact.

Vivar said that he could definitely see his pas­sion for animal rights spreading beyond Vassar. “I would certainly like to continue taking part in the animal rights movement after Vassar, though I probably wouldn’t make a career out of it,” He said. He added, “I am passionate about animal rights though, so I’m sure I’ll find some way to continue and hopefully make an impact.”

She concluded, “I would also like to say that as an org that works somewhat within a move­ment that is steeped in racism, sexism and clas­sism, we are open to constructive criticism. While I do think the way we approach things is pretty different than mainstream Animal Rights we surely aren’t perfect and it is important for Vassar’s activist community to be able to call each other in and educate each other on how to be better.”