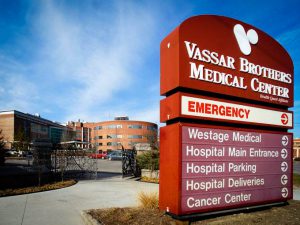 Courtesy of the Poughkeepsie Journal

On Thursday, Oct. 8, the New York State Department of Health approved the pro­posed certificate of need for plans for a mas­sive expansion project of the Vassar Brothers Medical Center in Poughkeepsie.

Vassar Brothers, the Mid-Hudson Valley ar­ea’s principal medical facility, is run by Pough­keepsie-based hospital healthcare network Health Quest, which announced the project earlier this May in the midst of concurrent plans for the $88 million consolidation of two hospitals in nearby Kingston, run by fellow medical group Health Alliance of the Hudson Valley.

Looking to expand its own flagship medi­cal center’s size and patientcare capabilities, Health Quest plans to construct an entirely new, state-of-the-art building that will connect to Vassar Brothers’ existing facilities, some of which have been in use since the hospital’s opening in 1887.

Equipped with 30 critical-care units and an emergency department and trauma center with 66 treatment rooms, the new building is hoped to be the latest in New York State’s developing list of innovative medical care fa­cilities while also emphasizing the importance of sustainability in its expectations to receive LEED certification from the U.S. Green Build­ing Council. The project will also include new operating rooms, a cafeteria and verandah area, a conference center and ample space for vis­iting families and friends (Daily Freeman, Ex­pansion of Vassar Brothers Medical Center in Poughkeepsie gets green light from NY health department,” 10.15.15).

“Vassar Brothers Medical Center will trans­form patient care and the patient and family experience in the Hudson Valley with this proj­ect,” Vassar Brothers President Robert Fried­berg remarked at the time of the announce­ment. “Making that transformation requires state-of-the art facilities to provide patients with the privacy and healing environment they deserve” (Daily Freeman, “Vassar Broth­ers Medical Center in Poughkeepsie plans 700K-square-foot, $466 million expansion,” 05.21.15).

Chairman of the Board of Trustees at Health Quest Gregory Rakow echoed Friedberg’s satisfaction with the upcoming construction. The new pavilion will serve all of us fortunate enough to call the Hudson Valley our home,” Rakow wrote in a press release. “It will become a landmark and asset for the community, a site known for excellent patient care, cutting-edge services and a home for our top-level medical staff” (Daily Freeman, 05.21.15).

The project plans, which were approved at a meeting of the Public Health and Planning Council of the New York State Department of Health in New York City on Thursday, are ex­pected to cost over $466 million, making this the largest construction project in the history of the City of Poughkeepsie. Funding is expect­ed to be received primarily from Vassar Broth­ers funds and hospital revenue bonds, though the Foundation for Vassar Brothers Medical Center will conduct an additional fundraising campaign as well.

In addition to providing top-quality health­care services to the surrounding community, the massive undertaking will also help support the local economy, which many have found se­verely lacking in recent years. At the peak of the project’s building, planners expect to be able to hire between 300 and 400 local con­struction workers.

As Poughkeepsie Mayor John Tkazyik put it, “[This] will serve as a catalyst for econom­ic development and provide a stabilizing en­vironment for businesses and homeowners in Poughkeepsie. It will play a major role in community revitalization and allow residents access to high-quality health care they deserve right here in our community” (Daily Freeman, 05.21.15).

Completion of the building, however, is not in the near future. With the design plans now approved by New York State, groundbreaking for the project is set for July 2016, with loose aspirations for the building to open in January 2019.

Being that the new facilities will not be available until even current freshmen are only months away from graduating, how ex­actly Vassar Brothers and Vassar College’s re­lationship will be affected by these resources remains to be seen. Although students often utilize the nearby hospital in cases of exigent medical situations or off campus emergencies, it is unclear how, or if, the project will affect students differently from members of the sur­rounding community.

Director of Health Services Irena Balawajder maintained that, in spite of that lack of clarity, students’ wellbeing is at the heart of the Col­lege’s health services staff, and that the pros­pect of being able to offer new, innovative care in necessary circumstances is exciting to her and members of her department. She wrote in an emailed statement, “A new state of the art medical facility can only have a positive impact on the future health care of our students and the Vassar community and we look forward to seeing this project develop.”