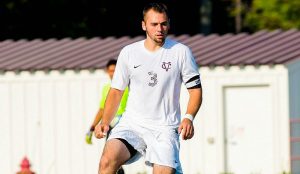 Women’s VCXC traveled to Bryn Mawr Col­lege, Pa. for the annual Seven Sister’s tourna­ment, where the Brewers competed against Wellesley, Mt. Holyoke, St. Catherine, Simmons and Smith. The Brewers finished third out of seven, although they were expecting to finish first or second. This was the first time since 2009 theyA have not finished in the top two. Wellesley Blue dominated the race, with five of their runners finishing in the top six. Vas­sar just lost the runner-up spot to Mt. Holyoke 79-81, despite the Brewers having a lower to­tal time than them. Vassar’s top runner of the meet was freshman Christiana Prater-Lee, who finished 12th with a time of 23:42.4, followed by Jemma Howlett and Ava Farell, who finished 14th and 16th with times of 23.45.4 and 23:48.2 respectively. The women have this weekend off to prepare for the Liberty League Champion­ships that will take place on Oct. 31.

The men had a strong weekend, finishing 10th out of 30 in the competitive Connecticut College Invitational in New London, Conn. The Brewers had a top five average of 26:37 and had a total team score of 235 points. Sophomore Mi­chael Scarlett, finishing 13th overall, not only led the Vassar pack but also had a personal best time of 25:43.2 in his first race under 26. With­in the Brewers, he was followed by freshman Luke Arsenault, who finished 36th overall with a personal best of 26:19.6, and by sophomore Jack Yakorsky, also posting a personal best of 26:26.5. All the runners stepped up in what proved to be a pivotal turning point for the squad. The men also have this weekend off to prepare for the Liberty League Championships.

The men took a four and a half hour drive to Geneva, New York to face Hobart College this past Friday. The Statesmen outshot the Brewers 12-2 in the first half and controlled the momentum. Freshman Derrick Acheampong’s 18th minute goal proved to seal the victory for Hobart, despite several scoring opportunities from Vassar late in the second half. The next day, the men traveled to Rochester to play Rochester Institute of Technology, again los­ing 1-0. Senior goalie Sebastien Lasseur had a game-high of six saves. Yet, RIT scored in a penalty kick awarded in the 30th minute. The Brewers finished with 11 shots, RIT with 14. The Brewers’ overall record is now 6-5-2 and Liberty League record 2-3-0. This weekend, the men are traveling to Troy to play RPI.

On Friday, Oct. 16, women’s soccer battled against number six William Smith. Vassar was outshot 27-4 and ultimately fell to the Herons 3-0 after two quick first half goals and an insur­ance score in the second period. The next day, the women played RIT in another home game, ultimately losing 2-1 at overtime, although the Brewers outshot them 18-8. The Brewers trailed 1-0 for most of the game, due to an early ninth minute goal from RIT. But the Brewers managed a goal in the 71st minute from fresh­man forward, Rebecca Andrews, who launched a deep shot into the top left corner. This loss brings their record to 7-5-2 overall and 1-2-2 in the Liberty League. This weekend, the women have another home game against RPI.

The lady ruggers had a bye from their Tri- State Rugby Conference this weekend, and so they played against the New York Women’s De­velopmental XV, and in a close game, the Brew­ers lost 22-24. The New York Women’s Rugby team featured older and experienced players, many ex-college players. During the first half, the Brewers had some unlucky turnovers, as well as were slow to mobilize in offense. The score at halftime was 0-24, but the Brewers dominated the second half, conceding no tries and scoring four. Despite being a non-confer­ence friendly, this marked their first lost of the season. Their record now stands at 5-1-0.

The women traveled to Rochester, NY to face the University of Rochester on Monday, Oct. 12, ultimately falling in a tough 1-0 contest. The Brewers then experienced a tough confer­ence loss in an away game against Skidmore College this past weekend, losing 10-2. Vassar’s freshman goalie, Paige Amico, made four in-net saves for the Brewers, but Skidmore, ranked 10th in the latest National Field Hockey Coach­es Association poll, outshot Vassar 21-4. Senior Lauren Wiebe made both of Vassar’s goals, making her just one goal behind Ebony Boul­ware for second place on the all-time goals list. The women will travel to Union College for another league game this Friday. Their record is now 9-4 overall and 2-2 league.

The women’s golf team traveled to Welles­ley College this weekend to conclude their fall season at the Ann S. Batchelder Invitational, where they finished seventh as a team. Their total team score at the opening round on Sat­urday was 351. Similarly, the Brewers scored 350 on Sunday, cementing their seventh place position. Sophomore Kristin Diep had a ca­reer-high weekend, with back-to-back rounds of 81, leading her to tie for 13th overall with a 162. The Brewers’ season will start back up again in April 2016.