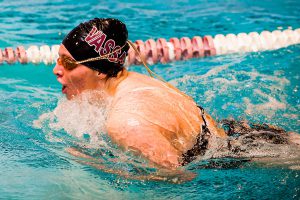 Looking to make a splash with the help of their newly hired dive coach, the Vassar men’s and women’s swimming and diving teams are more than ready for their upcoming season, which officially began this Wednesday, Oct. 21 against Bard College. Head Coach Lisl Prater-Lee has been impressed thus far with the team’s work ethic; “We are just finishing up our fourth week of team training capped off by double swim practices during fall break. Prior to our first practice on Monday, Sept. 21, the team did well getting themselves in the pool and weight room. That, coupled with what they did over the summer, has positioned us well for great fall training.”

Junior Kayla Schwab also spoke strongly of the dedication of her team, “I feel that this year, we have really stepped up the level of inten­sity with which we are approaching our train­ing. Like past years, we have seven mandatory practices per week as well as two mandatory lift sessions, but we have really increased the amount of yardage we’re doing at each prac­tice, as well as the number of challenge sets each week. I think we’ve done a really great job of raising our standards this season and hold­ing each other accountable.”

Both teams know that winning competitions and training hard are not the only things that create a strong, cohesive team. Creating a pos­itive team dynamic is something particularly valued by athletes. For many, their sports teams becomes their family and their home away from home. However, this close-knit environ­ment only comes with significant hard work and sacrifice. The swim teams have certainly been putting in the effort both in and out of the water, as their teams specifically seem to fos­ter a very warm, nurturing team atmosphere. With eight freshman on the women’s side and five new freshmen on the men’s team, making everyone feel welcome and like an equally im­portant teammate can be challenging. Junior Julia Wieczorek discussed getting to know the new freshmen, “I’m always excited to meet new team members (basically new family mem­bers), and this year we’ve had so many new­comers. I can’t wait to do team bonding and to get to know further this big and wonderful group of people. I’m excited to see what we can accomplish together. To me, swimming isn’t just an individual sport, it’s a team sport.”

Even before the official start of their com­petitive seasons, the teams have already done several bonding activities together such as a team hike, a swim-a-thon fundraiser and their alumnae/i meet. Schwab spoke of their recent alumnae/i meet, “It’s always a great reminder every year of the great bonds you make with your teammates that will last well beyond graduation. I have so many memories with my teammates, and I honestly just can’t wait to see what this year brings.”

The team’s fun, yet determined demeanor is very helpful when it comes to helping the freshmen assimilate into the collegiate atmo­sphere. Newly hired Diving Coach Jack Ferriter explained, “The team is full of vim and vigor. They readily accept challenges that I toss out and more often than not exceed my expecta­tions. My first year divers definitely had a bit of an eye opening when they discovered what it meant to be on a collegiate team, but fortu­nately the upperclassmen have been incredi­bly helpful in terms of lending out advice and being able to commiserate with what the new guys are going through. From what I can gather, everyone is getting along beautifully and as a coach that makes me incredibly happy.” On the more competitive side of things, junior captain Julia Cunningham (full disclosure Julia Cun­ningham is the Features Editor for the Miscel­lany News) spoke about the team’s talent, “This is the fastest roster we’ve had yet. Not only will our incoming freshmen bring a lot of new tal­ent, but our returning swimmers are already putting up times at practice that are faster than they swam midway thru the season last year. Over October break we’ve already been swim­ming as many yards as we were swimming on training trip last year. We are looking forward to surprising other teams with some fast swim­ming!”

With such strong team foundations, the teams are ready for competition. Schwab spoke about the unique efforts made to carry over the momentum from last season, “We had a great finish to our season last year, and I think in or­der to keep the momentum going, we worked very hard over the summer not only to stay in communication with each other, but also to re­ally put consistent training in both in and out of the pool. We actually had a little inter-squad competition throughout the summer, where we broke into four small teams to see who could train for the greatest number of hours. I think this made us very prepared for the season.” Senior captain Anna Kuo furthered, “We don’t need to so much ‘improve,’ but rather just keep the momentum moving forward, keep every­one pumped and ready to race.” Perhaps Coach Ferriter explained it best, “Some of our squad goals are dope group photos, dropping the hot­test mixtape of 2016 and of course putting the team on our back. In all seriousness however, I believe our group goals is to become a strong presence in the Liberty League and to con­stantly better ourselves on and off the board. I have been coaching since 2011, and I would say my favorite part about coaching is watch­ing students come up with a goal and then ac­complishing said goal. I also really enjoy em­barrassing my divers, can you say high waisted gym shorts?”