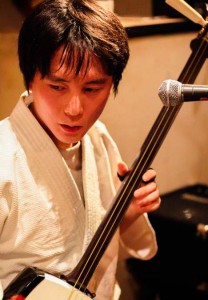 The guitar has been around for a while and violins get their fair share of orchestral pieces, but rarely do most traditional instru­ments get the spotlight they de­serve.

On Nov. 5, at 5:30 p.m. in the Vil­lard Room, Oyama Kozan, a tsuga­ru-jamisen master, together with his wife, Rumi Shishido, will give a shamisen and koto performance, providing information about these instruments with a question and answer session as well.

Having started in the early 19th century, Tsugaru-jamisen is a tra­ditional Japanese genre originating from Northern Japan. The main in­strument used in tsugaru-jamisen music is the shamisen, a three-stringed instrument similar to the ukulele, but the process of playing the shamisen is much slower and more meticulous.

Jewett House President Kohei Joshi ’18, who is from Kobe, Ja­pan, talked about how he’s come into contact with the shamisen in the past, “A lot of Soba shops have shamisen music playing in the background for a very peaceful en­vironment. It gives me the feeling like time has slowed down. I have positive feelings about the sham­isen. It’s very unique.”

The organizer of this event, Professor Hi­romi Tsuchiya Dollase, explained how this event came about: “The reason we chose this shamisen performer is because I have been taking Skype lessons from him. He lives in Shinjuku, Tokyo, and he has his stu­dio. When I went back to Japan this sum­mer, I actually met him for the first time in person and took a lesson from him. So this is how we invited him.”

Besides performing in the Villard Room, Kozan will be giving a lecture for Adjunct Assistant Professor of Music Justin Patch’s Introduction to World Music class on Wednesday.

In describing how helpful Kozan can be for the class, Patch commented, “He will demonstrate both the koto and the sham­isen. We are currently doing a unit on Jap­anese art musics, such as Gagaku, Hogaku, Noh, and Bunraku, so this fits very well. The theme of the course is ‘Music and Cir­culation’, so the shamisen and koto, both originally brought to Japan from China, but adapted for uniquely Japanese aesthetics and contexts, is perfect.”

Patch’s class frequently has guest speak­ers, allowing for a much more enriching experience for the topics, Kozan being sim­ilar. “In some cases it’s important for the students to see musicians perform in spe­cific genres so that they can do more than watch a video and listen to a recording,” said Patch. “It livens classroom experience and also gives the students a chance to re­late to performers o a personal level. They often talk about their own pedagogical pro­cess, their teachers and inspiration, which makes music more meaningful than just lis­tening.”

Kozan’s performances will enrich stu­dents, providing many with an introduction to a musical world that is unfamiliar. Joshi, although from Japan, mentioned that he is not too familiar with the koto or the sham­isen, save his encounters in Soba shops. With the influx of Western culture in Japan, there is less of a presence of instruments like kabuki and bunraku. But still, the sham­isen remains an important instrument in the contemporary Japanese society.

The koto, which Kozan and his wife will also play, is a much older instrument from the 16th Century and is considered the na­tional instrument of Japan. With 13 strings and a movable bridge on a board, it was originally used as court music and, even though its popularity has diminished in re­cent centuries, the koto can still be found today in Japan in their jazz and pop music. David Bowie, The Rolling Stones and Dr. Dre have used the koto in some of their mu­sic as well.

While the koto might be older, the signif­icance of it still holds true. Patch admired, “The koto is a classical instrument. There are composers that are integrating it into more modern settings and composing new works for it.”

He continued, “But more importantly, it has been a part of Japanese culture for cen­turies, it holds a particular history, and also tells a history of adaptation, colonization, religion, economy and nationalism as well as a particular women’s history that are all important. Not to mention that it is a beau­tiful instrument, and there should always be space and time to simply enjoy and pre­serve beauty and that which is aesthetically pleasing as it is.”

Kozan’s visit to campus is all a part of a series of Chinese and Japanese Culture events that will be happening that Friday. While Dollase originally wanted to have Kozan perform as a part of that, the Dean’s Office advised her to alter the performance to be on Thursday instead, acting as a pre­cursor to the next day’s activities.

Getting Kozan to perform at Vassar is a very rare and special opportunity, since there are very few tsugaru-jamisen per­formers on the East Coast. Kozan, who currently lives in Shinjuku, Japan, is also a director for the Institute for Japanese Tra­ditional Culture Experience and Education and majored in the koto at the Sakuyou Mu­sical Junior College.

Learning the koto from Hikaru Sawai, the world-renowned Japanese performer and composer, Kozan studied both the classical form in playing the instrument as well as innovative collaborations with new genres. Even though he will not be performing it, Kozan has also been trained to play the san­shin, which is the precursor to the sham­isen.

On the importance of Kozan’s visit to Vassar, Patch said, “Having Mr. Kozan at Vassar is important because it shows the living world of art that exists around the world. When we teach global art, we tend to teach it as a snapshot, something with a fixed set of meaning, codes and purposes. Much of this has to do with time constraints and limits. Having Mr. Kozan visit gives our students the opportunity to experience liv­ing art, similar to having a recital of Beetho­ven’s piano sonatas or Mozart’s string quar­tets. They show that music is a constantly living tradition that is both adaptive and classical.”

Moreover, the objective of the perfor­mance is twofold. According to Dollase, “The goal is to first of all entertain Vassar students. And also teach about the Japanese musical instrument. They sometimes play Western music with the shamisen so I think there’s a lot of potential and it’s really ex­citing. It’s not just about playing old tradi­tional music but they are capable of playing something new. This combination of old and new is why it’s kind of exciting to learn about this instrument.”

As someone who plans to attend the per­formance, Joshi much cherishes the oppor­tunity to experience traditional Japanese music. He concluded, “You don’t really get to hear traditional instruments from any culture, let alone the shamisen, even in Ja­pan. I’d say it’s a privilege, an honor to hear it.”