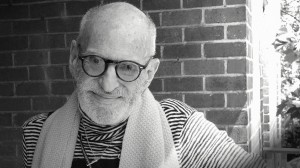 Think of New York City in the early ’80s. Imagine how violent the HIV-AIDS crisis swept across its gay community, inciting pan­ic in the medical world, along with suspicion and fear within this population. Imagine your beloved someone passed away in your arms, when all his wishes remained unfinished. The magnitude of this crisis is conveyed in “The Normal Heart” (2014), a television film based on the screenplay by Larry Kramer. “The Normal Heart” is merely one among many of Kramer’s works that blend togeth­er the theme of social consciousness and his artistic vision. An award-winning playwright, screenwriter and author, Kramer visited Vas­sar College on Oct. 28 and gave a lecture on his latest book, “The American People,” an­other work under this consistent theme.

Besides “The Normal Heart,” which is both a play and was later transformed into a TV screenplay, “Just Say No, A Play about a Farce” (1988), “The Furniture of Home” (1989) and “The Destiny of Me” (1992) are some other works by Kramer. Given his ex­perience as a playwright, his visit came as relevant to students in the Drama Depart­ment and student theater. Chair of the Drama Department Professor Denise Walen, noted, “Larry Kramer is an award-winning play­wright and screenwriter. He’s the author of controversial, best-selling novels, and a tire­less advocate of gay rights.”

Walen continued, “We were thrilled to have the opportunity to invite him to campus. Larry Kramer’s visit will benefit the Vassar community by providing the opportunity to talk with and learn directly from a pioneer in gay rights and will increase the community’s knowledge of LGBTQ history.”

According to Walen, Kramer is also an ex­ceptional writer. He has written plays, novels, essays, newspaper articles and screenplays. His work has received Tony, Emmy and Obie awards and he’s also been nominated for the Academy Award and the Pulitzer Prize. “Stu­dents interested in writing will have the op­portunity to talk with him about the writing process and writing effectively in many dif­ferent genres,” Walen encouraged.

Regarding Kramer’s activism, this lecture could provoke activists’ dialogs on cam­pus in several ways. Director of the LGBTQ Center Judy Jarvis said, “I and the Campus Life LGBTQ Center were interested in work­ing with the Drama Department, American Studies, Office of Health Education and the Office of the President to bring Larry Kram­er to campus because he is multi-faceted and controversial. His career has included playwriting, fiction-writing, lesbian and gay rights advocacy, LGBTQ health advocacy, and probably more. I think his longevity in activ­ism and his penchant for saying whatever he really feels is often thought-provoking, even when you disagree, and can catalyze conver­sations and debates within our own LGBTQ community.”

Focusing on how this lecture could serve the LGBTQ community, Jarvis continued, “I believe that having Larry Kramer will serve the campus in helping us learn and think more about LGBTQ history in this country, espe­cially the history of HIV/AIDS activism and what the connections are today to LGBTQ health disparities. Kramer is one piece of the multi-racial, multi-gender LGBTQ rights movements, and I hope people will listen to his thoughts and reflections about activism, as well as educate themselves about other important LGBTQ activists of Kramer’s era, many of whom are no longer living, such as Sylvia Rivera and Marsha P. Johnson.”

The event was open to the campus com­munity and the public. Held in the Martel Theater, Larry Kramer delivered his speech at 5:30, followed by a Q&A. He then moved out to the lobby to sign copies of his new book, “The American People.” The bookstore was on hand to sell copies of the book.

Sharing on her personal connection with Kramer and his works, Walen said, “I’ve known about Larry Kramer and his work as a playwright and activist for a very long time. His play, “The Normal Heart” was first pro­duced in 1985 and as a graduate student in theater, I and my peers were thrilled to see a play that spoke so powerfully about current events. We were also intrigued about the way he used performance techniques in the orga­nization ACT UP. He was a theater person who had a strong social message and was un­apologetic about being gay when it was still difficult and sometime dangerous to be out.”

Kramer’s works, especially The Normal Heart with its adaptation into the 2014 televi­sion film, capture not only Walen’s attention, but also that of Adjunct Instructor in Film, Joseph Muszynski. Muszynski noted, “I have seen both The Normal Heart and Women in Love. And I have read much about (and a lit­tle by) Larry Kramer in the media over the years. A film like ‘The Normal Heart’ is spe­cial to me because in addition to being about a specific issue, it is also an exploration of so much more—the mechanisms and resistanc­es to social change, both within and without ourselves; the balance between personal struggles and public battles; and of course the challenges of maintaining our humanity and love for one another in a world seeming­ly filled with hate.”

Commenting further on the marriage be­tween activism and art in Kramer’s works, Muszynski continued, “Sometimes an artist’s social activism can look like a clunky acces­sory to their artistic life, but for Larry Kram­er the two seem so intimately intertwined that it is hard to imagine the one without the other. It is fascinating and inspiring to watch how each has continued to influence and en­rich the other over the decades of his tire­less work. And yet, his writing always speaks for itself—always provocative, universal, and unrelenting in its pursuit to foreground and repair the ties that bind us all together.”

Kramer’s new book, “The American Peo­ple,” has received a number of reviews in the media. Dwight Garner wrote on The New York Times, “There is a method, of sorts, to Mr. Kramer’s madness. He combines these stories with those of unknowns, fictional men of no special importance, some of whose tales are moving. Under this novel’s busy sur­faces, the author is saying something quite specific: That gay men have always been with us, long before homosexuality had a name, and it is past time we extend to these men our historical sympathy and imagination.”