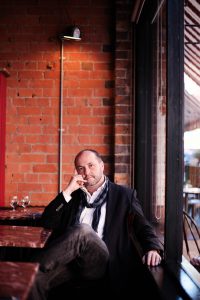 “The world spins. We stumble on. It is enough,” wrote Colum McCann in his most recent novel “Let the Great World Spin.”

The college has sought the honor of having well-acclaimed international author Colum McCann deliver the William Gifford Lecture next week in which McCann will read from his novel “Let the Great World Spin.”

The Gifford Lecture serves as a potential source of knowledge and inspiration to not only students but also the general public; it provides a forum for a multi-talented artist like McCann to reach a diverse crowd. Professor of English, Amitava Kumar wrote, “Apart from being a major, prize-winning novelist, Colum McCann is also a distinguished teacher. He is a professor of creative writing at Hunter Col­lege alongside fellow novelists Peter Carey and Claire Messud and he has taught and inspired several young writers. We would like our own students at Vassar, especially our creative writ­ing students, to learn from him.”

The premise “Let the Great World Spin,” which won the 2009 National Book Award, re­volves around the quotidian corners of New York City on the day French artist Philippe Petit tightropes between the two Twin Towers during the summer of 1974. McCann’s website reads, “Elegantly weaving together these and other seemingly disparate lives, McCann’s powerful novel comes alive in the unforgetta­ble voices of the city’s people, unexpectedly drawn together by hope, beauty, and the tight­rope walker’s ‘artistic crime of the century.’”

Many students are gearing up for the highly anticipated lecture. Borgne Raasch ’18 is a fan of his work. She explained, “Colum McCann is such a fantastic writer and it’s really exciting that he’ll be on campus for this lecture. Though I haven’t been able to buy any of his novels (which I hope to change soon), I’ve found the short stories of his incredibly intriguing. I’m definitely interested in attending the lecture and the dinner in order to hear his insight about writing and how he finds inspiration from the world around and within him.”

Clivia Wang ’16 echoed Raasch’s excitement. “It’s always exciting when a renowned author comes to Vassar to deliver his or her works,” she said. “This time, as we welcome Colum McCann and his National Book Award winner Let the Great World Spin, we are reminded of the great human resilience that happened during 9/11, a central theme in the book. His choice with putting 11 protagonists in the book constructs a mirroring space, not different from that of Tropics of Orange by Karen Tei Yamashita.”

The lecture falls at an exciting time for “Let the Great World Spin”–J.J. Abrams, director and creator of television series Lost, bought film rights for a film adaptation of the novel. McCann and Abrams are currently in the pro­cess of creating a screenplay. The topic might already seem familiar–Joseph Gordon-Levitt recently starred in a film based on the same story. Thus, McCann’s work will be a point of contrast for this timely story.

But, this is not McCann’s first professional encounter with the film industry. His novel, “Everything in this Country Must,” was direct­ed by Gary McKendry and nominated for an Academy Award Oscar in 2005.

McCann carries an international presence that began with his birth in 1965 in Dublin, Ire­land. He started his career as a journalist for The Irish Press. In the 1980s, McCann shortly served as a wilderness guide for juvenile delin­quents in Texas. He and his wife Allison then lived in Japan for eighteen months. They now live in New York City with their three children.

McCann’s visit has been made possible by the faculty and students of the Department of English and the William Gifford Fund. Kumar explained some of the history and significance behind this prestigious fund. He wrote, “Bill Gifford was a popular professor of English at Vassar. He taught here for four decades. Upon his retirement, his students established a fund in his name to bring distinguished writers to campus.” McCann joins past recipients that include notable authors Jeffrey Eugenides and Jonathan Franzen.

The Colum McCann Gifford Lecture will take place on Wednesday, Nov. 4 at 6 p.m. in Taylor Hall, Room 102. Following the lecture, there will be question and answer session and book signing with McCann himself. The event is free and open to the public.

Students and faculty members alike express anticipatory sentiments towards the event. Ku­mar wrote, “Colum McCann is one of the lead­ing lights in literature. Among his books is the novel Let the Great World Spin which won the National Book Award in 2009. It was a huge, international bestseller. McCann’s other books have also won honors. We are lucky to have him as our Gifford lecturer.”