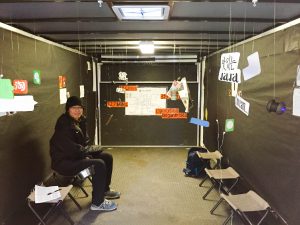 Standing inside a rectangular space that re­sembles a subway cabin, Ben Rothman ’18 carefully listened to a multiplicity of sounds coming out of the 10 amplifiers. The noises of passing trains, conversations in various lan­guages, broadcast notifications, books flipping and dialogs from TV dramas came together to recreate the acoustic experience of a subway car.

This week, the Creative Arts Across Disci­pline project, A(n Underground) Tale of Two Cities, turned the Collaboratory into the con­necting point of Beijing and New York City. Inside the familiar retrofitted trailer, now on the lawn in front of Rocky, recordings taken at the subway stations of the two metropolitans are installed, together with visual hints such as subway maps, local newspapers and pop cul­ture items. As one member of the project team, Sixing Xu ’18 described, “Through such a recre­ation [of a subway experience] in a small trailer space, what we hear—sounds that are too loud or too common to raise our attention, or sounds that hide themselves in headphones so we can hardly notice—is amplified and concentrated, and the seemingly dull everydayness of a sub­way ride comes into life.”

Many found their way into the exhibition through sounds. “I heard sounds and came in­side,” said Rothman, “And I got conversing with Yibo, who told me the similarities and differ­ences between Beijing culture and NYC, where I grew up…”

Through the immediate representation of a subway cabin, Xu sought to encapsulate the var­ious sides of life in the two cities. The idea came from her experiences of subways in both Bei­jing and New York City. “[In the subway] there exists another world, a miniature of the world we dwell, and in such a world I become sensi­tive enough to think about ‘us’—the passengers, the cabins, the trains, the city above,” she wrote in an emailed statement, “It is through these sounds, images, motions, temperatures and ev­ery tiny thing we share in a small cabin that I feel so connected with all the strangers around me, that the city we all live in become so alive.”

After she left China for college last fall, she became increasingly familiar with the New York subway. Xu commented, “It surprises, but also fascinates me to find out how different the ‘ecosystem’ New York subway presents is from the one of Beijing subway. And that contrast convinces me that subway is indeed a self-por­trait of a city, and a portrait of a subway—a sen­sory replica of a subway—can also epitomize the city.” With this belief, she decided to share her reflections through a sound installation project.

Xu then approached Yibo Yu ’18 and Shiqi Lin ’17 to work on the project together. She elabo­rated, “We’ve all been living in Beijing for a long time, and Beijing subway connects us: it’s interesting to think that there might have been one morning when all three of us are riding on a same subway, but what we see, hear, and feel varies.”

She continued, “Then we moved to the US and became familiar with the New York subway. While we jokingly complain about how ‘shab­by’ New York subway is, we are unconsciously comparing to Beijing subway. In doing so, we are in fact comparing and connecting a collec­tive reflection of people’s ways of living. Our mutual connection with Beijing and New York, and our interest in juxtaposing and comparing lives in two metropolises through sounds and images bring us together as a team.”

During this past summer, the team of three started recording. Mostly responsible for sound editing and recording technologies, Yu said, “The biggest difficulty was that there was just too much noise. It was hard to actually record what was going on.” This technical obstacle led to the group’s decision to recreate subway sounds by themselves and record these simu­lated scenes.

Xu explained, “People are wearing ear­phones, so we will provide earphones for our audience. Words spoken by different people, in different dialects and even different languages twine together and become indistinct, so we will re-present those mumbling conversations in our space.” To do this, the members asked their friends to record casual conversations in languages including Spanish, Cantonese and Korean.

Changes were also being made during the set-up process. “We initially wanted to have two separate spaces representing Beijing and NYC respectively. But we later realized that juxtaposing the two distinct experiences might create an more interesting effect. Shiqi brought up a really good point that the middle point of two extremes—the U.S. city NYC and the Chi­nese city Beijing—is simultaneously the most vulnerable and the most powerful. We wanted to present that expressive moment by putting up the recordings in NYC and Beijing side by side,” Yu recounted.

The group also introduced interactive ele­ments to their installation. “We will be playing soundtracks of different elements from inde­pendent amplifiers. The audience can decide to turn some of them on or off and listen to vari­ous combinations. It adds a sense of playfulness to the experience,” said Yu.

Xu added, “This brings in unexpectedness and randomness to our project, but that in fact makes our subway ride closer to the ones we experience in real world.”

With this interactive, auditory representa­tion of the two cities’ subway, the group wanted to divert people’s attention from the apparent visuals to the subtle acoustics. Lin elaborated, “We are keen about showing people these two dynamic and multicultural underground eco­systems through sound. We noticed that when people took the subway, their attention was normally focused on what they see, rather than what they hear, or they simply don’t pay atten­tion to these things.”

The project also explored comparisons across boarders. Lin commented, “open up a little space on Vassar campus of listen­ing to cultures globally and imagining about cross-cultural dialogue. You know, on New York subways, people talk in different languages but no one knows what the others are talking about in other languages. We hope to break this wall of ‘mystery,’ ‘curiosity’ or ‘incomprehension.’”

But ultimately, the project allows both its creators and audience to better understand the contemporary urban experiences. Xu stated, “It’s still providing new perspectives to the un­derstanding of urban life to us, and we hope it can bring more to our visitors, and remain open to all kinds of interpretations.”

She concluded, “We want to make our ‘pas­sengers’ aware of these sounds, and let the sounds themselves tell about lives in the two cities.”