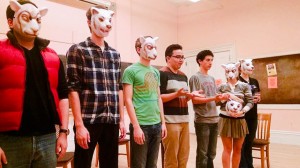 We’ve all seen it. That scene. The one with the girl running—usually away from a killer or creature. It’s pretty standard in horror movies, from the classics to modern hits. These scenes inspired Sam Rebelein ’16 to write his play, The Drunk and the Elephant which premieres Friday, Nov., 6, in the Shiva. “I’m a huge fan of horror movies,” he explained in an emailed statement. “Over winter break this January, I was working my way through all the Friday the 13th films. At some point in the third film, there’s this hippie couple who KNOW they’re in a place (Camp Crystal Lake) with a deadly history, they KNOW the killer is on the loose, they KNOW creepy things have been happening all day—and yet they STILL choose to split up. The hippie dude goes alone into the barn and, of course, is killed.”

This lack of reasoning made Rebelein won­der. He explained, “I just thought, Why? Why do you ignore all the signs so stubbornly? What’s the psychology behind that? So the play started as a sketch of a guy who is hyper-aware he’s in a Friday the 13th and nobody believes him. So it all started with just a dude in his liv­ing room, freaking out, trying not to die, and desperately trying to get his level-headed wife to panic with him (she won’t). “

This dude is Richard, an eccentric English teacher who may or may not be in mortal dan­ger. “[He] loves horror movies so much that it’s begun to affect the way he sees the real world. It also heavily affects his relationship with his wife, Tabitha, who has to find ways to cope with his dangerous obsession,” explained Rebelein.

He came up with the idea for the play last January but it wasn’t until months later that he started writing. “I had bits and pieces written here and there (scene endings, certain lines, pieces of movement) but I had no idea how they connected or what they meant yet,” ex­plained Rebelein.

As a horror play, the show joins only a few others of its kind. “The play is in parts a com­mentary on horror movies and the way we view films in general, and at other times, it slips into the guise of a cliché slasher flick. Think Cab­in in the Woods and Scream combined,” ex­plained Rebelein.

He continued, “My writing process was kind of all over the place for this piece…I began with the ending, which felt like the easiest jump­ing-off point (because I always knew how it would end).”

Translating his ideas onto paper was tricky for Rebelein. He explained, “When it’s all in your head, it gets confusing trying to transfer it to the page.” But according to Rebelein, see­ing the final result come to life has made up for any of these difficulties. “Seeing the play come to life has been nothing short of a dream come true…a lot of our rehearsals feel more like goof­ing around, reading lines and ironing out block, than like actual work. And every time some­thing happens that is one of those bits or piec­es I had on my back burner for a few months, I still get chills.”

Rachel Messbauer ’16, who plays Tabitha, explained, “It’s fun for me to play a character who is so calculatedly unfazed by the uncan­ny things happening around her — Tabby can keep calm in situations that I’d be cowering in!” Messbauer is glad to be working on such a new, original piece and is grateful to have Rebelein on hand. She explained, “It’s a little refreshing to have a living, breathing author in the room! I love being able to discuss my thoughts about the character with the creator of that charac­ter.”

Kevin Johnson ’19 agrees. “Having the writ­er immediately at hand is wonderful because it provides insights into the work that are nev­er wrong…[it] feels like I am connected with a work, as opposed to just revisiting the play­wrights of yesteryear,” he said. Johnson plays Kirke in the show. He continued, “Kirke is a spooky one. He is a presence for certain,” he explained. “There is an forceful energy that defines him and keeps his intentions hidden.”

Carinn Candelaria ’18 plays Vicky in the production. She explained, “Vicky is an AP student. She is totally blank. She’s the lady in every horror film who has an early exit because she isn’t interesting enough of a character to keep around.” Candelaria loves the exaggerated nature of her character. “I get to have a lot of fun with her. I get to play her up because she is just a caricature of who I was/ am?” she said.

Unlike many of the horror movies before him, Rebelein hopes to do more than just scare on opening night. “I hope it really knocks peo­ple’s socks off. I hope that we get an audience filled with people who think they know what they’re about to get—and then get the complete opposite. If people leave the theater with any kind of feeling like, ‘Damn, I did not see that coming. That was intense. I can’t believe…,’ I’d be pretty happy,” he said.