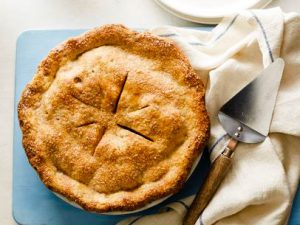 I’m not going to lie. I’m no baker. I love eating baked goods, I just don’t have the patience for getting everything ready. I mean, what is “pre­heating?” It literally takes longer to preheat than it does to make the actual food. That fact really gets me a lot more upset than it should. But I’m sitting in my suite looking at our two giant bags of apples and thinking about how we’ve been talking about making apple pie since before October Break, and deciding that I’m going to start some research on this instead of doing the research I should be do­ing for class.

Everything about fall basically boils down to pumpkin spice and apple picking. Which so far our suite has done. Twice. The first time we went apple picking, we came back with enough apples to feed an army. We went through the majority of those maybe a little faster than we should have, but an apple a day keeps the doctor away, right?

Actually, we all came back after October Break sick, so that theory is most likely incorrect. Then we went apple picking again, because why not? Now we’re back where we started with more ap­ples than what we know what to do with. So let’s make pie.

Of course, who has time to make apple pie? But looking at the pictures that come with all the rec­ipes is close enough to the real thing. That, and eating the freezing cold apple pie from the Deece. The first recipe I found was from Pillsbury so of course they wanted me to use their Pillsbury Pie Crust. If we’re making pie, though, let’s go all out and make our own crust!

Then it hit me. If I really want to find a time-consumer, I should look up some vegan recipes. I am legitimately concerned for my veg­an friends and their lack of desserts. I ended up finding a Food Network recipe that looked pretty manageable. The only “special equipment” re­quired was a nine and a half inch deep-dish pie pan.

Full disclosure: the following recipe is from the Food Network, which claims this will serve eight to 10 people and has an “intermediate” baking level. Which probably means it will serve four to five people and be an “extremely difficult almost impossible” baking level.

The directions are pretty straightforward.

For the dough, you put the flour, sugar, vine­gar and 1/2 teaspoon salt in a food processor, and pulse to combine. Add the coconut oil in small spoonfuls and pulse until the largest pieces are pea-sizes. Add eight tablespoons ice water and pulse until evenly combined. Divide the dough between two large pieces of plastic wrap, pat each into a 1/2-inch thick discs and chill for at least one hour up to overnight.

Meanwhile, peel and core the apples; cut into 1/2-inch-thick slices. Toss with the sugar and lem­on juice in a large bowl. Melt the coconut oil in a large skillet over medium-high heat. Add the apples and cook, stirring occasionally, until the firmer apples soften but hold their shape, about 12 minutes. Add the flour, cinnamon and 1/4 tea­spoon salt, and stir to combine. Remove from the heat and let cool completely.

Finally, we assemble. To make rolling easier, let the dough soften a bit. It should be slightly soft when pressed at room temperature (this may take anywhere from 20 to 40 minutes depending on the temperature of your kitchen). Roll one disc of dough out into a 13-inch round on a lightly floured surface or between two pieces of floured parch­ment or wax paper. If the dough gets too warm, refrigerate it to firm it up. Ease the crust into a 9 1/2-inch deep-dish pie pan. Add the cooled filling, mounding it slightly in the center.

Roll out the remaining dough disc into a 12- inch round; place it over the filling, and press the two crusts together around the edges. Fold the overhanging dough under itself, and crimp as de­sired. Brush the top and edges with the almond milk and sprinkle generously with sugar. Pierce the top with a knife (or make decorative cutouts) a few times to let steam escape. Chill for one hour.

Position an oven rack in the lowest position in the oven, place a baking sheet on the rack and preheat to 425 degrees F; preheat for at least 30 minutes. Place the pie on the hot baking sheet and lower the oven to 375 degrees F. Bake until the pie is golden and the filling is bubbly, one hour to one hour 20 minutes, rotating as needed. Cover the edges with foil if they brown too quickly. Transfer to a rack and cool until set, about three hours.