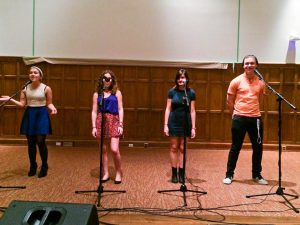 “What good is sitting alone in your room when you can come hear the music play? Life is a cabaret old chum, so come to the cabaret,” to quote from the musical “Cabaret.”

On Saturday, Oct. 24 at 7 p.m. in UpC, Future Waitstaff of America (FWA) presented their semi-annual cabaret, ‘FWAnatomy – The Stu­dent Body.’ The show was directed by Gileann Tan ’17 and Danny Young ’17 and stage managed by Megan Forster ’17, with Conor Chinitz ’18 on keyboard. With 18 different songs spaced out over an hour, it was a delightful event that showcased many wonderful voices singing songs both old and new.

Every semester, FWA, Vassar’s musical the­atre student group, founded in the fall of 2005, organizes a very casual cabaret to fundraise for the shows and special events later in the sea­son, selling tickets for $3 during the week and $5 at the door.

FWA are the only theater group to put on musicals exclusively, doing shows in the past such as “Assassins,” “Little Shop of Horrors” and “The 25th Annual Putnam County Spelling Bee.” The organization consists of actors, di­rectors, stage managers, tech people and many more positions dedicated to working on pro­ductions..

Loosely inspired by Olivia Newton-John’s hit 1981 single, “Physical,” this cabaret was bodily themed, with songs about hearts, brains, smiles and even muffin tops. Low-key in attitude, the cabaret displayed a very talented group of per­formers. With limited choreography and just a keyboard to join them, the singers put on a wonderful show.

The two directors have both appeared in FWA cabarets in the past, Tan performing in four and Young in three. Last fall, Tan directed while Young was the musical director, a pro­cess that essentially left both co-directing like they did this year.

During these cabarets, some mistakes can be made. Words can be forgotten and notes might not always hit, but for those rare occurrences, the audience is always supportive, cheering and occasionally singing along, creating an overall warm and supportive environment.

Explaining the dynamic of working with Young, Tan remarked, “Danny has gained a lot of the same knowledge, but since our voices are different, he knows some technique that I don’t and vice versa. Because of that,

we are able to work together well; we fill in each other’s blank spaces when it comes to knowledge and ability to demonstrate tech­nique.”

The showcase usually includes previews from the upcoming FWA productions, this cabaret giving a preview from “FKA Heath­ers.” The cast sang a nice version of ‘Under Pressure’ by Queen and David Bowie, all while sporting backpacks. This show is completely devised and will be going up in November. As a special event, “Lemonade,” (FKA ‘Pippin’) did not present a preview, but will also go up in November.

Director of “Lemonade” and performer in the cabaret, Logan Pitts ’17 said about his deci­sion to get involved, “FWA and I go way back, so when they do this, I need to give back. I told myself, ‘I will audition for the cabaret.’ And I did this and I was fortunate enough to get cast.”

Describing how he got involved in FWA, Pitts elaborated, “I am a drama major and my two favorite aspects of drama production are acting and directing. This semester, I wanted an opportunity to direct, and directing a musi­cal is all the more fascinating a facet of theat­rical storytelling. Thus, FWA was the organiza­tion to turn to.”

Describing how they prepared for the caba­ret, Tan said, “The rehearsal process is difficult because of time constraints: most of the re­hearsals took place over 8 days, and most peo­ple only rehearse once or twice. We do our best to give people music that is challenging, wheth­er from a dramatic or musical standpoint, while still being enjoyable for them.”

He added, “Generally, people are very pre­pared for rehearsal, and so we get to really nit­pick their work and dig deep into what they’re doing. It’s an enriching process for the par­ticipants and us. We love seeing how people work and watching them grow in such a short amount of time.”

Reflecting on the experience, Ari Bell ’18, who sang the opening number and part of the finale, commented, “It was a fast and exciting process. It was fun singing with people I’d nev­er sang with before.”

The auditions for FWA’s cabaret were only about a week before October break and were fairly relaxed. Each person prepared 30 sec­onds of a song. There was no need for an ac­companist, as both Tan and Young have nearly perfect pitches, Tan remarked,

“We applied to direct the cabaret this se­mester because we care about providing a performance opportunity for students who are not in shows this semester. The cabaret, while very causal, is a great learning opportunity for any Vassar student to improve their technical vocal and acting skills, collaborate with other students and gain exposure to musical theatre without the prolonged commitment of a show,” Tan said.

He added, “We are passionate about musical theatre and music in general, as well as provid­ing a comfortable space to learn and grow with­out judgment for past experience or ability. We have had a lot of experience directing people of different backgrounds and have loved working with such a dynamic group of students.”