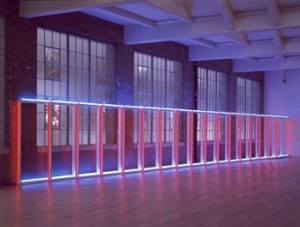 By this time in the semester, things can start to seem a little repetitive. Days are filled with going to the same classrooms, eating the same Deece meals and rewatching the same shows on Netflix. Although Vassar has plen­ty to offer in terms of an artsy distraction, we could always use a day trip off campus to clear our heads and reenergize ourselves as we near the home stretch of the semester.

That’s why it’s time to give the Loeb a break from all of your artsy Instagram shots and try out Dia: Beacon. Located half and hour south of campus, Dia: Beacon is part of Dia Art Foun­dation’s constellation of sites.

This museum opened in 2003 in what used to be an old Nabisco biscuit factory and it now houses a collection of art from the 1960’s to the present. Each gallery is dedicated to a single artist and the museum consistently features special exhibitions, as well as various educa­tion and public programs such as artist lec­tures and conversations.

The current special exhibition is Robert Ir­win’s “Excursus: Homage to the Square”, which is made of 18 interconnected rooms separated by strong transparent fabric called scrim. Be­cause the museum is almost entirely lit by natural light, Irwin had to redesign the entire piece with the intention being for the sculp­tural response to draw its cues, or, reasons for being, from its surroundings. You tend to get lost in the piece because it contains no specif­ic beginning, middle, or end.

Many of the sculptures in Dia: Beacon pro­duce this same effect. The Richard Serra exhib­it contains the sculpture “Torqued Ellipses,” which is made of waterproof steel and stands over thirteen feet tall.

The heavy material is twisted at various an­gles, creating a disorienting feeling as you walk through the art trying to find its center. The walls practically seem to be closing in on you.

Surprisingly, this is not the most unsettling piece in Dia: Beacon.

The bottom level of the building can only be described as creepy, and surely rivals any scary basement at Vassar. The Bruce Nauman exhibit contains the multi-screen projection, “Map­ping the Studio I (Fat Chance John Cage).” This is a single room lit only by the projections on the wall.

The project contains six hours of footage from an infrared camera capturing nocturnal activities of mice, moths and other creatures in Nauman’s studio. The room creates an uncom­fortable, eerie effect for the viewer.

One of the most popular and most photo­graphed exhibits belongs to minimalist artist Dan Flavin. His various pieces are composed almost entirely of light from fluorescent tubes.

Flavin himself states that “his aim is to com­bine traditions of painting and sculpture in ar­chitecture with acts of electric light defining space.”

Although I only got to spend an hour at Dia: Beacon, I could easily have spent an entire day walking through and experiencing the wide ar­range of art. However, the museum is not the only thing the city of Beacon has to offer. Once the “Hat Making Capital of the U.S.,” Beacon experienced an economic downturn during the 1970’s. The opening of Dia: Beacon started a sort of Renaissance for the city, attracting many artistic residents and families.

The city now houses many small businesses and quaint eateries. After Dia: Beacon, which is an $8 admission, you could spend the rest of the day touring the town and shopping at the independently-owned stores. You may even have some time to squeeze in some for study­ing at a coffee shop.

If you’re the creative type, Beacon is overall a different place to escape to feel surrounded by spontaneity and positivity.

As a first year student at Vassar, I’m still not familiar with all the possibilities the Hudson Valley has to offer. So when Noyes House Team offered a house trip to Dia: Beacon, I jumped at the opportunity to explore something off campus.

What surprised me, however, was that many sophomores and juniors said this was also their first time visiting the city of Beacon. Maybe it’s a little too soon for me to be feeling cooped up on campus.

We all agreed, however, that the experience and energy of the town and museum is defi­nitely worth the 30 minute trip. All in all, a day spent at Dia: Beacon is a day (or un día) well spent.