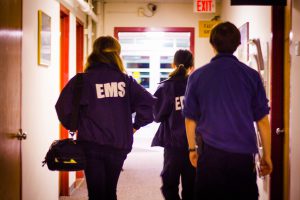 In only a few days, the much-an­ticipated festivities for Halloween will be here, and many students have long since begun getting ready. Ex­cited party-goers are not, however, the only ones making preparations for the coming weekend.

The people tasked with keeping students on campus safe are also readying themselves for what many expect to be a chaotic, high-intensity weekend of drinking and partying. Yet unlike those putting their cos­tumes together now, they are prepar­ing not for a potentially spectacular Halloweekend, but for a potentially dangerous one.

As many students are well aware, Halloween is one of the school’s most famously high-octane party­ing weekends, and accordingly has a reputation for being a time of heavy drinking and drug use. Last year, on Halloween night alone EMS respond­ed to 11 emergency calls, five of which resulted in the hospitalization of a stu­dent involved, numbers that alarmed many. The year before that, however, the statis­tics were not much more encouraging to those who have long been wary of the chaotic events of the weekend, as 12 EMS calls were reported. The year before that, 10 calls were reported.

Numbers like these have alerted many to a recurring issue regarding drinking on campus during Halloweekend, particularly those who would respond to incidents involving intoxi­cation. EMS captain Fiona Chen ’16 noted that much of this comes artificially, merely produced by the reputation Halloween has and the prec­edent many students follow during it. She ex­plained, “I think there is a lot of hype surround­ing Halloweekend. Not only does it involve some of the first all-campus events of the year, it is also widely known as an occasion in which students (over)indulge in alcohol and recre­ational drug use.”

Noyes Student Fellow Sophie Koreto ’18 echoed the sentiment, positing that, in this way, the general acceptance among students of the expectation that Halloween is always hectic and dangerous contributes to the problem. She ex­plained, “Because there’s so much expectation to drink and party heavily on Halloween, it be­comes a self-fulfilling prophecy, especially for freshmen. An effort from House Teams to sell Halloween at Vassar as a fun event, rather than as a crazy and wild night of partying, might help to lower the number of EMS calls.

Chen assured students, however, that this is not the only way they can have fun on campus during this time, and that there are actually many alternatives to the Halloween Night Villard Room party, the epicenter of the weekend’s infa­mously chaotic parties. “I think that it is import­ant that we start to emphasize how easily stu­dents can enjoy the weekend without drinking,” she remarked. “While it would seem that the ma­jority of people celebrate Halloween at Vassar by pregaming and then attending the Halloween party, students also have the option of partaking in alternative activities like the annual 5K, this year’s Haunted House and The Witching Hour.” There will also be a concurrent Safe Space event during the Halloween Party for students looking for a more mellow way to spend their Halloween Night, and Cushing House Team will be holding a scary movie marathon for those who want to spend the night in as well.

In spite of these alternatives, however, most realize that these activities will not do much to distract from the frenzy of the Villard Room par­ty. Director of Safety and Security Arlene Sabo reported that additional security officers will be present, and added precautions will be taken. She wrote in an emailed statement, “[We’re] put­ting extra staff on to walk through houses Hal­loween night. Backpacks and large bags won’t be allowed into the party. If students obtain guest passes before the party and are considerate of those who prefer not to engage, the evening should run smoothly.”

Similarly, EMS has prepared itself for what most predict to be a potentially dangerous night. Chen reported that there will be four EMS crews on call, each with four EMS members, including two New York State Emergency Medical Techni­cians, with support from technicians-in-training and CPR-certified EMS crew members. “This means that we have effectively quadrupled the number of crews on call on a regular night, and therefore we have also increased the number of simultaneous calls we can address,” she noted.

Chen also mentioned that EMS will be em­ploying outside paramedics to assist in po­tentially serious situations. “VCEMS has also hired Mobile Life Support Services, a private ambulance company, to be on standby in case any of our patients require transportation to a local hospital,” she said. “To help Mobile Life navigate our campus, we have also added an ex­tra three-member crew to serve as a liaison be­tween VCEMS and the company’s paramedics.”

House Teams have been planning ahead for the coming weekend with their own prepara­tions. Koreto explained that, in addition to the expectation that student fellows will be available for their fellowees at any point at night, there will be a proactive approach by House Teams to make sure students stay safe, financially sup­ported by the $1,000 allotted by the Dean of the College Office to divide between the houses. “There is an effort from House Teams to put out food in the Dorm MPRs so people will get a chance to eat before going out,” she asserted. “In addition, student fellows are highly encour­aged to remind their fellowees of many of the procedures they learned during orientation con­cerning safely consuming alcohol, how to know if someone has had too much to drink, the EMS phone number and rules of consent, since alco­hol can play a tricky role in hooking up as well.”

The campus is preparing not only to keep students safe, but property as well. Two years ago, Main House incurred heavy damages and vandalism from rowdy students. Toilets were smashed, windows were broken and Main res­idents were faced with the bill. After a poster campaign undertaken last year requesting that students treat the building with the respect it de­serves, Main faced no damage whatsoever. Ac­cording to Main House President Mark Lawson ’18, the same approach will be taken this year, with the hope of achieving the same results. “Let people know, let your friends know that people live in Main,” Lawson urged. “As long as every­thing goes as it did last year, we’ll be fine.”

Similarly, VSA VP for Student Life Chris Brown ’16 explained, “People do a lot on this campus to make sure that students have the safest and best time possible at these events. At some point, students have to take responsibility for their own actions because there’s only a cer­tain amount that these people can do. Students have to be able to respect their spaces and drink responsibly, because they aren’t just putting themselves at risk, but putting others at risk and damaging what we call home. And that’s unac­ceptable.”

It is yet unclear whether the campus has ap­propriately prepared itself for the weekend to come. In the meantime, however, the people on campus responsible for keeping the community safe agree that students can, and must, have fun and be responsible on Halloween.