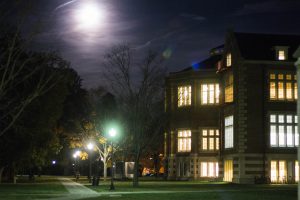 As always, Vassar plans to celebrate Hal­loween in style. Studnets are carefully thinking through costumes, throwing parties and carving pumpkins. This year however, Vassar Traditions is bringing back the age-old tradition of the haunted house with a bang. It will take place this Friday in Rocky through the combined efforts of the Vassar Traditions Committee and house teams from each and ev­ery dorm.

Co chair for the haunted house event Adit Vaddi ’16 explained that the haunted house is not actually a novel idea. “I had experienced the Haunted House in Rocky, during my fresh­man year when Raymond house had done it as a guided tour of one floor. It was a great ex­perience,” He said. “The year after that it was discontinued and last year, Traditions thought to bring it back by combining two very big and fundamental aspects of life at Vassar: The House Team system and Halloween.”

Traditions Committee co-chair Audrey Aller ’17 said, “The Haunted House, for several years, was an event put on by Raymond House Team in the Raymond basement.” She went on, “In 2012 (when this year’s seniors were freshmen), the event was put on in Rocky. In 2013 it was discontinued, and last year in 2014, Traditions (I was not on the Committee at that time) at­tempted to make the event happen again, to no avail.

Though originally a Raymond house team event, the Haunted House has now grown and expanded to include all house teams as well as Vassar Traditions Committee and various com­edy groups around campus. There has been a great deal of planning in advance and a lot of interest shown among the house teams. “House teams are extremely busy with other events, which is a reason that Traditions reached out to them earlier over the summer this year,” said Aller. She added, “Since there was a general ex­pression of interest, and all nine house teams eventually were on board with the event, the event is happening again this year. Two Tradi­tions members have been assigned the event to facilitate its organization.”

The main reason the Haunted House is be­ing brought back this year is to provide enter­tainment and enjoyment for people who don’t want to attend the Villard room Halloween party. “We believe the event has the potential to be a really important part of alternative pro­gramming on Halloweekend. It really embodies the spirit of Halloween that is so characteristic of Vassar, while being distinctly separate from the Villard Room party, which has a significant history of getting out of hand,” Aller said.

While the Vassar Traditions Committee, is enthusiastic about this event, it has also come across a few difficulties.

It is always hard to bring back a tradition the exact same way it was before. “The option of having it in the Raymond basement was ex­plored, but was unfortunately impossible be­cause of fire safety and crowd issues,” Vaddi said. He added, “I believe that it was originally moved from the basement to Rocky because of the house residents’ concerns.” The decision to hold the haunted house in Rocky Hall is a smart one because there are more space available, not to mention more floors for different sections.

Implementing the haunted house is easi­er said than done, and Vassar Traditions and house teams have had a tough time organizing the event. “It’s been pretty extensive process. Three house teams are placed on each floor and they are collaborating with each other to have the rooms and walls decorated according to a certain theme,” Vaddi explained. “There will be a lot of props, make up, light and sound effects,” he added.

Traditions Committee has been more in­volved with the administrative side, handling the funds, publicity material and interactions with Campus Activities Office and SARC of­fice. Other concerns are time constraints and safety issues. “I expect the event to go quite well,” Vaddi said. “My only concern would be accommodating everyone who shows up to see the Haunted House. The event is only for two hours and it a little uncertain as to how many people would actually be able to see it over those two hours because of fire safety and con­straints and general logistics,” He concluded.

The Traditions Committee has high hopes for the haunted house and trusts that the stu­dent body will enjoy this quasi-novel event. Vaddi said, “I think the student body should have a positive reaction to the event. It should be a fun event that students from all years should be able to appreciate, especially the freshmen who would have the chance to see their students fellows and house officers put­ting on a show for them.”

The Vassar Traditions Committee isn’t just looking for this to be a one time event. They have serious plans for the implementation of this in the future, for many years to come.

“We really hope to continue this event in the future as it is, after all, a huge step towards providing more inclusive programming on this campus,” Vaddi said. He added, “In the future, we may expand the event to not only have House Teams participate but other performing organizations to play a role in it as well to make a really large collaboration with a number of different kind of organizations.”

This thought is echoed by Aller. “There are several possibilities for implementing the event in the future, which will most probably depend on the success of the event this year,” She said. “In the future, I would be interested in exploring the option of collaborating with a wider variety of Vassar student organizations in addition to interested house teams. Like all large-scale events of this sort, its future will de­pend on student turnout and general interest in having the event happen.“

While it has been a rocky road to resurrect this haunted house, there is plenty of hope to keep it alive.