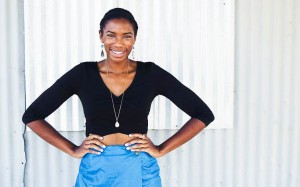 Taylor Mosley ’15 has found her voice even after the job hunt tried to stifle it. In her new blog, What Taylor Likes, Mosley gives viewers a peek into the struggles and thrills that accompany the early phases of adulthood and the transition into post-graduate life. In other words, her day-to-day life.

The blog allows Mosley to connect with all audiences—whether it’s her family members, friends or the typical college student. Mosley said, “My blog is really for anybody who wants to read my thoughts, get my opinion, and see what I like doing or reading.”

“I want my readers, friends, family, admir­ers and followers to peek into my world and see what I am up to and what I like,” Mos­ley shared, “I entitled my blogary (a mix of a blog and diary) as What Taylor Likes because my interest and hobbies cover a vast array of genres. My articles discuss topics ranging from gender normalities to fitness. It all depends on what issues/events are intriguing me the most at that moment.”

Her blog is filled with colorful pictures of herself and of the world she has surrounded herself with, accompanied by short descrip­tions.

Mosley decided to start a blog to fill all of her free time. She said, “Now that I am not in the Vassar clubs and organizations, I need something to keep me busy! Plus, blogging—I think—is a great path towards self discovery.”

Having since moved back to Texas, Mosley explained that her post-grad life hasn’t gone exactly how she imagined. She said, “Initially, I had my heart set on a job that would allow me to leverage the specific skills I obtained as an International Studies major. Thus, I sought out employment that dealt with the government sector, race relations, law and policy.”

Mosley had a hard time finding a job. She looked, but came up short. In desperation, Mosley said, she hired a staffing agency to help her find a job. She said, “In August, the agency helped me book ten, approximately, different interviews. On each occasion the interviewer stated that I was exceptional, performed well and provide all the right answers.” She added, “Even though they supplied me with little crit­icism, I never got the job.”

Despite the struggles invoked by the endless job hunt, Mosley retained her optimism. She stated, “While results matter, it is important to trust the process and see it as a learning op­portunity.”

Mosley warned, however, that life in the pro­fessional world is much harder than life in col­lege. She said, “If you think college was hard, difficult, or soul sucking…you should brace yourself because you are in for a shock! The most challenging class you will ever take is called ‘The Post-Graduate Life’ and if you do not remain optimistic, you will fail.”

Mosley shared what she dubbed the ‘five horrific realities of adulthood’ post-grads in­evitably encounter during the transition from student to adult. Without fail, an ominous sense of uncertainty, a social life enigma, wak­ing up before the sun, commuting and bills will haunt you through the days.

Of an ominous sense of uncertainty, Mosley stated, “I did not have immediate plans to at­tend grad school for employment. Not know­ing where I will be next year, next fall or even next month was scary.” She added, “However, sometimes not knowing is good. It forces you to adapt, network and tap into hidden skill sets you didn’t know you possess.” Mosley conclud­ed by stating, “Even though I have a job now, I am confident but wary about my future.”

The next, Mosley said, is called the social life enigma, which remains a common issue after college. Once the diplomas have been handed out, there are no more Deece dinners, 2 a.m.’s at Bacio’s, 4 a.m. heart to hearts with friends and spontaneous Netflix nights with house mates. Mosley shared, “All this comes to an abrupt halt when you have to wake up at 4, 5 or 6 a.m. for your job the next day. In the real world, you no longer have this thing called a social life.”

Inevitably, the close-knit relationships one forges in college due to proximity and com­mon classes will start to fade. “As my friends and I attempt to move on from our college days, I have found it increasingly difficult to keep in touch.” Mosley said, “We are just too busy—busy trying to deal with our quarter-life crises!”

Mosley added, “Making new friends while working is an unconquerable task because you are either too tired, too busy or too ‘hangry’ (hungry and angry) to even think about forging new relationships with strangers.”

Unfortunately, the omnipresent lack of sleep follows students from college to adulthood. Mosley shared her daily schedule, “Everyday I climb out of my cozy little daybed around 5:30a.m. This leaves ample time to take a speedy 5 minute shower, 10 minutes to get dressed/ pack my work tote/make a to-go coffee and 5 minutes to zoom down to the DART station (the mass transit system in Dallas).” In order to really maximize time, Mosley does her hair and makeup during her 40 minute commute, and changes clothes once she gets to the office.

Commuting, what Mosley calls “the time nibbler”, is a whole new challenge for post-Vas­sar graduates. Gone are the days where every­thing is merely walking distance, or at the very least a short drive away.

Mosley said, “I approximately spend 110 min­utes commuting per day. That may not be a lot for some, but that’s absurd for me! I am used to walking a maximum of fifteen minutes to class, or taking a quick ten minute walk to the local Thai restaurant.” Mosley added, “My commute is a thief! It is quietly stealing, nibbling and wasting my time!”

The last postgraduate challenge, and per­haps the most daunting of them all according to Mosley, is bills, or, the income snatcher. “Before graduating, I happily spent 90% of my discretionary funds on food, clothes, my wine club membership and other miscellaneous ex­penses. Now that I’m emerging into adulthood, I have to budget, pay student loans and buy professional wear instead of athletic,” Mosley said. She added, “While I am happy to be pay­ing for myself, I am sad because I am perpetu­ally broke.”

While the post-graduate life promises strug­gles that no amount of lectures, conference ses­sions and office hours can ever hope to prepare you for, Mosley stated, “Vassar does provide its students with core values that are applicable and useful in the workforce.”

She shared, “Being a person of integrity and morals—a person with grit, passion and desire—all of this I have learned and obtained from my time here [at Vassar]. I accredited this to my professors, the clubs I was apart of and the wonderful people on the Vassar volleyball team. They have taught me so much and I can never thank them enough.”

Mosley shared some words of wisdom to current Vassar students, “At the end you will see that your time at Vassar has changed your life! I honestly don’t know what kind of person I would be if I picked a different school to at­tend.”