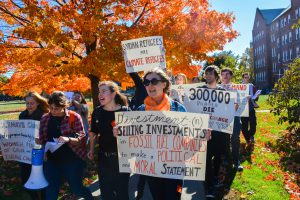 Friday, Oct. 23 was an unusually active day for politics in Poughkeepsie. The students of DivestVC, citizens from around Dutchess County, and across the state gathered to rally around two distinct but linked causes. Envi­ronmental activists filled the Walkway Over the Hudson, ready to speak about climate change and renewable energy despite bit­ter winds from along the waters below. The “Walkway to Paris” event, organized by the New Paltz Climate Action, drew a crowd of over 1,000 people throughout the afternoon, all as eager to discuss climate change as Vassar’s own divesters are known to be.

Meanwhile, DivestVC also held a protest back on Vassar’s campus, timed for the arrival of the Board of Trustees. The divesters, who have been pushing the Administration to pull the College’s financial interests out of the fos­sil fuel industry for years, gathered Friday af­ternoon and approached the Alumnae House, where the Board of Trustees was holding the first of its three annual meetings at the Col­lege. While the Trustees took a break, dem­onstrators took the opportunity to confront them. Students sang, chanted and delivered a speech to petition the Board to heed their call for sustainability. Safety and Security was called when the protesters arrived, but did not interfere with the demonstration.

The students demanded that the Board move forward with last year’s submitted pro­posal, which would have Vassar remove the top 200 fossil fuel companies from its list of investments. Participating members said they thought the rally was very successful, and one of the biggest actions they have taken in the past four years. They hope to meet again with the Trustees in February.

Each year DivestVC holds a rally to pro­test against fossil fuel investments while the Board is visiting, yet so far, the Board has not approved their demands. In their press release regarding the rally, DivestVC claimed, “Trust­ees and administrators have admitted that di­rect fossil fuel divestment, as outlined in the campaign’s proposal, would not significantly harm college finances.”

Some members of DivestVC also attended the rally at the Walkway Over the Hudson, where they were joined by environmentally concerned citizens young and old, includ­ing their peer Divestment group from Marist College, students from Bard College, SUNY-New Paltz and students from Arlington High School. A sign greeted pedestrians that read, “Welcome to the Walkway to Paris–the Mid-Hudson’s response to a call for Global Ac­tion by UN Delegates at the next Climate Sum­mit in Paris in December to prevent a climate catastrophe.”

The goal of the event was to inform lo­cal community members about the reality of global climate change, what they can do in their own neighborhoods and what the Paris Summit means. Sacha Spector from the Scenic Hudson river restoration organization sum­marized, “Climate change is a global problem but its impacts are felt locally. This meeting at Paris is an opportunity for the world’s nations to decide we’re going to avoid the worst im­pacts.”

Stationed at intervals near the center of the bridge were representatives from climate change activist organizations from around the mid-Hudson area. The event also fea­tured several scheduled speakers, including council members, community organizers and non-profit founders. Display boards, photo­graphs, diagrams, posters and banners covered with supporters’ signatures lined the bridge. One such banner, intended as a letter to the President, urged, “Dear President Obama, Our planet is in peril due to climate change. There­fore, we demand that at the UN Summit, we keep 80% of our fossil fuels in the ground and switch to 100% renewables by 2050!”

Rosendale Councilwoman and Co-Direc­tor of Citizens for Local Power Jen Metzger echoed the sentiment in her speech, calling for organized local action to solve the glob­al energy crisis. She praised the progress the State of New York has made in converting to clean energy systems, while also urging the crowd to push for more, citing solar and off­shore wind farms as methods of clean energy that the state should embrace. She said, “We can get the change [we need] in our energy system to happen, but we need to start here, right here in our backyards. We need to start here in New York. We need to create an energy revolution, and I really feel that this is already happening in New York. We have already wit­nessed something incredible, the result of a grassroots movement that swept the state…We have to keep up that momentum.”

Metzger, like many of her contemporaries, emphasized the importance of both communi­ty and statewide action as a means of trans­forming the nation’s energy usage. “The idea is to shift us to a more decentralized energy sys­tem, powered by me, you, our businesses, our communities; powered by us,” she envisioned. Metzger spoke of the state’s “Reforming the Energy Vision” initiative, entreating listeners to keep informed about the decisions such groups make. “We have to make sure that the reform process benefits us, the people, the citi­zens of New York, and benefits a clean, renew­able future,” she urged. “But it’s not just about saying no. It’s easy to say no. The real hard part is actually creating the alternative, creating the clean, renewable energy system that’s going to replace fossil fuels.”

Although Metzger’s rallying cry was met with spirited applause, many still find it dif­ficult to draw connections between climate policy and individual or community wellbe­ing. Pramilla Malick, an organizer in her Or­ange County community and a self-described “alarmist mother,” presented a human face to the argument for distancing communities from fossil fuels. She spoke about the Millennium pipeline, which runs directly through her com­munity and which has had already had adverse effects on the health of her neighbors. “So we have become the sacrifice zone at the altar of our nation’s obsession with fossil fuels. The industry refers to us as host communities, but we’re not hosts, we’re hostages,” she argued. “[C]limate justice is community justice.”

Metzger and Malick, as did many of the speakers and supporters that attended the rally, believe that New York, due to its size and influence, can help to bring about major national reforms. Malick spoke about the ag­ricultural and economical importance of the state of New York, and the immense sway that its citizens have. She reminded, “New York is a vital transportation corridor and market for fracked gas. And in fact, our state is the fifth largest consumer of gas in the country and we seem well into buying even more.”

Similarly, Metzger asserted, “We’re ahead of the game in some ways in New York. There’s some real progress that is being made. It’s im­portant to keep in mind, too, [that] New York is the fourth largest state in terms of popula­tion and the third largest state in terms of GDP, the size of its economy. If we can show that we can create a renewable energy system in New York, you can believe everyone else will follow. Somebody’s got to do it first, and it’s going to be us.”

Volunteers and experts offered up solutions that any citizen can employ to do their part in preventing climate change from their own local communities. Chair of the Conservation Advisory Council, Bard College Sustainability Manager and volunteer for Solarize Northern Dutchess Laurie Husted suggested, “[T]he only way to get people to adopt solar quickly is neighbor to neighbor.” She believes conversion to solar power is a relatively easy way to live sustainably, and hopes to convince people that way to participate. Bard College’s Energy Effi­ciency Coordinator Dan Smith offered advice on insulating homes for winter and changing to LED light bulbs to conserve energy in the home, as students from Arlington High School listened on keenly.

Other speakers were more interested in dis­cussing ideology and the politics surrounding climate change. Marc Pessin of the New Paltz branch of the International Socialist Organiza­tion held a handmade sign that read, “Ask me about eco-socialism.” When asked, he assert­ed, “We believe in system change, not climate change. A capitalist is [only] concerned about short term interests…How much longer do we have before capitalism destroys the world? We believe in socialism from the bottom up…We believe people would vote for a more efficient use of our resources.”

This event was the first of its kind at the Walkway, and many remain hopeful that it will not be the last. The Hudson Valley has a history of environmental consciousness and activism, including the Hudson River Sloop Clearwater, a ship that shares its name with a non-profit grassroots environmental organization begun by the late folk singer and activist Pete Seeger. Seeger was also present at the original opening ceremony of the Walkway, along with fellow musician and activist Victorio Roland Vargas Mousaa, who spoke at Friday’s event.

Mousaa spoke of events that he and Seeger planned that drew millions of supporters. “I just want to say that, that was thought up in a small, tiny apartment, my apartment, which turned out to be the biggest demonstration in Poughkeepsie. This is where it starts from, right here,” he expressed. Later he sang the same Native American song with which he opened the bridge originally, and offered ad­vice on being hopeful about the environmen­tal movement. He reminded the crowd, “You never know what’s going to happen, it’s a seed that grows.”