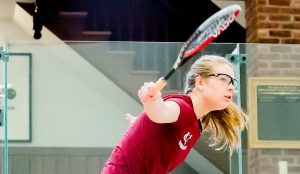 When most students at Vassar think of their school’s squash team, the term “roller coaster” may come to mind as the men’s and wom­en’s squash teams at Vassar have cer­tainly had a tumultuous past few sea­sons. Two years ago, the teams were forced to combine to form a single squad due to a lack of numbers. After “re-splitting” at the start of last sea­son, the men’s team went on to lead a successful campaign that culminated in the school’s first ever national title at the Collegiate Squash Association Team Championships. The women also had a successful season, advanc­ing all the way to the CSA Semifinals before falling. After a few months of training and preparation, the VC men’s and women’s squash seasons have officially taken off.

The women kicked off their sea­son on their home court in Kenyon Hall—meeting Colgate University for their season opener on Oct. 24. They pulled out a hard fought, close win, posting a 5-4 score. The women currently sit in the No. 35 National position and are looking to improve.

Three of the women scored per­fect games—setting the tone as the first three matches proved to be the first three wins of the day—and thereby the season. Sophomore cap­tain and number-one singles player for the Brewers, Hannah Nice, glided 11-3, 11-2, and 11-3 to a win over Col­gate’s number one Freesia Ferranti­no. Last season saw an excellent start for Nice, as she posted a 13-6 record overall, and a 12-2 record in the No. 1 spot. Halfway through last season, she had earned nine wins out of ten– her only loss being a close match that saw her lose in five sets.

Nice enjoyed many more aspects than just her success on the court during her first season, she said (full disclosure Hannah Nice is the assistant social media editor for the Miscellany News), “Last season was really great! As a freshman, I felt re­ally welcomed onto the team by both the men and women. It was exciting to be a part of an all-female team, which was reestablishing itself after the year before, when the women who played were on the men’s roster, due to a lack in numbers. Because of the shift back to two separate teams, we started the season with positive, open minds, but didn’t seem to be expecting much. But we ended up having an awesome season, both on and off the court, as we were com­petitive in our division and formed some really nice friendships with each other.”

The Brewers will be taking a hit this season as their lineup is impact­ed by some key players being abroad Juniors Carly Scher and Isabelle Bertram held the number two and number three slots last sea­son, but will be gone for most of the fall season. Bertram returns in January to bolster the Brew­ers’ line up for the winter, but Scher will be gone all year. Also returning for the second half of the season is former team captain and senior Karina Primelles. Primelles played in the number two spot primarily last year, and had a 6-3 winning record overall.

Two freshmen delivered their first perfor­mance wearing a Vassar jersey—Fiona Agger, who took the number two game 11-4, 11-2, and 11-3 as well as Jia Min Wu who posted three straight sets of 11-4, 11-7 and 11-4. The women will see some tough competition next at the Hudson Valley Invitational Tournament the first week­end in November, which they will host in Ken­yon Hall.

Nice spoke a bit about the rookie members of the team and how they are looking to contribute despite their lack of experience, “We have play­ers who are new to the sport, and it’s awesome to see their improvement from week to week! Getting used to playing competitive matches as a new player can be difficult, but seeing how our first match went this past weekend, and how the new players competitively played and graceful­ly carried themselves, I know they’re up for the challenge.”

Down the road, the Brewers will be facing a five-game stretch away from Vassar. Then they’ll return home to host Connecticut and Haverford Colleges on their home turf in late January for the first competitions post winter recess. The next week, Vassar will host the Hudson Valley Team Tournament—which the women won in 2015.

February will see the Seven Sisters Tourna­ment, hosted once again in Kenyon Hall and Smith, Mount Holyoke and Wellesley College will all visit Vassar that weekend for some lively competition.

The men began their season on the Oct. 24 as well, matching up against the Bard College Rap­tors at Annandale-on-Hudson. Bard was able to pull out a 6-3 victory over the Brewers that day. Junior Vincent Mencotti played the number one spot for the Brewers and won his match up 11- 13, 11-6, 12-10, 11-8—playing a close game against Rhys Nordstrom from Bard. Another win was collected by senior captain Tim Veit, who won 12-10, 11-7, 8-11, 11-8 against Asad Hashmi in the number four spot. Last season Mencotti played all 15 matches from the number one spot and earned a 12-8 winning record (one of two on the team) in his second year with the Brewers.

Last time the Brewers faced Bard was in the Collegiate Squash Association H Division title match last season, which Vassar won 5-4 along with the flight championship—an accomplish­ment achieved by only eight teams in the U.S. in the 2015/16 season. Last season ended on a good note—a championship win and a five game win­ning streak.

Veit remembered it fondly, saying “It’s so hard to pick a favorite memory because there were so many. But if I had to pick one it would have to be winning the H Division Championship cup with such a great team, realizing that after all the hard work we put in, we accomplished something that the Vassar Men’s squash team had never done before.”

Veit continued, regarding last season, saying, “Last season we were very lucky to have a team where most of the starters had been together for at least a year, allowing for an experienced squad with great team chemistry. I credit that to our win at the CSA National Championships last year, where we won our division title for the first time in the program’s history.”

Freshman Andrew Patton posted a perfect match on the day in his debut performance as a Brewer, putting up a 11-2, 11-5, 15-13 win over the number nine player at Bard. Freshman George Platt will also be cracking the lineup–expected to contribute a lot from the number four spot this season.

Next, the men will compete against Siena College on Halloween at home in Kenyon Hall. After hosting Siena, the men will also travel for a five game streak before returning to Poughkeep­sie in January along with the women. During the Seven Sisters Tournament the men will travel to St. Lawrence University to play in the Liberty League Championships. Both teams will round out their regular season in the Boston area in mid-February, facing Northeastern and Tufts Universities in their last conference competition before CSA Championships later that month.

Senior Michael Iselin also has high hopes for the Brewers’ tough schedule, sharing what he thinks will make the team successful this sea­son, “Our greatest strength as a team is definite­ly how we challenge each other to play our best. Whether it is in practice or team lift, there is an understanding that the rest of the team is sup­portive and wanting us to challenge ourselves. In the past, there have been times where we have each been very self-focused. This year, the emphasis is on pushing each other to give 100 percent effort.”

Nice is quite excited about what this year has to offer, saying “The bonds I’ve formed with the teams, both men’s and women’s, have definite­ly added to my time at Vassar. Both teams have created a fun, welcoming environment that gets me excited to go to practice! We’ve been prac­ticing hard five days a week, and we’re hoping all the work we’ve put in will pay off! I’m excit­ed to see everyone improve on their skills and feel more confident with every match they play, win or lose.” Iselin agrees, hoping to cultivate a strong and warm team culture in his final season with the Brewers, saying “I remember how close I was with the seniors on the team when I was a freshman. I really looked up to them and I really started to feel like a part of the team when we came back for winter training before school had started. That was the moment that I felt like I could view them not just as teammates but as friends. I’m hoping the same will be true for this year’s freshmen!”