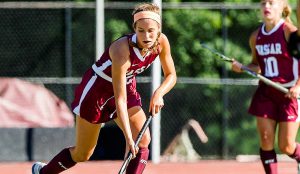 As the days get shorter and colder, seasons wind down and seniors face the reality of their last regular season game at Vassar. The women’s field hockey team felt this reality against Rensselaer Polytechnic Institute last Saturday. The game was tied at 0-0 until se­nior captain Lauren Wiebe lifted the Brewers to a 1-0 lead just before halftime, ultimately securing the victory for Vassar. With the win, the Brewers (10-5 overall, 3-3 Liberty League) clinched a spot in the Liberty League tourna­ment for the third consecutive season while also extending their home winning streak to 16 games. The Brewers have not lost a game on Weinberg Field since their season finale in 2013 against New Paltz.

However, this game was particularly special. Prior to the actual competition, the Brewers honored their three seniors Lauren Wiebe, Ha­ley Merritt and Bianca Zarrella. “Senior days” for sports teams are a Vassar tradition where families, friends and most importantly, team­mates and coaches honor and say goodbye to their senior teammates.

Junior Emma Bracken, who has spent three years with the seniors commented on the their contribution to the team, “The seniors bring an unparalleled sense of passion and spirit to the team that is truly awe-inspiring. They remind us all why we love playing the game and that we do it for each other. Haley, Wiebe, and Bian­ca will leave a lasting legacy for this team. They have been instrumental in making this the most tightly knit and inclusive team that I have ever been a part of. I couldn’t ask for better leaders, teammates, or friends.”

Freshman Molly Youse, who has only spent one season with her senior teammates is al­ready very close with them, “Lauren has so much heart for the game and cares about field hockey and the team so much. Haley always brings a positive attitude and knows how to keep the team spirits up. We can always count on Bianca to work her hardest and never give up on the field. All three of the seniors push the rest of the team to be the best we can be. Whether it’s pumping us up before games or encouraging us at practice, they inspire me to give my everything on the field. They are also leaders. Off the field, they help with commu­nication between the team and the coaches so we are all on the same page. On the field, they connect so well and know exactly where to pass the ball to each other because they’ve been playing together for so long. It helps the rest of the team because we can all work as a unit when we play like they do.”

For Wiebe, the game was especially note­worthy as she scored her eighth goal of the sea­son, her 30th all-time tally, tying her for second on the VC goal scoring list. Wiebe spoke about the outcome of the game, “It was so rewarding! We were just coming off three hard league loss­es, and knew this game would decide whether or not we made it to play-offs.”

Wiebe emphasized how quickly the time has passed and what she will take away from the team, “It’s the ultimate cliché, but you never realize how fast your time on the team is going to go by until you’re at the end. My experience has been no exception; the quickly approach­ing post-season is bittersweet.”

Zarrella had similar sentiments about the results of the game and her time at Vassar, “It felt great to beat RPI, because I knew we would clinch the 4th seed in playoffs, so the idea of continuing the season into league play was ex­citing. Also, it was our senior day, so on a day where we were so appreciated by our team­mates, it felt great to come together as a team and really play for each other.”

Wiebe furthered, “I chose Vassar before I chose being an athlete at Vassar, yet ath­letics have shaped my identity on this cam­pus, through the spectacular role models and friends I’ve made within the athletic communi­ty. I’ve had every bit of the Vassar experience, with the support of a team that has seen me at my best and worst and care that much more for me because of it. I’ve learned that respect must be earned, not demanded. Sports are as much about listening and compassion as they are about athleticism and practice. My educa­tion at Vassar would not have been complete without the lesson I learned on the turf.”

Zarrella furthered, “Some of my best friends are on this team, and playing with them throughout college has been an experience that I will remember. I also have learned life skills like how to manage my time wisely and how to contribute in a group dynamic.”

As the senior exit, they hope to leave a piece of themselves behind as well. Wiebe continued, “I hope to have helped preserve the primary standard our team lives and breathes: ‘take care of your girls.’ Beyond stats and records, being on a team is about the relationships. I hope whatever records my graduating class sets, they’re broken in the near future, because what will never break is my love for these inspiring young women.”

Zarrella agreed, “Since my freshman year, I have watched this team evolve into a force to be reckoned with in the field hockey world. Be­ing a senior on such a team with such talented and amazing group of girls makes me realize how far this program has come, and also how lucky I am to be a part of it. As seniors, we have the most winning record of any class in the program. I hope that Vassar field hockey con­tinues to win, and become not only a threat in the Liberty League but also nationally.”