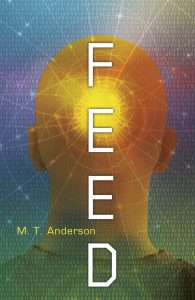 From the deep, dark depths of the Raymond basement on a rainy night just days before Halloween, a dystopia is unfolding one scene at a time. “Feed,” the source of these scenes, is being devised by artists with a goal.

Based on the 2002 Young Adult novel by M.T. Anderson, “Feed” will debut on Nov. 6 and 7. Liam Collier ’16 is the director and Irene Tait ’16 is both Stage Manager and Assistant Director.

Anderson’s original novel takes place in a world where consumerism and technology dominate everyday life, with a direct connec­tion to computers ingrained in people’s brains from birth. In this dystopian world, Titus, the teenager who narrates the story and a victim of this mind-control, encounters Violet, who inde­pendently thinks and questions the overbearing force of this uniform feed. Satirical of modern so­ciety and its tech obsession, Anderson provides a world that is not too far off from the world we live in today.

Describing what first drew him to this book, Collier recalled, “I read the novel when I was in seventh grade. My dad’s an English teacher and recommended it to me. It had a big impact on me and it’s kind of stuck with me ever since. So when I started getting more into immersive the­atre, my mind went to Feed. It’s always struck me as a very theatrical text.”

The production team intended to create a show that touches on the original work but can still stand on its own two feet. For example, the concept of gender was accentuated for this production, with added gender-blind casting. Yvette Segan ’19 and Miranda Amey ’19 both play characters that were initially males in the book: Link, a very alpha-male type, and Marty, who dis­appeared early on and so it was left to Amey to expand the role.

As the production moved forward, more dis­cussions among the creators altered its path. Collier remarked, “We’ve had so many conversa­tions about gender in this show and in this world. I don’t know what M.T. Anderson meant to do but he wrote a very gendered book about what men do to women. And the conversations we had about that and about this world I think took the show in a completely new direction early on…it’s a major element behind our show even if it’s not overtly discussed that much. We transformed characters and thus transformed plot lines.”

Although Collier is the director, the produc­tion a true collaboration. The main priority has been for the actors to establish their characters. Explaining the very democratic environment, Assistant Stage Manager, Kate Spence ’18, said, “Everyone listens to everyone’s opinions. Even though Liam’s the director, he listens. Actors play a huge role in their characters, stemming from their energy. There are texts that are drawn di­rectly from the text but there hasn’t been a script. The priority is that the characters are first, the world is second, and the dialogue comes after.“

Much of the rehearsal has been based around character work and improvisation, with Spence recording the dialogue that both the directors and actors have created through this technique. Lexi Karas ’17, who plays Calista, was initially off-put by having to improvise, but has grown comfortable with it: “I’m not somebody who does improv. I’m usually fairly uncomfortable; I’ve been slowly shaken from that as my time at Vassar has gone on. This has been the first time it really felt different. It’s so different improvis­ing when I know this character and it’s just this character being in a different situation. So, really leaning into that and being comfortable with that has been what’s made the difference.”

Adding on to the creative experience and growth, another actor in the show, Yael Haskal ’19 replied, “We’ve finally come to a place with our characters that we can talk as if we are them and have a natural synergy and how it makes sense.”

The role of the audience will be redefined as well. Viewers will not just be sitting and watch­ing. Multiple scenes will go on at the same time in different rooms in Raymond’s basement so that it will be up to audiences to decide what they follow. As Karas described, “It’s a choose your own adventure brought to life.”

To further plunge the audience into Feed’s world, the production team also plans to utilize sounds. Tait explained, “We’re planning on hav­ing the audience members bring their phones and headphones to the show and we’re going to give them a link. Basically, they’ll be accessing a live streaming, which is where they’ll be getting all the sound from and where they’ll be hearing a lot of lines that are being said between these characters telepathically using the technology that exists in this future. So we’re just bringing in that kind of audience participation into what would usually be just static for theatre.”

During the whole process, the team members comprehensively explored this world, hoping to present an illusion in place of the reality. Each member believes that this work is not to answer, but rather, to ask the questions of society, giving the audience members the tools to chisel away at what binds them to technology.

Collier concluded, “It’s kind of confronting the standard form of theatre where you’re only given one narrative and told what’s happening, where­as with this piece as we’re talking about engaging with the audience, the audience has to choose what story they’re going to follow and choose which character interests them. It’ll lead to every audience member having a completely different experience,” he continued, “Ultimately, I think this piece is about complacency and rebellion and asking ‘What would it take for you to rebel?’ or ‘What would it take for you to stand up against what’s happening all around you everyday at this college or in this world or in your day-to-day life because it’s so easy to be complacent.’ And this show is all about what happens when everybody makes that choice.”