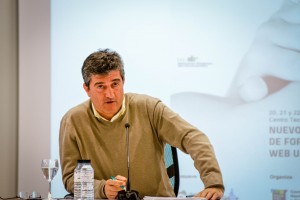 The “Jon Stewart of Spain” is how Chair of the Hispanic Studies Department Eva Woods cordially refers to her friend, screen­writer Guillermo Fesser, who is going to deliver a lecture at Vassar College on Nov. 10, 2015. The event, which will take place at 6 p.m. in Taylor 203, includes the screening of his award-win­ning film “Bienvenidos” (2015), followed by his lecture titled “Surfing Between Reality and Fic­tion.”

Fesser is a media figure in Spain well known for his integration of humor into news reporting. Having studied journalism at the Universidad Complutense de Madrid and Film at the University of Southern California, Los Angeles, Fesser has been involved in a wide variety of media branches—radio, tele­vision and film. The renowned screenwriter has given lectures at Harvard and Wesleyan. At Vassar, Fesser will focus his speech on character building and humor in storywrit­ing.

Fesser’s previous visit to Vassar proved fruitful, according to Woods, the main orga­nizer of the event. As she recalled, “Guillermo is a multi-talented artist, writer, film and me­dia producer. I brought him before to speak to a seminar in Hispanic Studies. The students loved him because he was very down to earth and interacted a great deal with his audience. Because he is also a professional comedian, he is great fun. Moreover, he has tremendous experience overseeing and producing major film, media and theatrical productions, and has written scripts and novels, and multi-me­dia interactive children’s literature and com­ics. Guillermo can connect with students in the humanities who are also navigating fic­tion and non-fiction, different media, and the personal and the public.”

The lecture will focus on the subtle bound­ary between fiction and reality. Woods ex­plained how this theme came about. “Orig­inally I invited Guillermo because he was going to discuss the issue of translating hu­mor between Spanish-speaking and English speaking cultures, which I thought would appeal to anyone who has traveled abroad or tried to represent themselves in a for­eign language. But recently he finished an award-winning short film on the issue of lap­top technology in rural Peruvian schools. In this film he relies on a technique he used in other films, which is to draw on real people and their lives to make a film that is both fiction and reality. I’m very interested in the fine line between the two and how our reality is often a mix of these two constructs,” she said.

Humor is a big part of Fesser’s media persona. It is the trademark of Gomaespu­ma, a radio program he was hosting for 25 years, which brought him to great fame. In an emailed statement, Fesser said, “Humor is the sugar that Mary Poppins puts on the pill to help the medicine go down. Humor is mod­esty and because of that, it creates a friendly atmosphere to discuss any serious matter. To me humor is a vehicle, never a destination.”

Inma Donaire, a friend of Fesser, comment­ed on this aspect of his writing and filmmak­ing style, “I find very interesting his point of view concerning current events, which is very insightful and truthful, yet at the same time always able to find the ironic, comic side of the situation. I have seen ‘El Milagro de P Tinto’ and ‘Candida,’ two very different films which I liked very much. Both are told in a humorous, refreshing manner and main­tain a level of tension throughout, which is not easy to do.”

Also a screenwriter and novelists, Fess­er enjoys the creative search for words. He noted, “Writing is the art of translating inter­nal emotions to words. Very challenging to find the accurate words, the right rhythm to make a reader experience those feelings. The search for that format is what fascinates me the most: editing.”

In his lecture, Fesser will stress the central role of characters in story writing. “The most important part of the story are the characters. The story itself doesn’t matter if the player is interesting. I’ll argue that every human being has a formidable biography, so any character is good. I will also argue that fiction reaches more public than nonfiction. So I will show my narrative way, real stories based on fic­tional facts.”

Elaborating on this, the “Jon Stewart of Spain” noted, “Normally, writers produce Fiction based on real facts. I do Real stories based on fictional facts. What is this? Basi­cally it is a way of using real people playing as themselves, but in situations that would be possible (credible) but are invented. So the content is real, but I wrap it in the format of a fictional adventure.”

“His interviews and stories are witty, dy­namic and transmit a genuine enthusiasm for his subjects. He also displays a deep under­standing of the issues, which he addresses without drama. He is an agile storyteller,” said Donaire.

Talking about some projects he is current­ly doing, Fesser noted, “I have a collection of children’s books in Spanish that some U.S. elementary schools are using for reading in their Spanish class; and I’m writing a new story with the same characters. Also, I am writing a script based on the life of a New York City barman that I hope will soon be­come my second feature as a director.”

Having participated in multiple roles of film production, Fesser will speak from this multi-aspect experience at the lecture. Woods said, “I have no doubt that people will laugh and enjoy this event. They will also have an opportunity to reflect on how tech­nology is changing our world and to talk with others about these changes in the question and answer session.”