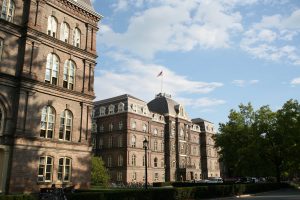 Landing a job in finance is tough, but the hardest part might be the first step—breaking in to the in­dustry. As students repeatedly hear, networking can be the keystone to success in finding any job.

That’s especially true in the close knit and highly competitive world of finance. For Vassar stu­dents interested in gaining access, alumni are their best bet. That’s why on Nov. 8, the Vassar College Business Club (VCBC) will host a panel of alumni from the financial sector in Taylor Hall 203.

The co-president of VCBC, Ste­ven Mages ’17, encourages all in­terested students to participate as there might not be another panel like this for some time. Mages men­tioned, “We usually only do one panel a year.”

So it’s a rare event, but why is it an important one? Mages mentions two reasons to attend: information about careers in finance, and net­working opportunities.

“We wanted to give younger stu­dents a chance to learn about some of the different possible career op­tions within finance,” He said. He went on, “Beyond that, there will definitely be an opportunity to network with the alumni who have kindly offered to come back.”

VP for Alumni Relations, Samuel Hammer ’17, utilized those all-im­portant alumni networking skills to coordinate the event. Hammer, who has always been interested in forg­ing relationships with alumni and older students, found his outlet in the Business Club his freshman year.

“I decided to join the Business Club origi­nally as a way to learn from the senior leaders and the various alumni speakers about poten­tial career opportunities. The club has had some great speakers in the past that have really opened my eyes to what is out there after Vas­sar,” said Hammer.

Now a junior, Hammer hopes with this panel he can pay it forward and help others on their path to a successful career in finance. “The most important thing for students to take away from the panel will be advice for leveraging your Vassar connections,” He said.

He went on, “It is quite competitive and it will be good for current students to hear about how someone with a liberal arts background can be successful in interviews and applica­tions.”

This year’s panel will include Greg Kantrow­itz ’08, Ricardo Espinosa ’14 and Sida Fang ’15. Kanthrowitz is the current Vice President of the Global Power Team within Corporate and Investment Banking at Citi. Mages said, Kan­throwitz is very excited to return and speak with students.

The most recent graduate, Fang, works as a consultant for Ernst & Young’s advisory prac­tice. “Sida is part of the Financial Services Of­fice group whose clients include investment/ commercial banks, asset management firms and big financial service providers.” Mages said. She has been working there since gradu­ation.

Since entry into her job, Fang has worked on two projects. “One is a compliance change and restructuring project in a global investment bank. The other is an anti-money laundry due diligence review in a major commercial bank. Fang will be able to give current students an idea of the recruiting process for consulting firms as well as the work that they do,” Mages explained.

Don’t let these intimidating titles scare you off, however. The Business Club would love to see people of all majors attend these lectures to learn all that they can about the professional world.

Economics major Benjamin Kurchin ’16, cer­tainly expanded his web to get a better idea of where he hoped to ultimately end up. He began his job search using the Vassar alumni network.

“I spoke with around 60 alumni in the indus­try, some on multiple occasions, to seek advice and hear how they broke in, to hear more about what they do specifically (to help get a sense of what I would want to do) and in some cases, to help get an interview at their company, which usually entailed them forwarding my resume to the recruiting division.” Kurchin said.

He went on, “All this said, it’s not an impos­sible task to get a good finance internship, and any motivated student who’s willing to put in the work will find themselves successful in their pursuits.” Kurchin said in an effort to give hope to those students willing to get serious.

After applying to around 80 internships during the summer after his Junior year, Kurchin successfully landed one at Jane Street Capital, a proprietary trading firm. He’s been offered a full time position there for after grad­uation.

Internships are a way to figure out what type of job is the right one for you. At the same time, they can help you figure out what you don’t want to do. During many alumni panels, hosted by any club or department and for alum of any profession, the alum will often reiterate that in­ternships are mere guidelines.

The upcoming alumni panel is only a part of the business club’s overall goal of supporting students succeed in the industry. Hammer said, “this year, one of our primary objectives was to tailor to the needs of the student. We really want to be open in our willingness to help. We have held general body meetings or workshops aimed to help students with networking and resumes.”

In addition to joining the Business Club or attending their events and workshops, econom­ics students with an interest in finance might look to their faculty. Kurchin named a few pro­fessors who have experience working in the fi­nancial sector.

The Vassar alumni, and professor, network is here to offer their support. They went through the same trials and tribulations that current students are beginning to face. By offering the annual alumni panel, the Business Club mainly hopes to strengthen relationships with Vassar alumnae/i. Being able to hand your resume to a specific person could give you a huge boost in any job market. Sometimes, just having the Vassar College name on that piece of paper isn’t enough.

It would seem that opportunity abounds for Vassar students interested in careers in finance. Certainly though, a strong initiative is required. The three panelists joining the Business Club in Taylor Hall 203 for a couple hours on Nov. 8 will provide a unique opportunity.

Hammer hopes interested students will be in attendance, “This is a particularly special event and I hope a lot of people will show up.”