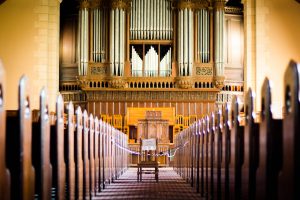 Early in the afternoon following sing­er-bassist Thundercat’s much-antici­pated performance in the Vassar Chapel on Saturday, Oct. 24, members of Vassar Catholic Community (VCC) entered the building to begin preparing for the weekly Sunday Mass. What the worship­ers discovered, however, was less than holy.

The Chapel had incurred some visible damages after the Thundercat concert organized by Vassar College Entertain­ment (ViCE) the night before. The seat­ing areas, particularly in the center aisles towards the front of the building, were in poor shape, the racks on a number of pews had been broken, and there were sweat towels and pieces of trash littered throughout the room.

Those that witnessed the scene were shocked, and many worried if there would be enough time to clean up the mess before the 5 p.m. Catholic Mass. “It was distressing,” remarked Associate Professor of Music Christine Howlett, who saw the state of the Chapel first­hand. “Very distressing.”

Even more distressing to many, how­ever, was the state of the Chapel’s prized centerpiece, the Gress-Miles organ. Built in 1967 to occupy the space of the Chap­el’s original organ from 1904, the Gress-Miles, which features a hand-carved facade, 99 stops and almost 6,000 pipes, is the largest organ on campus, and is to many nearly as sacred as the Chapel itself (Vassar Music Department, “Pipe Organs at Vassar”).

This afternoon, however, the Gress-Miles was an object of great concern rather than of great admiration. According to Director of Reli­gious and Spiritual Life Sam Speers, the pedals for the organ console had been removed and were found lying across the chapel, the front set of keys of the instrument had been bent back to a near-breaking point and the entire area was covered in garbage. “The tampering with the Chapel organ was very disturbing as the organ was filthy and dismantled,” Assis­tant Dean of the College for Campus Activities Teresa Quinn commented in an emailed state­ment. “The stage was not necessarily designed for these types of performances, as the organ is a fixed structure and can not be moved or compromised, limiting the performance area. Damage to the pews and other areas is most likely related to crowding in the front section.”

In response to the significant amount of damage to one of the more revered buildings on campus, an emergency administrative meeting was organized between Quinn, Speers, mem­bers of the Music Department faculty including Howlett, VSA President Ramy Abbady ’16 and Acting Dean of the College Ben Lotto.

According to Abbady, the purpose of the sud­den meeting was to clarify the information each had received before any action would be taken by the College in response to the incident. “At that point, there were a lot of different sources of information. There were stories from Safe­ty and Security, stories from [Buildings and Grounds Services], stories from people from the Music Department…” he remarked. “We just needed to figure out what exactly had hap­pened.”

Since then, VSA Activities Committee has taken up the case, and has been engaging in closed conversations with ViCE to determine what happened, who is responsible and how those involved are to move forward. Although rumors have circulated about the possibility major sanctions being imposed upon ViCE for hosting an event that resulted in such heavy damages, according to VSA VP for Activities Kevin Pham ’18, no serious actions have yet been decided on.

Quinn echoed Pham’s uncertainty for the future, explaining that although nothing is yet certain regarding the College’s potential response to what happened, this incident has provoked a conversation within the Adminis­tration regarding student-organized events in the Chapel. “We are certainly taking a pause to re-evaluative policies for appropriate use of the Chapel by student organizations, and also to determine how best to proceed with future use of the space.”

Some students, however, remain outraged by the incident and have argued that what hap­pened was inexcusable and worthy of serious action. Sarah Rodeo ’17, herself an organist and a member of the VCC, argued that what occurred is evidence for an argument against holding such types of events in the Chapel. “Concert programming of this nature ABSOLUTELY should NOT occur in the Chapel EVER again,” she wrote in an emailed statement. “The build­ing and its contents are old and cannot handle the type of behavior (standing on pews, mosh pits, pregaming, drugs and alcohol) and large quantities of people that concerts conducted in this style of music attract. Concerts of this nature should be held outside or in the Walk­er field house or in the Mug or in the Villard Room. Those spaces’ facilities can handle it better.”

Rodeo went on to note that what happened at the Thundercat concert was not an isolated incident, but rather an example of a lack of re­spect on the part of many students for commu­nity spaces on campus. “This is NOT an isolat­ed incident. There is a huge issue on campus with disrespecting public spaces,” she asserted. “[I] want to point out that there is a plaque on the outside of the chapel. It reads: ‘given for the worship of God at Vassar College.’ I do believe that the donors who gave the chapel to this campus 150 years ago did not foresee rock con­certs being held in there.”

Although, given the opacity regarding the responsibility for the incident, Speers main­tained his ambivalence as to what the appro­priate course of action may be, he offered that what happened to the Chapel has, in spite of its obvious drawbacks, stimulated an ongoing dialogue regarding community spaces on cam­pus. “What does it mean to have structures in place that we need so that we both understand and practice what it takes to live together in a community where we share these spaces?” he wished to asked the campus community.