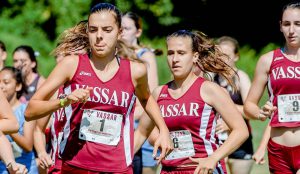 Through rain, sleet and snow, in the blazing heat and frig­id cold, the Vassar cross country team has run and run hard. Despite their determination and success, these dedicated runners would not be anywhere without their coach. James McCowan has served as head cross country coach to the Vassar College Brewers since 2005 and has instituted a strong coaching philos­ophy to instill and drive both the men and women’s teams to success. This year, he feels both teams show lots of promise and depth, explain­ing, “The whole season—and each individuals career—is a process of developing physical and men­tal characteristics for season-long and life-long success.” The teams entered the year talented, yet quite young. Still, in spite of their youth, the 2015 season has certainly pro­vided the Brewers with ample op­portunities for such success.

This past weekend the Vassar College team traveled to the Liber­ty League Championships in Can­ton, N.Y. hosted by St. Lawrence University. There, they finished fourth out of seven teams in the 6K race. This was the first time any member of the current team had run on this particular cham­pionship course. In addition, the Brewers faced some very tough and strong competition. RIT is na­tionally ranked No. 17, St Lawrence No. 18 and RPI is ranked No. 22. So with all of these aspects under consideration, the women’s team ran a particularly strong race. The top finishers for the Brewers were freshman Christiana Prater-Lee (23:50.29) in 20th place overall and senior Ava Farrell (23:51.29) in 21st place overall. Sophomore Katie Voegtlin (24:04.83) followed Farrell in 26th place overall, with freshman Cameron Daddis (24.08.20) tailing close behind in 27th place overall. The final Brewers teammate to score was junior Jemma Howlett (24:10.03) who finished 29th place. This was good preparation for the upcoming ECAC Championships in Williamstown, Mass. where the team will hopefully leave its mark.

Prater-Lee spoke about the team’s goals in regards to the Championship, “Our team goal was to put up a good showing against RPI, St. Lawrence and RIT to prove we belong at the same caliber as these nationally ranked teams. We have been doing workouts at race pace effort to ingrain that pace into our bodies.” This hard work and dedication has paid off for Prat­er-Lee as she has been solid all sea­son. She is the only runner on the team to finish in the top three of every race for the Brewers this fall. Howlett has also had a very successful three solid seasons with the Brewers. On top of her strong performance at Liberty Leagues, she recently finished second among VC runners at the Seven Sisters Cham­pionships. Howlett agreed with Prater-Lee’s sentiments and spoke highly of her teammates, “The team has the talent to perform well and be up there—we just need to stay confident and positive. Both Ava Farrell and Christiana Prat­er-Lee have both been huge front-runners for us this season.” Sophomore Eliana Tyler con­curred, “As a team we went into the weekend focused on being competitive with the teams at the top of the League. The top three teams (St Lawrence, RPI and RIT) are all nationally ranked so we knew that we would have to work hard to break up their packs.” The team certain­ly displayed their level of talent and dedication this past weekend.

The Vassar College men’s cross country team also ran their Liberty League Champion­ship run in Canton, N.Y. this past Saturday, and the men’s team finished fourth as well. Soph­omore Michael Scarlett finished 11th and also earned All–Liberty League Second Team. Scar­lett finished the 8K course with a recorded time of 26:27.76. He has been the top runner for Vas­sar Brewers in every race this year. Scarlett is not only excited about his own success but also that of his teammate’s, explaining “My favorite memory so far this season was watching fellow team member Kyle Dannenberg run under 30 minutes in the 8k for the first time. As a senior, he has shown his commitment and persever­ance over four years, and for him to accomplish his goal was inspiring to see.”

Scarlett continued to discuss the preparation necessary to face this level of competition: “To prepare for our championship races, aside from growing out our facial hair, we are mentally preparing for a strong finish to the season. Our team is continuing to train with the same atti­tude as have all year: with an intense focus on our upcoming races.” In addition to this sense of humor, Scarlett brings a very positive and team-oriented attitude to his cross country pur­suits. “Everyone on the team agrees that the fall brings three great things: foliage, the Patriots, and cross country season. It is our favorite time of the year, and we get to spend it with each other. Together. As one. A family”.

The men’s team is a young team primarily consisting of freshmen and sophomores, how­ever, they come to championships ready to compete and ready for a championship season. Brown commented, “Winning the men’s team title at our home Ron Stonitch Invite was defi­nitely a very satisfying moment in our season. We’ve also had several workouts that have helped improve our confidence in our fitness, which is very important. We were definitely looking to finish among the top three teams as a distinct goal, but more generally we just want­ed to get out there and compete against the oth­er teams and runners.”

Coach McCowan spoke of his team’s dynamic and mentality, explaining “This year has start­ed out differently for the Brewers, as a sense of beginning anew and working past last year’s [season] has been apparent. The teams are really coming together, we’ve got really close-knit teams, freshmen have integrated really well and upperclassmen have done a great job of including them into the team environment.” Tyler agreed, “What I love the most about cross country is definitely the team. I appreciate how we are all supportive of each other yet know how to grind it out when it is time to work hard. Some of my favorite moments from this year have been during strong workouts we have had as a team. Whether on the farm or at the track, we have had many workouts where we have run as a tight pack and pushed each other to put in a lot of good work.” Howlett echoed Tyler’s thoughts, “I love how we are such an eclectic group of people but we all get along very well. This is my third year on the team and it has definitely been my rock through Vassar. Every­one is so accepting and reliable. I can count on them for anything”. Prater-Lee agreed, “I love how quickly indivisible bonds have formed among this team. We are united through pain, perseverance and personality”.

Now both VC teams move onto the ECAC Championships on Nov. 7 at Williams College, then the NCAA Atlantic Regionals follow the very next weekend in Geneseo, N.Y. The sea­son culminates at the NCAA Championships in Winneconne, Wis. on Nov. 21. The teams are prepared through consistent hard workouts. Brown spoke about the team’s continued effort and commitment towards success, “We usu­ally have a couple of workouts a week where we run intervals of a particular distance at what we call ‘goal pace,’ which is the pace our team would have to run to qualify for nation­als. Those workouts are big in terms of build­ing strength and endurance as the season goes on, and they’re also big in terms of building our confidence. We also have a couple of more steady-paced runs during the week that are less strenuous than the workouts and more focused on maintaining our endurance. The satisfying feeling after having a really good workout or race is probably one of my favorite feelings of the sport, and I imagine everyone else’s.” The team is still young, but dreams of success are not far-fetched. The Brewers hope all of this hard work and camaraderie will pay off as both teams move to the final stages of their champi­onship season.