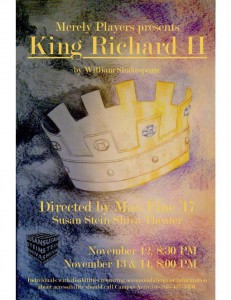 Satie’s ‘Gymnopédie No. 3’ plays to intermit­tent static in a world void of time and place while Rob Leinheiser ’16 as Richard shrieks with fully gripping emotion for the music to stop, filling all in the room with a catharsis rare to spawn and a sympathy delicate to possess. This is not “Richard II” directed by Max Fine ’17, but rather Max Fine’s “Richard II.”

Produced by Merely Players, Vassar’s stu­dent theater organization that mainly focuses on classic plays, “Richard II” is going up in the Susan Stein Shiva Theater on Thursday, Nov. 12th at 8:30 p.m. and Friday, Nov. 13 and 14 at 8:00 p.m.

“Richard II” follows the eponymous char­acter in the process of losing everything after being deposed as king, as a result of the hor­rible acts he committed in power. Living in his world of pomp and circumstance, Richard watches himself get left behind in a kingdom overtaken by Henry Bolingbroke, the future Henry IV, who reclaims the inheritance sto­len by Richard when his father, John of Gaunt, died.

Fine described what drew him to this pro­duction, commenting, “In high school as a se­nior, I took a class on Shakespearian literature and in that we read one history play and that was actually the first part of ‘Henry IV.’ Rich­ard was referenced a lot throughout that play. I had the play already but didn’t get around to reading it until last summer when I decided to read all eight of the histories, starting with ‘Richard II,’ over the course of seven weeks back to back. And I found that I really fell in love with ‘Richard II.’ It moved very quickly. If not cut properly, it can feel like a long play, but on the page it feels almost as if no time has passed. And so I fell in love with it. It’s a very beautiful show.”

“Richard II” is the first play in Shake­speare’s tetralogy of histories referred to as “the Henriad,” which also includes “Henry IV” Parts 1 & 2 and “Henry V.” Despite this association, it is not one of Shakespeare’s most popular plays, especially now. There have been only a few notable performances in the last century. Richard himself has been portrayed by Kevin Spacey, Eddie Redmayne and David Tennant.

Set designer and the actor playing Bagot and the Keeper, Jarek Lenda ’18, agreed on the rarity of a “Richard II” production, com­menting, “It’s not a show that I think gets seen often, or at least it’s not that well-known amongst the college crowd. We don’t study ‘Richard II’ in high school so it’s not some­thing you go to college knowing unless you took a Shakespeare class. There have been a lot of bigger performances on stages but those have been in England or Broadway and have been expensive to go to and something you might not choose to see. This is an op­portunity to see a Shakespeare play that you might never see again.”

With few actually knowing what this play is about, this obscurity allowed for Fine to alter the play in a cohesive manner, cutting back and rearranging to allow this showcase to re­main just as powerful while running around two hours instead of almost three. A few char­acters have been removed and several scenes have been combined, but in no way did Fine change the plot for time’s sake. Since Shake­speare’s lexicon might be difficult for a mod­ern audience, it is beneficial for this focus to become narrower.

“The Wes Anderson movie ‘Grand Buda­pest Hotel’ actually served as a lot of inspi­ration for this concept. The idea has been playing around with a world of color fading to this desolate almost colorless world. There was this great line in the movie about how the character Gustav lives in an illusion of a world that has long since vanished. And I think Richard sort of occupies a similar posi­tion.” Fine said about his design, “It’s going to start off very colorful. The factions are going to have different colors. It’s more of an early 20th century thing because you witness sim­ilarly the breakdown of a world between the two world wars.”

Despite the difficulty in performing Shake­speare, a good cast can make his words com­prehensible to even a child. And Fine believes he’s found the perfect cast, explaining, “I’d like to take the audience on an emotional journey with Richard and with Bolingbroke. And I think this cast is certainly doing that to the utmost. They are extremely talented. They have been a dream to work with. The amount of times I have taken notes in rehears­al saying ‘I could feel my heart break’ or ‘I couldn’t stop laughing’ has been quite often.”

As any actor will tell you, there are add­ed difficulties in performing a Shakespear­ean play than a contemporary one. Clarifying some of these challenges, Dorian Oberstein ’16, who plays John of Gaunt and Young Hotspur, said, “It’s very difficult to memo­rize, which was strange because I’m usually very good at memorizing and the language comes naturally. But it’s been very difficult to get into the right rhythm of the lines with­out compromising my acting. And doing both things at once is like patting your head and rubbing your stomach at the same time. Even­tually, it became natural but it became a much longer process to really access the language while retaining intention and motivation.”

Even though there might be trouble in speaking the language, the cast is certain that the message of the show is ambiguous, espe­cially in where one’s sympathy should lie, es­pecially in how they feel about Richard.

“I think what’s really important about this show is the characters are just incredi­bly complex in that there’s really no one you should be rooting for in the beginning. It kind of seems like you could be rooting for Boling­broke but after seeing Richard’s eventual col­lapse, there’s so much sympathy there and seeing when Bolingbroke eventually rises to power, he’s not as sympathetic,” Oberstein re­sponded. “You think that they have it all and everything’s made for them but there’s a lot of danger, hardship, and difficulty with hav­ing so much power.”

Overall commenting on the uniqueness of this production of “Richard II,” Lenda said, “The great thing about Shakespeare is that you can really interpret it a bunch of different ways that isn’t just defined by one production. So this is very much Max Fine’s interpretation of ‘Richard II.’”

“I hope they enjoy it. I hope they are emo­tionally invested.” Fine summarized. “It’s a very beautiful show.”